The Pirates of the Caribbean: On Stranger Tides 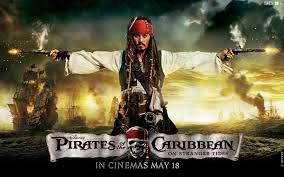 On opening night last Wednesday, we treated ourselves to a mid-week cinema trip. So a quick dash to Tescos to stock up on maltesers and popcorn, quickly dress up in our favourite pirate outfits, and away we drove to Yeovil (our nearest decent cinema) to watch the new Pirates of the Caribbean film. This is what I thought of it…

Oh I just loved it! Will Turner and Elizabeth Swann were definitely missed, but on the plus side this meant more screen time to Johnny Depp, as Captain Jack Sparrow, which is a big bonus. I enjoyed the plot, which I think made more sense than previous films and was a lot less complicated to follow! The classic sword fights were there with Jack and Angelica almost emulating Jack and Will’s in the first film. Angelica being the new character played by Penelope Cruz and Jack’s tempestuous love/hate interest. She annoyed me less than I expected her too – I don’t know why I did – I think it’s because her accent gets on my nerves a bit! Hopefully we’ll see more to her character in the next film – the constant angriness meant I didn’t warm to her at all.

The special effects were fantastic as usual. I loved the mermaids and the story between Syrena and Philip, the captured seafarer.  This was left unfinished though, so I really hope that will continue with the next film. They were kind of needed as without Will and Elizabeth, there was a noticeable lack of younger characters to appeal to the younger audience. There will be a next one won’t there? There were so many set-ups for continued stories, there has to be!

A note on the 3D issue. We decided in the end to watch the film in 3D as it was filmed specifically for the purpose. I’m the only one in the family who has to wear glasses for the cinema, which does spoil the enjoyment a little as the additional 3D glasses get heavy and uncomfortable. Also, I don’t know if other people get the same problems as I do. For example, the scenes in London at the beginning – which I loved – were so fast, I almost couldn’t keep up with the action. I think they went too far in making backgrounds and foregrounds blurry in order to enhance the 3D experience – I found it extremely annoying. I was trying to spot places in London I recognised and also minor British actors, but there was no chance at all because they were blurred out completely so that you were forced to only watch the main action going on. My husband didn’t mind this at all though. However, I’d be interested to see whether the 2D DVD when it comes out, has the same effect.

On a more positive note on the 3D: it has vastly improved since Avatar, which is the only other one I’ve seen. And when you did only watch the main action, the effect was quite amazing actually.

If you haven’t been to see it yet, don’t forget that there are a whole lot of pirate outfits for sale at Oshun perfect for wearing to the cinema for a bit of extra fun 🙂