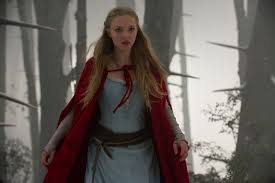 I finally watched this film yesterday after waiting ages. We saw the clip at the cinema when we went to see the last Harry Potter film – I couldn’t wait to see it ever since. This is what I thought…

I loved it! I loved the costumes, the atmosphere, the setting, the feeling of the village – it was so perfectly fairytale. It was a bit like a classic murder mystery. The crime happens early on and the killer is known – it’s simply a matter of tracking he or she down. You’re led to believe it’s one particular person, and due to that, you know it probably isn’t him. There’s a second choice too… SPOILER ALERT (though not a big one!)…

But the ending is quite satisfying as I hadn’t guessed who it was. My daughter and husband had been suspicious though.

Whilst I really enjoyed the film, I do have a couple of criticisms. It could have gone one of two ways: full on Tim Burton style where you just take weird and wonderful things in your stride. Or it could have been like A Knight’s Tale – medieval but with modern twists. I thought it was going to be like this early on in the party scene  with the cool dancing. However, it never really went one way or the other. It was sort-of in between.

The plot didn’t flow right. You realised you were near the end by looking at your watch, not by the build up of tension towards a climax. The story just didn’t go as far as I expected. It could have been better.

Also too many people died. That wasn’t necessary.

Having said all that, I would still recommend the film, especially if you like fairytales or fantasy. Teenagers will love the romance thread as well.