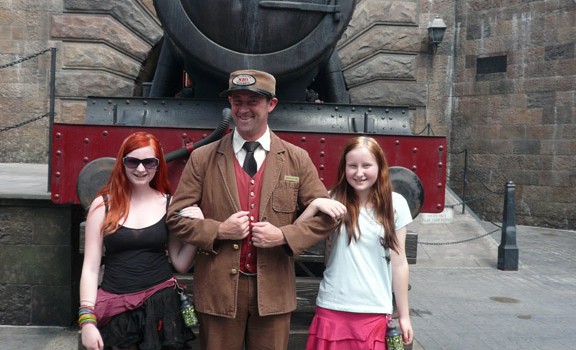 This was the thing that did it for us. In the past we may even have been a bit snobby about other people who went to Orlando on holiday, (that sort of holiday wan’t our thing,) but when they made Harry Potter World our opinions changed entirely. I mean, it’s Harry Potter World! Read on for reviews and tips.

It was the first place we went on the first day. Annoyingly we were told we had to go back to the place we got our villa keys to register. All they wanted to do was sell us timeshare. Came away from that extremely annoyed it had ruined our schedule for no reason. I had planned to be there at opening time in order to rush to the Forbidden Journey ride. This is the main 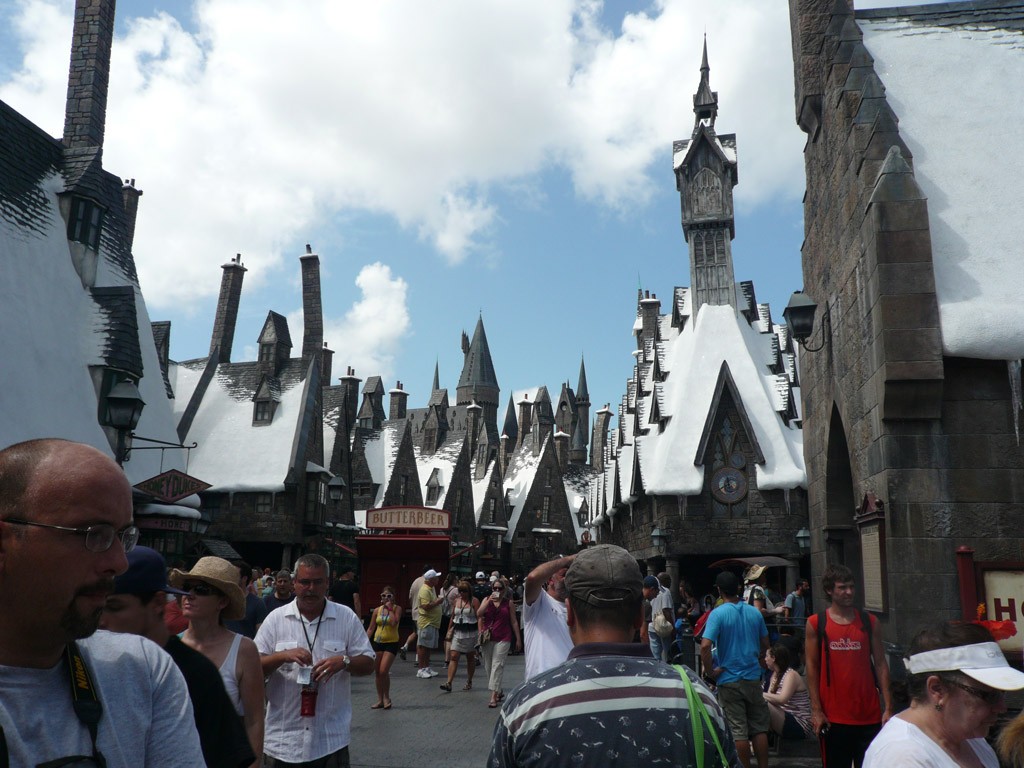 attraction – the queue takes you through Hogwarts and you do an amazing ride at the end. The queue for this is rarely under an hour, and often 2 – 3 hours long – sometimes more if it has broken down. I’d read about this on The Dibb and Chris bought a phone app which tells you the queue times for all the rides in Florida. We’ve been monitoring it for months and knew this was no exaggeration. I’d given up hope of riding the Forbidden Journey until perhaps tea time, because we arrived at noon. I thought there’d be no chance of a less than two hour queue, so we casually made our way through Universal Studios Islands of Adventure, past Dr Seuss land and eventually came to it.

My heart literally bounced! You’re greeted by the Hogwarts Express puffing away steam and jolly conductor with a Dick Van Dyke style cockney accent ready to pose for a photo. I couldn’t stop grinning! The whole place is set up to look like Hogsmead on a snowy winter’s day, though some of the shop names were borrowed from Diagon Alley. There are disappointingly only a few shops you could actually go in: Dervish and Bangs joke shop, Honey Dukes sweet shop and another one, which I think may have been Madam Malkin’s, but sold everything.

Dervish and Bangs was full of magic tricks and silly toys; some of which were mentioned in the books, and some which weren’t. The shelves were stacked high and the packaging was traditionally like a toy shop, but it was very busy in there with narrow aisles, and difficult to stand and just look at everything. Honey Dukes was similar, but I think everything in there had been in the books – chocolate frogs, of course, every flavour beans, bertie botts something or other. The props were fantastic too – exactly how I’d imagined the shops to look like. I can see how many a tourist is enticed to spend more money there than they intended to. Some advice I picked up from The Dibb: don’t bother with the stuff in Honey Dukes – it’s all over-priced and doesn’t taste very nice. The chocolate frogs cost $5 + tax and are likely to melt before you get chance to eat it. It’s worth taking the time to look in all of the windows of the other shops that you can’t go in – there’s something magical happening in every one – pictures moving; sheets of music flying through the air; cauldrons stirring themselves etc. 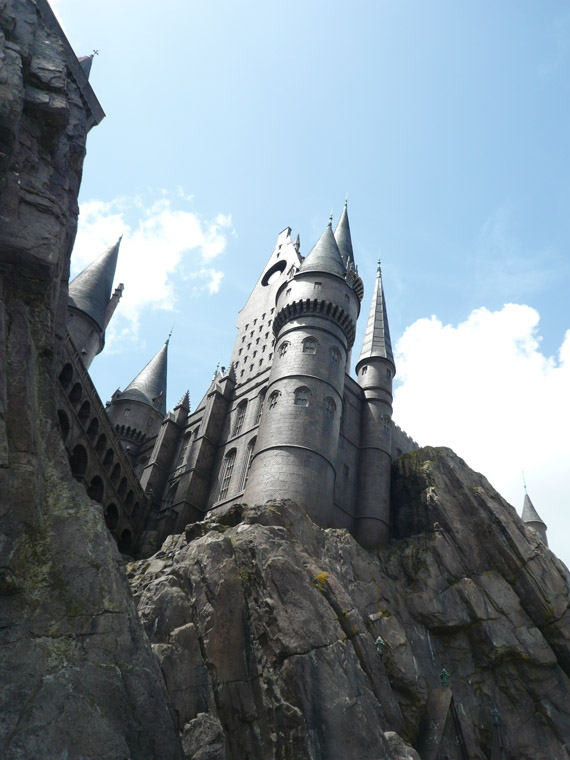 So we walked up the street, taking it all in, and reached the entrance to the Forbidden Journey, where it said the queue time was 20 minutes! We couldn’t believe it! It took the 20 minutes just to walk the length of the queue to the front, so we actually missed out on some of the cool goings on inside the castle. We only caught a small section of the conversation between the portraits in the hall, I didn’t see Dawn French as The Fat Lady talk at all, we completely missed Dumbledore talking and only caught part of Hermione, Harry and Ron’s main bit. It wasn’t until the second time we did the ride I realised they were putting in place the story-line that Hagrid had lost a dragon. All the props, scenery and special effects were amazing, I was just stunned.

The Forbidden Journey ride itself was fantastic. I can’t tell you how utterly amazing it was – words can’t describe it! It’s kind of a roller-coaster, but not really. You’re strapped tightly in the seat, which does move from room to room around the castle, into the chamber of secrets and into the forest, and in each place there are actual props and effects going on around you, but it is also combined with motion stimulator rides so there are parts when you really feel like you’re flying. I can’t imagine there is a better way to feel like that. My 12 year old didn’t like it though because it was too scary. There were a few times when I shut my eyes the first time, and even when I tried to force myself to keep them open the second time, I still shut them for a bit when you’re in the spiders’ lair! So be warned if you have wimpy children like I do. Or if you’re terrified of spiders! If you suffer from motion sickness too, be careful. I felt quite queazy afterwards, but things effect people differently. To be honest, I’d risk being sick for the fun of the ride.

Monarch Airways and The Dibb