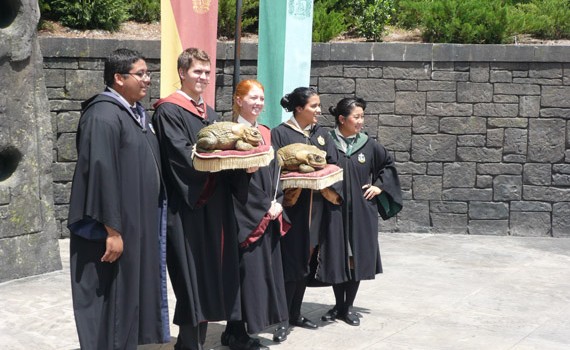 And yes, there is even more to say about this wonderful place…

So, after the first time we rode the Forbidden Journey, the queue for the Olivander’s Experience was also still low. I asked a member of staff who said it was about half an hour long. Now all the advice on The Dibb says it’s not worth it. The queue is usually at least an hour long and you’re very lucky if you’re chosen. The kids still wanted to do it though, so I agreed to wait with them as it was only half an hour. Wrong! We waited from 1pm to 2:15pm in the searing heat of the day with no shade or fans. I knew we’d be next inside, but I literally felt the blood drain from my head and I knew I was 30 seconds from either fainting or being sick. I had to leave the queue and sit in shade with my head down, and gulp down a whole bottle of water (which I had to pay for as no fountains nearby, grrr) Of course, a minute later, Rain and Jude went in to Olivanders. Not only that, Jude was actually chosen to be measured for a wand and I missed it! So cross. Luckily Rain thought to video most of it.

So then we were hungry and ate a late lunch in the Three Broomsticks. Again, good timing as there was no queue at all at

Looking up at 3 Broomsticks

2:45pm. They actually had examples of the menu so that Americans knew what British food looks like! Even so, I had roast chicken, potatoes and a big corn on the cob – not exactly traditional, but very tasty. Rain had fish and chips and Jude had Cornish pasties and salad – both also enjoyed their meal. Weirdly there was a girl sitting near us who looked exactly like Hermione, which entertained us for a while. I tried to sneak a photo, but couldn’t! Even if you don’t want to eat there, you really must go in. The props and scenery is stunning and so perfect. I took a photo looking up where there were staircases and walkways to (imaginary) inn rooms.

We watched the frog choir, which was entertaining, though the conductor’s accent went way off a few times, and I felt so sorry for them standing in the heat in full school uniform – grey jumpers and long socks and black cloaks. Butterbeer was sold from a couple of street sellers and Chris and the kids shared a frozen one, which they liked. I hate anything like that, so didn’t even try it.

The second time we went to Harry Potter World was in the evening, and I’d got the timings wrong and the park closed an hour earlier than we thought – 6pm! Ridiculously early. However, as most people had left, or were eating tea, we were once again able to do the Forbidden Journey with no waiting time. We took our time walking through the castle more though. Afterwards, there 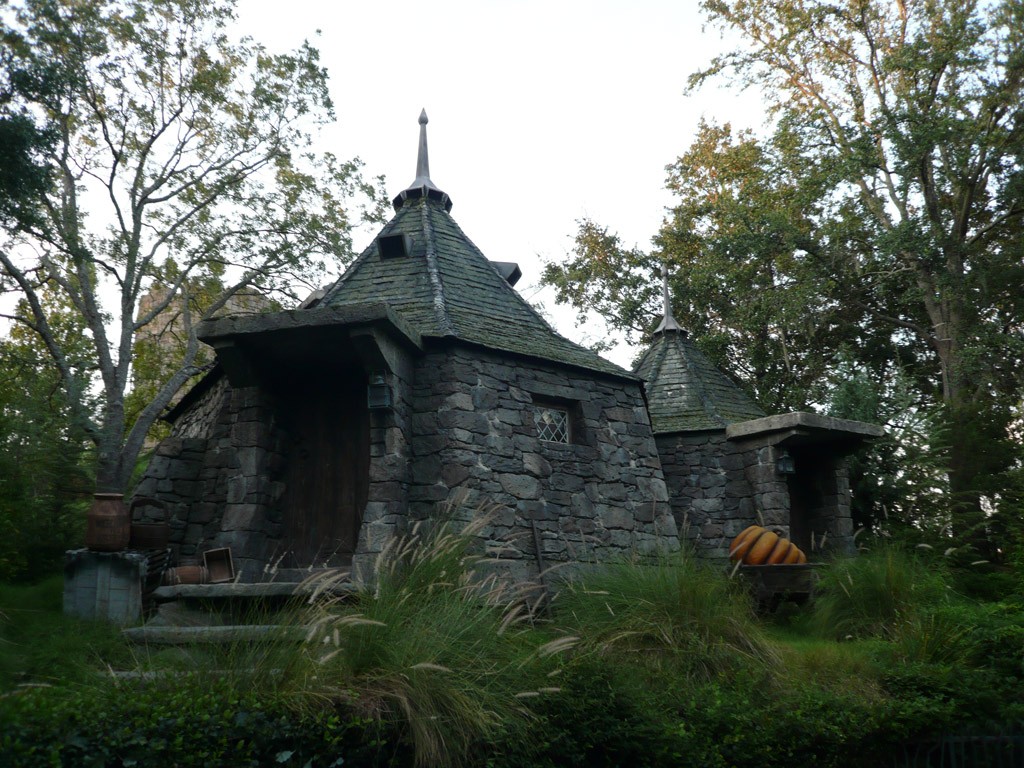 was no queue for the Flight of the Hippogriff ride, so we went on that too, despite people saying not to bother as it’s for 5 year olds. I’m really glad we did though – it was my sort of rollercoaster! Except that it was over too quickly. You did go fairly high actually (well, roof-top high) and you got to see Hagrid’s hut and the hippogriff, which you otherwise wouldn’t.

Everything in the shops is really expensive, but if you’re a Harry Potter fan, you will want all of it, so be warned! We let the kids have a wand each – which they spent ages choosing, but that’s half the fun as you get to pull out all the boxes stacked high up the walls, and there are loads to pick from. I bought a stationary set in a case, which I can at least re-fill with normal paper once I’ve used the Hogwarts printed paper. If you don’t go on the Forbidden Journey ride (though you’d be mad not to), make sure you go in the shop you’re brought out into, as that’s where most of the clothes are, and toys that aren’t found elsewhere in the park. And even if you don’t want to spend any money – still look in the shops as they are amazing. Don’t miss the monster book of monsters in the shop next to the owlery.

So that’s it I think. The sun was setting as we left Hogsmead, which looked very pretty reflected in the pretend snow on the rooftops, but we felt very sad knowing we’d never come back.