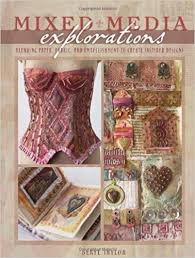 This book is fairly old now, but I only recently discovered it and really hope Beryl Taylor will have a new one published soon because I can’t get enough of her work! Mixed media is a relatively new thing in the UK, but over in America, they’re experts. Beryl Taylor is a mixture of both; living across the pond now, but grew up in England. Anyway, as a brief explanation, mixed media art usually involves a range of materials and techniques, including stamping, painting, sewing, quilting, embroidering, beading, gluing and lots more!

Even if you never intend on getting crafting, I would recommend this book anyway, just to see all the beautiful photos! Her work is just beautiful, and so original – I’d never seen anything like it before. It is utterly inspirational and after a quick flick through the pages I am dying to have a go at the techniques described. I like the fact that she explains how she does things, rather than expect you to follow specific projects. Plus, there are plenty of photos.

The book begins with creating a sponge stamp and bleaching velvet, goes on to tell you how to make fabric paper, use embossing enamel, xpandaprint, shrink plastic, friendly plastic, water-soluble fabric, Shiva paintstiks and several other mediums I’d never heard of before. I’ll warn you now, this book will make you want to buy stuff! I’ve found ebay to be a good cheaper source of materials, and even bought a large bundle of shiva oil sticks for £10 including postage from America. The craft shop in Frome sells a small box for £25!

I’ve had a go at some of the easier techniques and incorporated things like stamping, heat embossing and generally mixing up embellishments in my sketchbook and journal covers that I sell in my Etsy shop. I also tried using wonder under to sandwich fabrics together with sequins. This is such a clever thing! I’m annoyed I didn’t get a photo of it before I used it on a ‘Dream’ book cover which sold at the last craft fair I did. 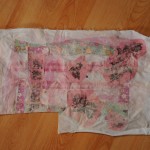 I also had a go at her fabric paper technique, but I don’t think I did it right! This was really difficult because the glue just goes everywhere, and I don’t think I watered the glue down enough because it ended up very stiff. Although Beryl Taylor’s look fab, I think mine just looks childish. So, I’ll probably cut it up and use small pieces in my book covers and I think I’ll leave that one for a while. I’m hoping she will come to the UK to run some courses soon. I also hope I can afford them. You can take lovely luxury holiday courses in Egypt, but as lovely as that sounds, they are way out of my reach..

Anyway, I’m getting my craft things out next week to make my sister-in-law’s wedding guest book, so I’ll let you know how I get on.