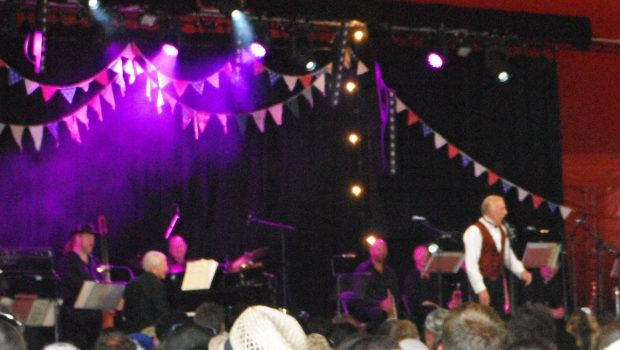 Had a bit of a lie in as the first act we wanted to see was Bruce Forsythe in the Avalon tent. Another silly place to put him – he could’ve easily had an early pyramid slot. The place was jam packed – it was a good job we got there early and saved ourselves a good spot….

I thought he was really good actually. His jokes were funnier than those on Strictly, and he was spontaneous with the crowd too. He really got the audience involved and at one point had 4 blokes tap dancing with him on stage. He gets on my nerves a bit on telly, but I really would recommend seeing him live. He also had Dave Arch’s orchestra with him, which was an added extra.

Then to the Other stage where we caught most of Public Image Ltd. Not my kind of music really. God knows how he manages to shout so much – he must have some really good throat mixture! Chris enjoyed it though.

We more or less stayed at the Other stage for the rest of the day – just wondering off for food and loo trips. Of Monsters and Men was my daughter’s recommendation and I loved them! Definitely my favourite discovery of the festival and will now get their album.

Editors were better than I expected and enjoyed them too, though really we were sitting too far back to enjoy the set properly as people were talking all around us. Then it was Smashing Pumpkins, who I have to say did not live up to my expectations. I got quite bored and left half way through. I didn’t want to go home yet, so I went to see what was going on in the circus areas. A little disappointed actually – the Astrolabe was shut and nothing was happening on the Summerhouse stage either. They’d obviously gone home early as acts were supposed to be on. So I bought a pan au chocolat from Denela’s Bakery (delicious) and sat down in the Big Top for a while.

Angie Mack was doing a hula hoop act when I came in. Very impressive – I’ve never seen anyone hula so many hoops at once, and she had some original tricks with them as well. Then it was Fire Fingers. It was a long act with a very slow start. She spent a long time poncing about and doing little else than set fire to the floor. It did get going with some impressive fire rope poi tricks and then she got a couple of guys from the audience for an acrobatic bit where she set a catherine wheel off on her head! Lots of fire thrown around and was pretty entertaining in the end. After her it was a magic act, which was slow to start so I lost interest and left. Wondered slowly past my favourite stalls, looking longingly at Rosa Bloom, before walking slowly on, stopping to view Mumford and Sons from the top of the hill. They were as dull as I expected them to be, so glad I hadn’t bothered with them. (I like them for 1 song at a time, but more than that is too depressing.) Choked back a few tears and went home.

Introducing the Threads of a Fairytale travelling boutique