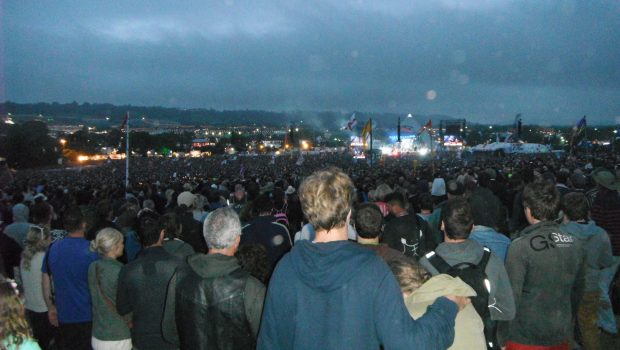 Another hot day forecast, which really messed up my costume plans. Spent ages dithering as to what to wear, so didn’t get in in time for The Infinite Monkey Cage in the Cabaret tent, which was a shame. They had stopped allowing people in as it was so packed….

So hung around the field and watched an awful act on an outdoor stage. He was doing yoyo tricks. The tricks weren’t awful, but he was. I really really hate it when circus performers go on at their audience to applaud them. We are here to be entertained, not to boost your flipping ego! It really gets on my nerves and the more I’m asked to clap, the firmer my arms remain crossed. He said this: “That was a really difficult trick; but obviously not as difficult for you to put your hands together and clap.” This is a fairly common theme amongst the performers on the smaller theatre and circus stages. We saw it again later with some guy climbing a ladder backwards. Can’t these people see that they’re just going to annoy their audience? Can’t they see that’s probably the reason why they’re still only on the smaller stages?!

Rant over. Then we all went to The Astrolabe for Stephen Frost Impro Allstars with Phil Jupitus. This was very funny – I’m so glad they still come to do Glastonbury every year. I was crying with laughter and ruined my make-up for the day.

Then I had another wonder round the green craft field and was annoyed I’d just missed the felting workshop. Walked all the way to the park to see how my things were selling on the Gallery Eight Glastonbury stall. Not bad. Fairly pleased in fact, but hadn’t sold any bottle bags at that point, which was a bit disappointing and surprising considering the hot weather.

Rushed back the cabaret tent for Katherine Ryan, who was very funny. We’d seen her at Bristol though, so apart from the bit she did about Beyonce, we’d seen her act before, which was a shame. Then it was Jeremy Hardy – who I’m afraid I don’t remember very well – I think I was tired out by then. Then it was Kevin Eldon – possibly the next Dr Who – who was also very funny. Then 4 Poofs and a piano, who were better than I expected. Their final song was very rude though and very difficult to get it out of your head afterwards!

So, then met up with friends for Primal Scream. Primal Scream weren’t that good, so glad to have friends to talk to. Continued to chat through the hour long wait for Rolling Stones. It was a good job they did save that extra bit of field as the place was packed right to the back. Once they started that 20 minute instrumental though, people left and we had more room. We had to be there to watch Rolling Stones – the chance wasn’t going to happen again, but they weren’t amazing. They extended every single song by 10 minutes so you were always bored by the end of it. And there was that 20 minute instrumental! We left before the end to avoid the crush to leave, but it did mean we missed You can’t always get what you want, which was a pity as we’re big House fans. And, of course, we missed Satisfaction, which is probably the only song the kids knew due to Britney Speares’ cover. Shame, but not overly bothered. They were good, but not great.