The Hobbit – Battle of the Five Armies 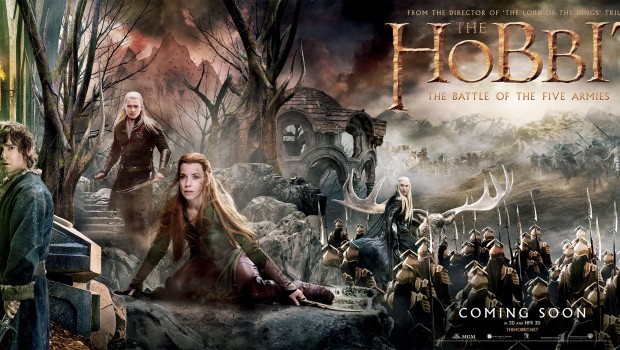 Last night we drove to Yeovil to watch the final in the Hobbit Trilogy. Proof really, that it really should have only been two films. The second was my favourite – we indulged in the luxury of watching it at our nearest imax theatre in Cardiff and it was an amazing experience. I’m glad we didn’t bother with this one though….

it was just so slow. I found it rather boring for the whole of the first half, and it isn’t a short film. Luckily I am a Lord of the Rings fan and I’m interested in other aspects, such as the costumes, the beautiful landscapes of New Zealand, and since my daughter has been involved in film-making, the general cinematography and editing. In my opinion, a good film should draw you in so you don’t notice that sort of thing. To be honest, I came away feeling disappointed and let down by Peter Jackson.

There was no story at all to this film, and rather than dragging out the first half where nothing happened, they may as well have got on with the massive battle, but included smaller stories within it. They tried to introduce some humour with the character of the King of Laketown’s right-hand man, but it fell flat with a confusing script. He was last seen dressed as a woman and stuffing coins down his bra, but we don’t know what happened to him next! There should at least been a humorous death involved.

There was very little dialogue between the dwarves and therefore no characterisation either. We saw them a lot, but at the same time were insignificant. In fact the whole script seemed very sloppy and entirely lacked the sparkle and wit of Lord of the Rings. The scene where Legolas’s father tells him to go and find Strider was positively a roll-your-eyes moment. I mean, really? Come on! I didn’t think Thorin’s gold-induced madness was handled particularly well and his realisation scene was a little amateurish even.

Also, (Ok I’m going to have to put in a bit of a spoiler alert here) I’m sure only 2 of the dwarves died in the book. (It’s been a while since I read it, so I could be wrong) and whilst I liked the new Tauriel, they entirely messed up her character in this film. In The Desolation of Smaug, she’s a fantastic kick-ass elf battling along with the rest of them, but she was placed as a mother figure to look after the children at the beginning of the film and near the end within the space of ten minutes she needs to be rescued twice by male characters, and then is incapable of doing anything other than weep over a dead body until the battle is over, rather than help the struggling Legolas (who, incidentally has been airbrushed to near non-existence). What’s with that? Wasn’t the point of her existence to have the strong female character that was lacking in the book and not just a romantic side-issue to be rescued by heroic men and then be too emotional to do anything?

The ending didn’t wrap things up too well either – I mean what actually happened to the remaining Laketown people? Was the gold even shared out between those who had a claim on it? Where there any elves left? Did they get the white treasure? I am really hoping that the extended edition dvd is a much better version. It was only the acting of Martin Freeman, Richard Armitage and Ian McKellen that saved this film.

By the way, Happy New Year!

The practicalities of wood-fired heating & owning a Rayburn