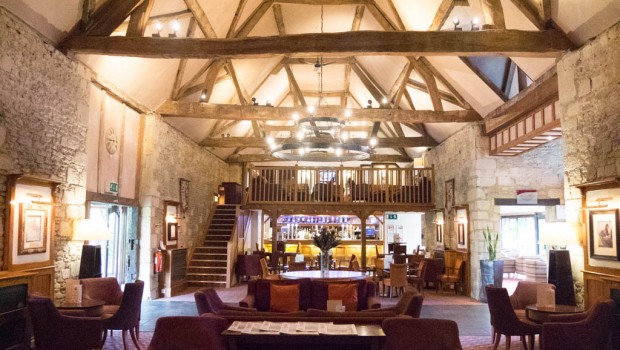 I’ve come to the conclusion that I have too much stuff (“At last!” my Mum will be saying!) so when Chris asked what I wanted for Christmas and birthday, I suggested a day out somewhere instead of a present. He went a step further and suggested a break in a nice hotel. “Sounds lovely,” I said. “I’d like to go back to Oxford.” This particular hotel was ideal because I like old buildings, and the main entrance and lounge bit is medieval. I also needed somewhere to park (you’d be surprised how many in the city centre don’t have parking), and a swimming pool. This one is about three miles from Oxford, but it’s also on the river with the Thames Path running along-side (albeit the other side, so you need to back track a bit to the bridge) so you can walk in if you wish…. 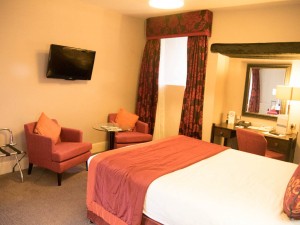 I arrived to find I probably had the best room in the whole hotel (number two). It was in the old bit, and I had patio doors leading outside to an expanse of lawn leading to the river. Other rooms had balconies, which would’ve had a better view (due to the lie of the land, I couldn’t actually see the river); and other rooms had patio doors, with their space sectioned off from their neighbour’s by a screen; but my little out-door bit was the only one that was private. It was a shame the weather wasn’t better because I never actually got to sit out there. When I got back from Oxford at five in the afternoon one day, it began hailing! I did drag over the comfy chair to sit in front of the doors though so I could have some natural daylight for my writing.

The room wasn’t massive, and it had an awkward and dark layout (I really had to up the exposure 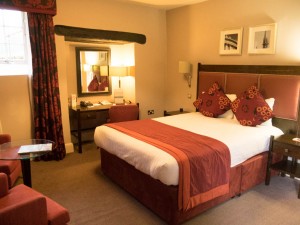 on these photos) with the outside doors in a nook at the side, rather than being in front of the bed, which was a shame, but it was tastefully decorated, included a desk, two chairs and mini table; a large wardrobe and modern bathroom. I also had the upgrade which included a tray of drinks and a very nice bar of Divine chocolate. The first thing I noticed when I walked in the room was the smart decor and it wasn’t for a little while that I 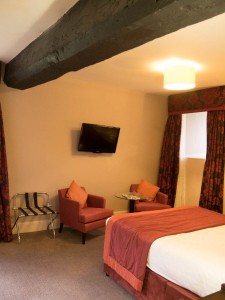 saw the humungous great beam going across the ceiling! The stone windows and another beam over the dressing table area were the signs that I was in the medieval part of the building. It was a shame the interior designers didn’t actually make more of this as the crisp flat plaster and usual built-in wardrobe and tea-making area made it feel like I was in an ordinary modern room. Perhaps that’s what the majority of guests prefer though.

The bed was very comfortable and I would have got a beautiful night’s sleep had it not been for the twenty stone person in the room above me practicing hip-hop at 12:30 at night and then again at six in the morning. Alright, I’m sure it was an ordinary weight person simply getting in and out of bed, but my goodness, there needs to be more sound-proofing up there. I could hear every footstep and the details of every toilet trip. Not pleasant. Considering what they’ve already got away with for a grade two listed building, I’m sure they can manage some thicker sound-proofing underlay beneath the carpet upstairs. 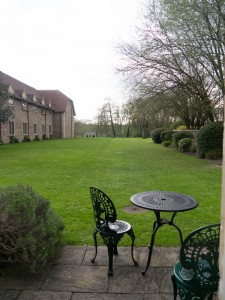 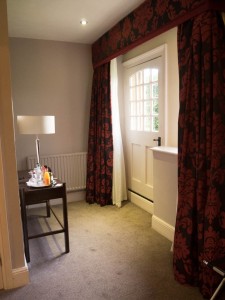 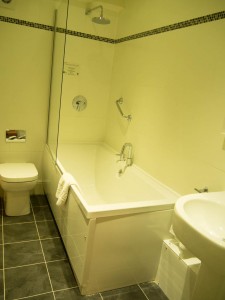 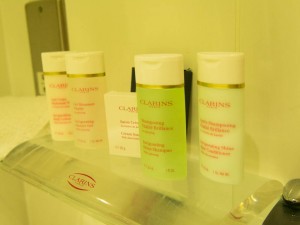 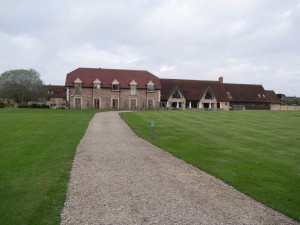 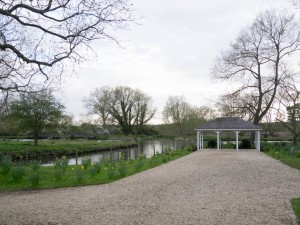 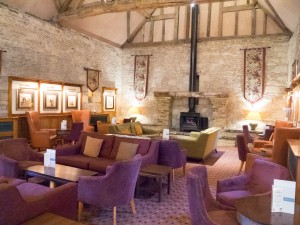 My other gripe is the cleanliness. For the price you’re paying, you don’t expect built-up scum in the corners of the bathroom, nor an old tea bag 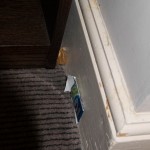 from a previous visitor and its wrapper left on the floor next to the tea-making shelf. I even moved the bin out of the way so the cleaners would spot it the next day; but although the bin was emptied and moved back, the teabag remained.

The staff were friendly and helpful, and I never had to wait long for attention at reception. The breakfast in the conservatory was lovely and several choices were given. From ham and cheese, to porridge and posh yogurts, to pastries, cereal and a gadget to freshly squeeze your own orange juice; you couldn’t ask for more cold options. The cooked breakfast had sausages, bacon, tomato, hash browns and fried egg. I’m surprised mushrooms, fried bread and baked 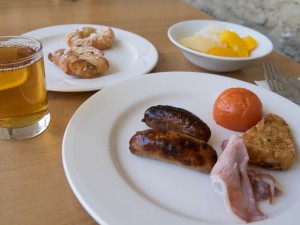 beans weren’t there to choose from, but you could ask for some extras, including omelettes to be made for you. I didn’t notice this the first day as there wasn’t a menu on the table I sat at. The second day though, I was actually shown to a table and offered tea or coffee. I do like the buffet style breakfast – you can fill up on as much as you like to keep you going for the day’s sight-seeing ahead!

I used the swimming pool twice, and it was very pleasant and felt like a proper spa area with a large towel given to you so you don’t have to take your own. There are spa treatments available, but that’s not really my thing, so can’t review any of that. The water in the pool is a lovely warm temperature, and it’s big enough for decent lengths. Be careful as you get in as the steps are slippery. On my first swim I didn’t see the warning sign until after I slipped. The second time I was prepared and cautious, but still slipped! You’re in the water already by then, so it’s not really a problem. The decoration was the typical ancient Greek style, though the cheapy plastic chairs at the side really need to be changed for more upmarket wooden ones.

I like the hotel’s environmental awareness. The bins in the rooms have compartments for recyclable and non-recyclable waste. The signs in the bathroom show how to indicate whether or not you’d like your towels changed and they have joined the Green business tourism scheme. 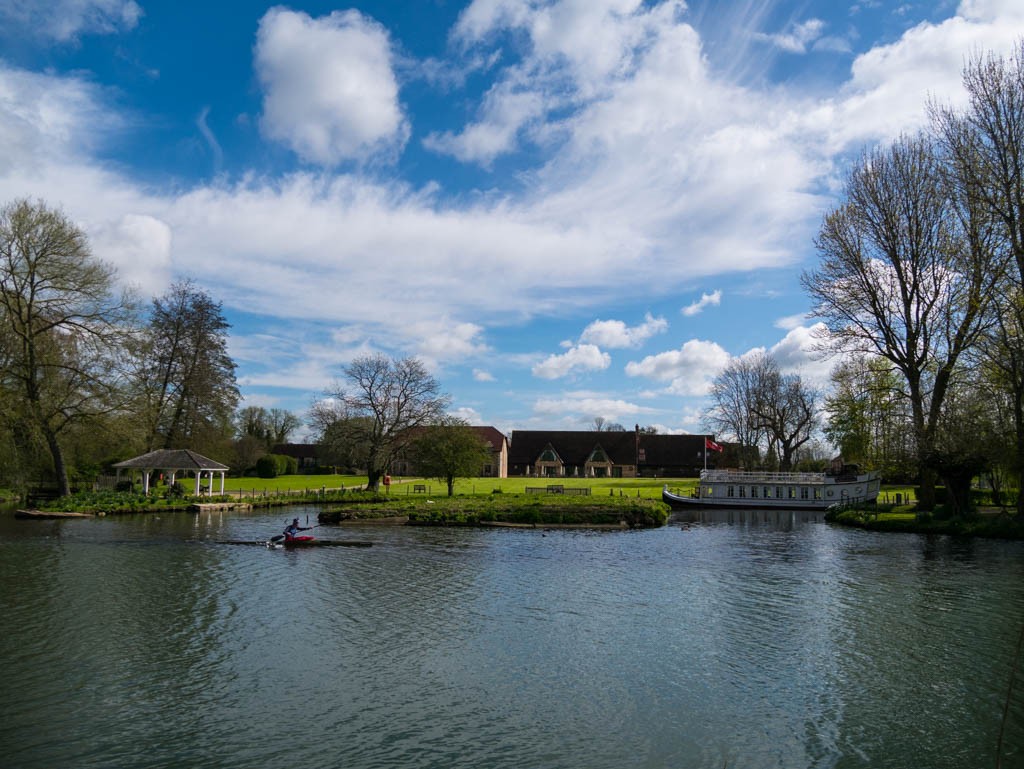 Here’s a little tip: If you want to get to the Thames Path into Oxford, unfortunately you can’t walk along the river to get to the bridge, but you don’t have to walk right the way back up to the main road either. If you’re standing outside and facing the main entrance, follow the car park round to the left and cross the field to where there’s a gate to Church Road. It’s less than a five minute walk to the King’s Arms (where you can have a fairly cheap lunch or evening meal) where the bridge across is at the lock. The hotel can apparently arrange cycle hire, which would be a lovely route to cycle into Oxford too (and much quicker than walking) – if I stay there again I’d try that. The bus I got back from Oxford was the T2 and it cost £2, but took forty minutes (including the short walk from the bus stop to the hotel) because it stopped at every bus stop there is in-between and they seemed to be about twenty metres apart from each other.
I’d definitely stay at the Oxford Thames Four Pillars Hotel again if I had the chance. If you’d like to book this hotel, there are often good deals at Booking.com.

Things you should be doing to get ready for Glastonbury Festival