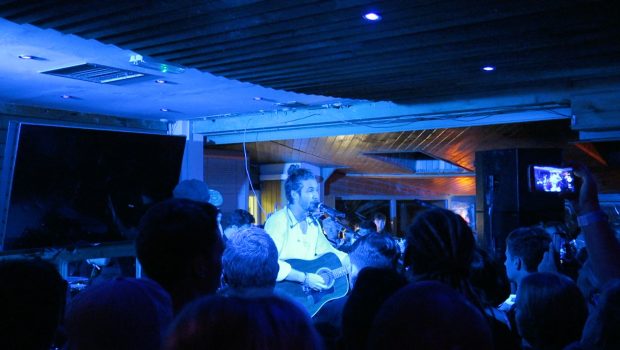 The campervan couldn’t get into the main car park at Perranporth by about three inches, so we parked on the cliff-top, which gave us a beautiful view of the bay and sun beginning to set into the ocean. It isn’t often bands we like venture into the South-West and we were gutted when Jeremy Loops tickets for Bristol sold out before we had chance to buy some; however it was the perfect excuse to go to Cornwall when we saw he was playing there too. We’d never been to The Watering Hole before – it’s a cafe/restaurant/gig venue literally in the middle of the beach. It must’ve been a right pain in the bum to get all the band gear over there! The tickets said the doors opened at nine, so we got there about ten minutes early, sorted out our wrist-bands and bought a drink to sit outside with and watch the sun sink into the water…. 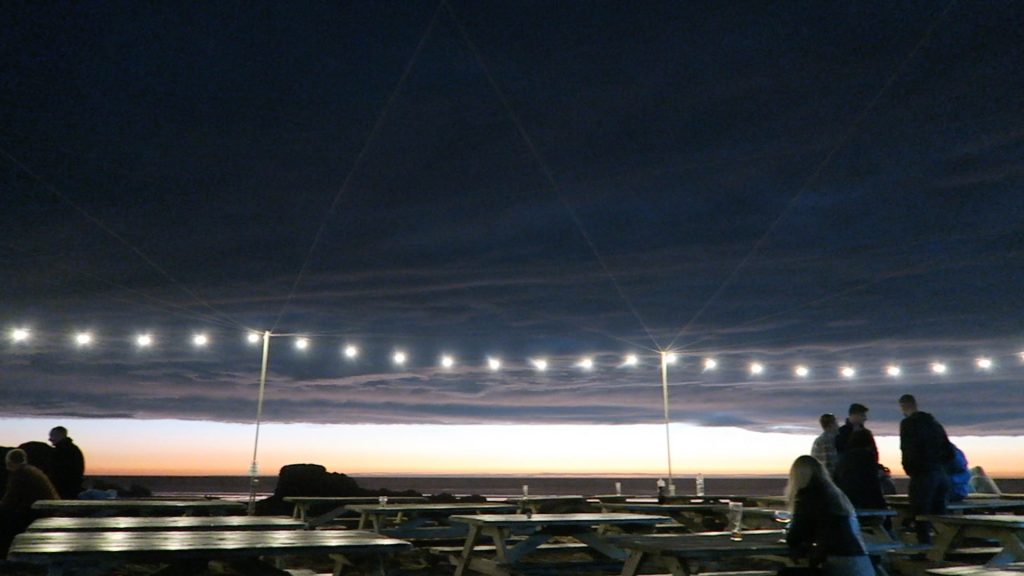 I wasn’t sure quite how it was going to work – I could see where the stage area was already set up, but there were loads of people still eating their dinner all around. I kept looking over my shoulder for signs of Jeremy Loops appearing, but nothing for ages, and then we suddenly noticed it was completely cleared of people inside and there was now a massive queue of people leading right down the beach. It was so annoying – we were actually for once in our life early to something, and then we ended up miles back in the queue.

After standing there freezing to death for another twenty minutes, they finally let us in, and although we weren’t right at the front, we weren’t too far away. Then we stood, and we stood, and we stood for a bit longer. Chris and I both suffer with bad backs, so this was not a good start to the gig for us. Finally, at ten to eleven, I heard the harmonica and Jeremy appeared on the stage area. We weren’t the only ones getting impatient. I felt they just left us waiting a little too long – people were groaning ‘at last’ rather than cheering straight away and it did spoil it a little. It was timed perfectly to end at midnight, so they could’ve just put the start time on the ticket and then all would’ve been fine and dandy. 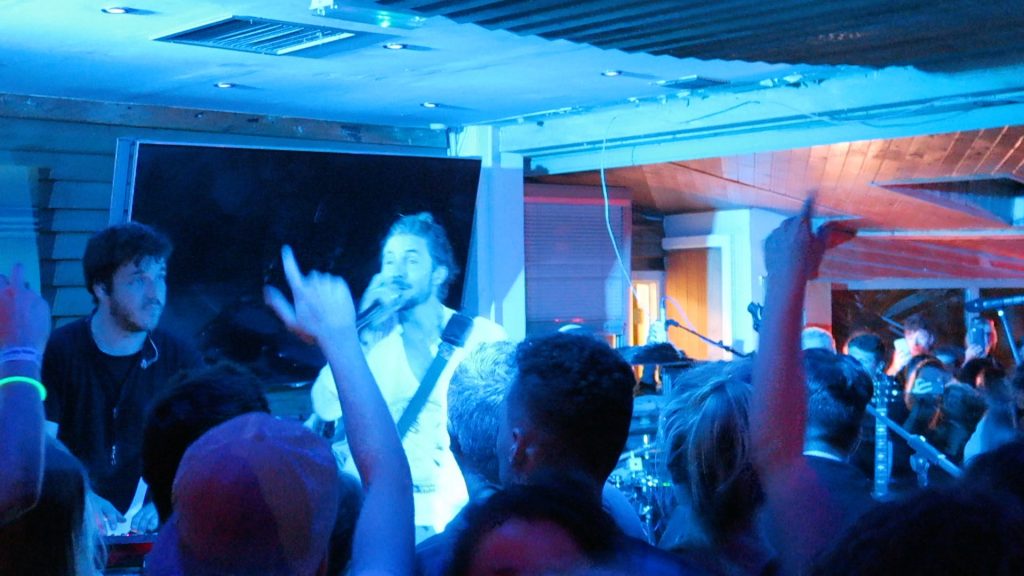 Ok, one more moan before I get onto the good stuff, and there is nothing anyone could’ve done about this, but just as Jeremy came on stage, three people left the bar and pushed their way in front of us. I was already struggling with being able to see before this happened, but then they continued to pull the rest of their group in next to them, until Chris and I were shoved way back. The place was packed full and we had no way of knowing if we’d get a better spot the other side, so we decided to stay put. In the end I could only see any member of the band about half the time, which I was really annoyed about. I got my own back slightly by jumping enthusiastically when the ring-leader of the group had just got himself a pint 😉

Ok, so we couldn’t be annoyed with the band for being late on for more than a minute, because straight away Jeremy was getting us all to join in his first song and any irritation was completely forgotten about. Literally everyone in the room was singing. And I’m pretty sure I knew all the songs – if I remember rightly there weren’t any new ones so this was what was going on the whole time, so you can probably imagine what the atmosphere was like. Jeremy and the band seemed to be buzzing off the audience, so we could see they were having a good time and in turn it made it even better for us with that energy bouncing between us. Have you seen their concert schedule? I honestly don’t know how they do it! I was worried that by the time they got to Cornwall they’d be exhausted, but if they were, they didn’t let it show!

There is nothing worse than watching a singer or band who never talks to their audience. Jeremy can not be accused of that! It was brilliant listening to the little bits in-between songs and in-particular how he used to work in Cornwall back in his student days. When he wrapped a Cornish flag around him like a cape, the crowd understandably went a bit mad! He also came out at the end to talk to everyone who wanted to say hello, posed for selfies and signed records and pregnancy bumps.

We found him originally through watching Ben Brown’s vlogs on You Tube and I’ve realised I’ve got this far in my Jeremy Loops concert review and I haven’t really explained his music. Well, it probably comes under the genre of electro-folk or gypsy-punk. The best thing is probably to look them up on You Tube and then buy their album! It’s toe-tapping at least and jump-up-and-down at most, if that helps!

I haven’t been to many small gigs like this one, but I’m definitely going to seek out more. Usually my live music experiences take place at the Bristol O2 or near the back of the field at the Pyramid Stage or at the front of the Avalon Cafe tent at Glastonbury Festival, but none match the energy and exhilaration felt at the Watering Hole in Perranporth that night. It was by far the best concert I’ve ever been to and I really hope I get to see him again. Please can everyone reading this tweet @EmilyEavis to get him to Glastonbury Festival next year. Don’t you think he’d be perfect for the Avalon Stage? 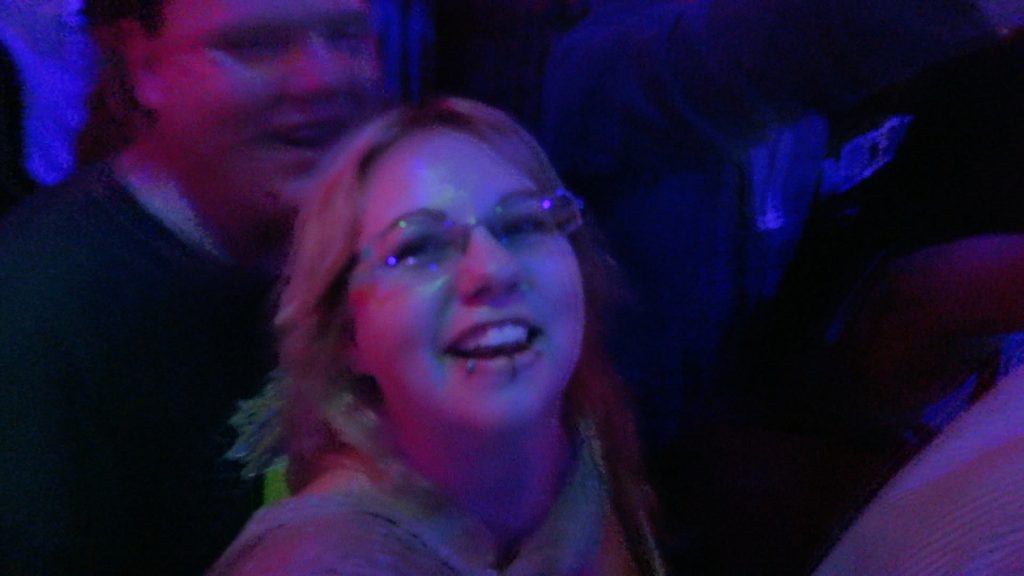 Apologies for the picture quality of these photos – they’re all stills taken from videoing. (A You Tube video of the whole trip to Cornwall is coming soon to my channel!)

Have you been to any good concerts recently? Let me know too if you’ve got any music recommendations for me in a similar style. Thank you! If you like Jeremy Loops, then mine are: 3 Daft Monkeys, Tankus the Henge and Tell Tale Tusk.

3 days in Oxford – Day 1. The story of the photographs