How to host an afternoon tea party 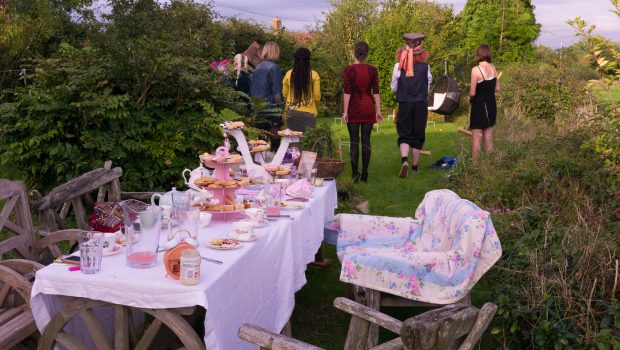 Yes I know it’s not exactly the weather for this in the garden any more, but it can still be done inside! My daughter didn’t want to go out on the piss for her eighteenth birthday last month – partly because she’s the first of her friends to turn legal in pubs, so it wouldn’t be much fun getting drunk on her own – and partly because that’s not really her sort of thing anyway. For now at least! So it was her idea to have afternoon tea in the garden with a nod to an Alice in Wonderland theme…. 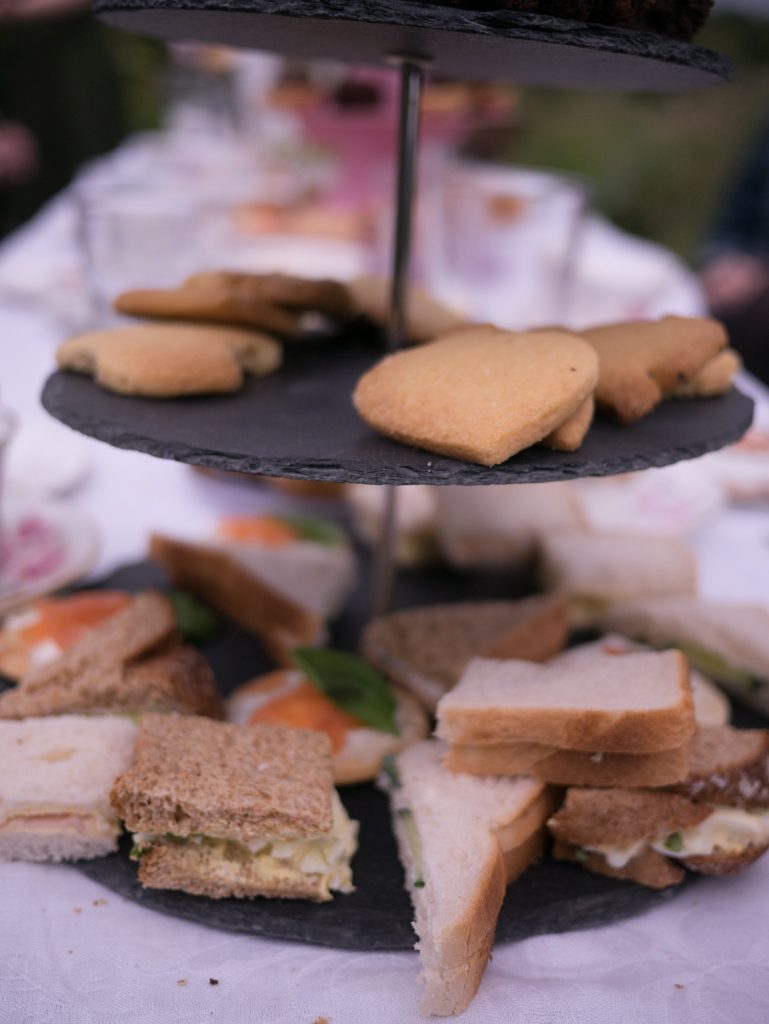 The most important thing for her was that the table looked pretty. We found a huge white table cloth at a boot fair for 50p, which was just big enough to cover two tables pushed together. All the saucers and the pretty teapot also came from the boot fair, whilst the tea cups were bought from ebay. The tiered slate cake stand was a present from Chris at Christmas last year. I love slate and it matches our table mats. 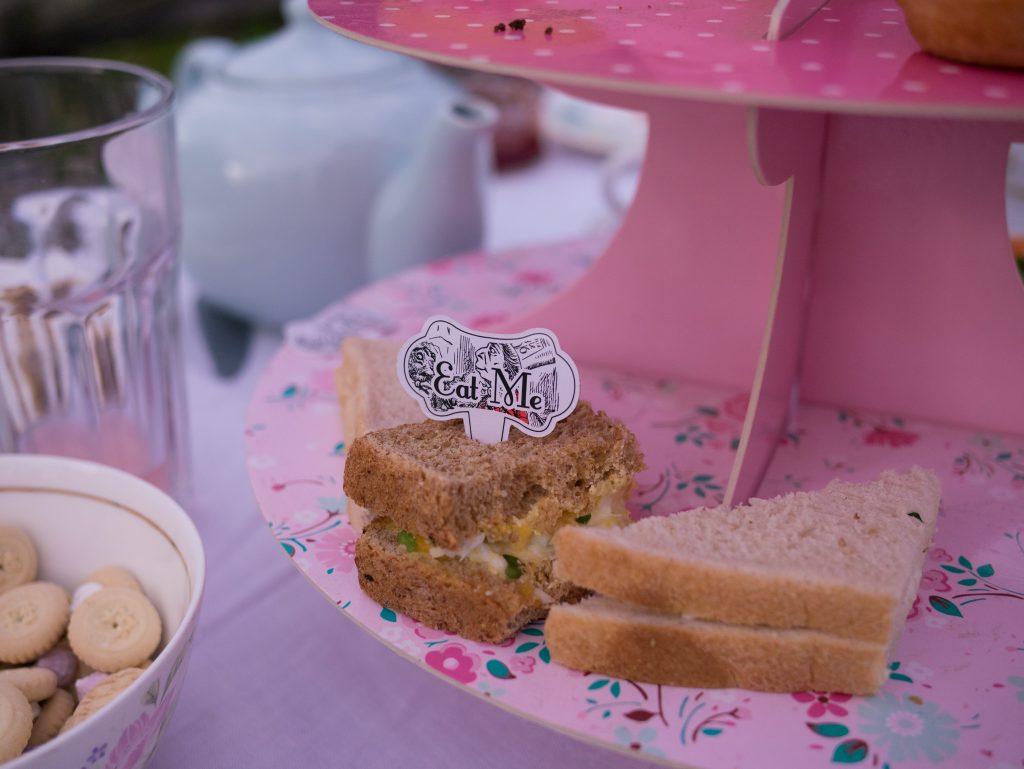 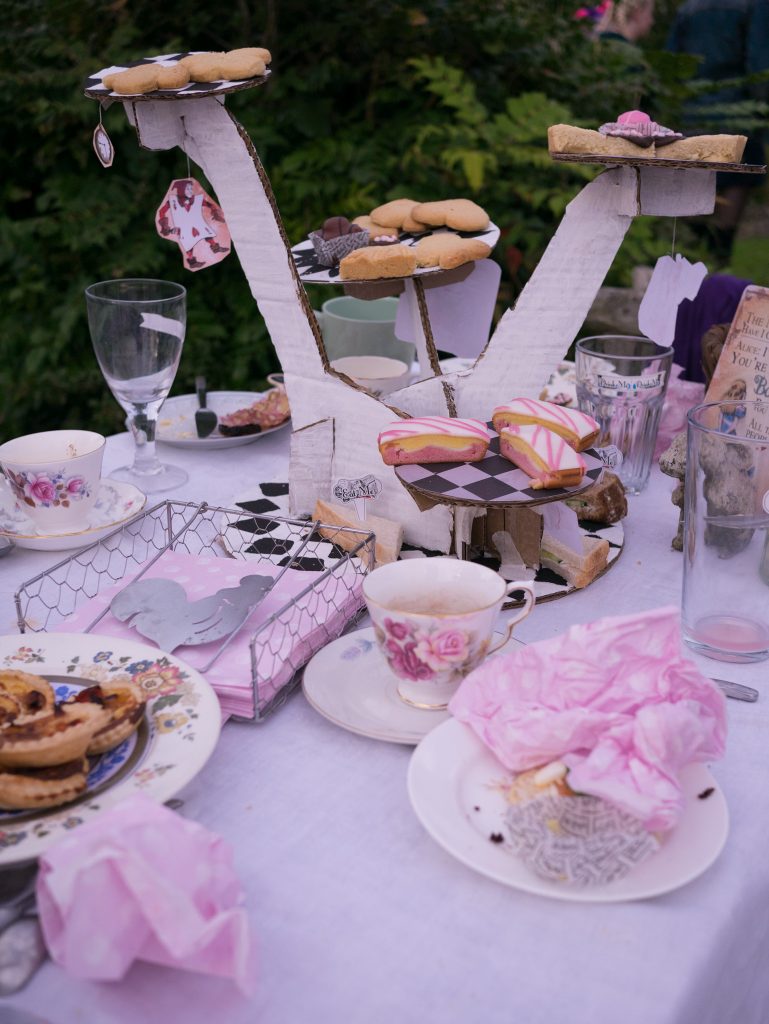 And the large cardboard Alice in Wonderland cake stand, Jude made and decorated herself, and I’m very impressed with it. When she said she wanted to 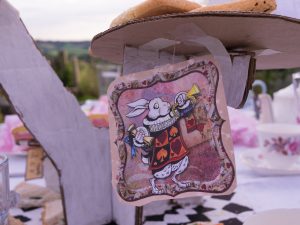 make her own one, I inwardly groaned because these things never turn out as good as you hope, but this was much better than I hoped actually. I’ll admit, I wouldn’t overload a couple of the round stand bits, but it worked really well on the day with several cakes on the top tiers and sandwiches and savoury tarts on the lower ones. Two of the tiers have chequer board paper glued on from the DCWV The Immortal Love paper stack, while she painted the others. The wet paint did start to make the cardboard come apart slightly, so we just ran pva glue all round the edges, which seemed to do the trick. She also used dental floss to hang Alice in Wonderland pictures underneath the tiers. These were from My Paper Stash Library. They swung in the breeze and also served as swishing away flies! The Drink Me stickers and Eat Me labels came from a pack from Primark. 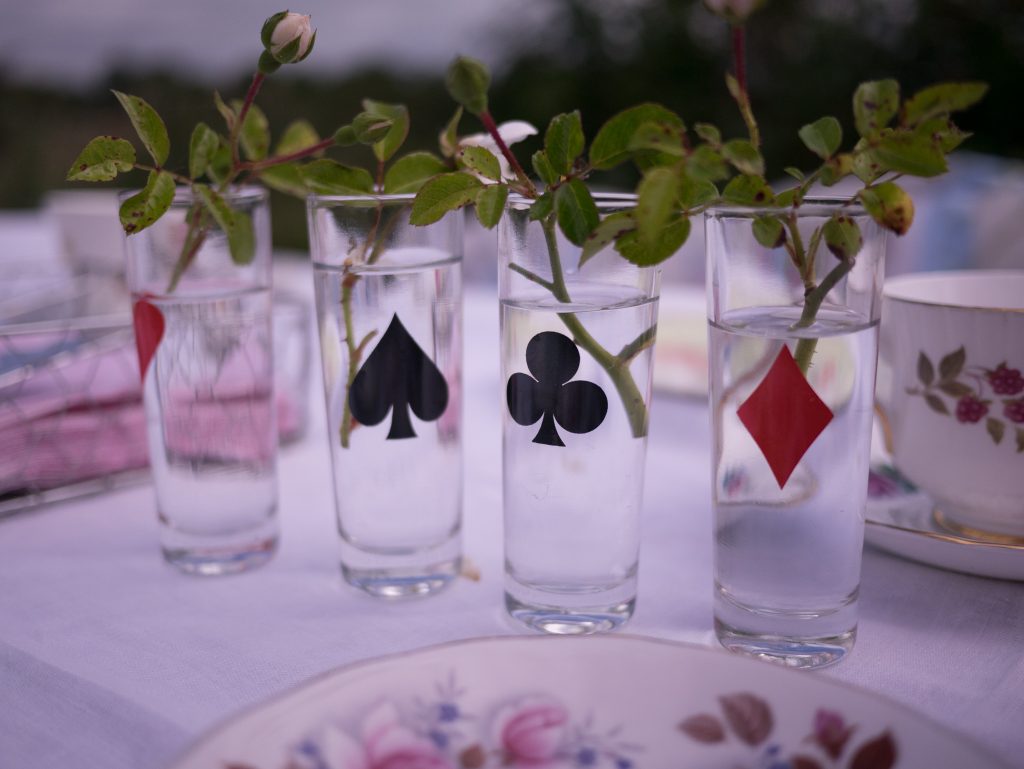 These heart, diamond, spade and club shot glasses were also found at the boot fair and we used them as mini vases with white roses from our garden. Ok, that’s the decoration, now for the actual food! 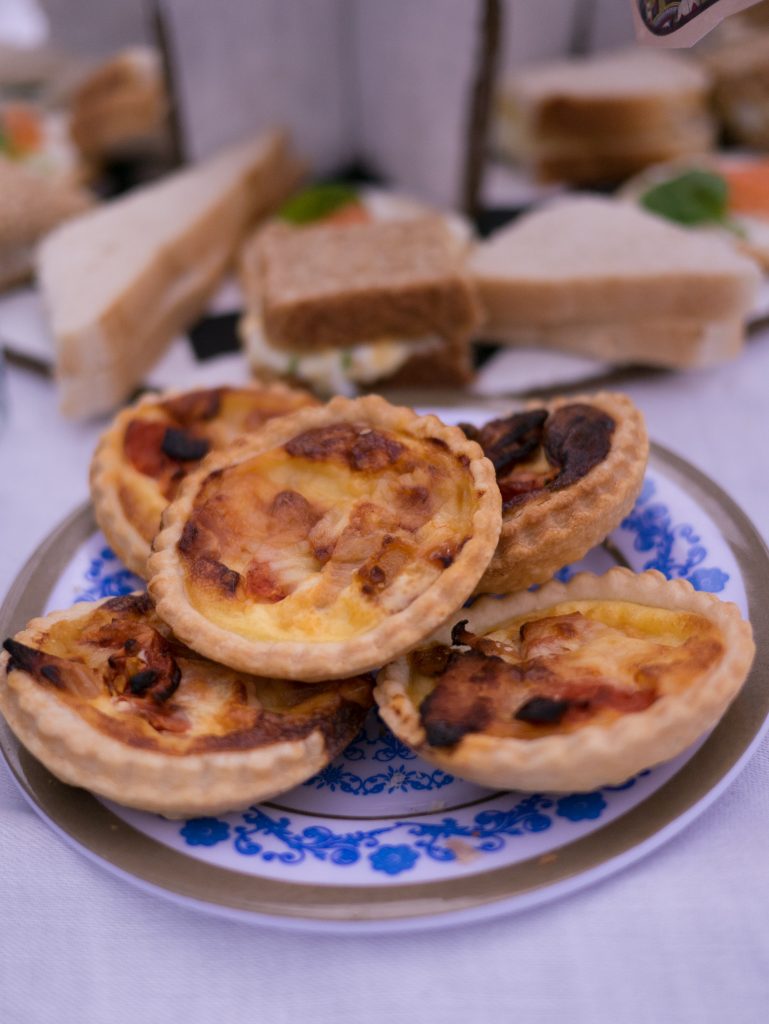 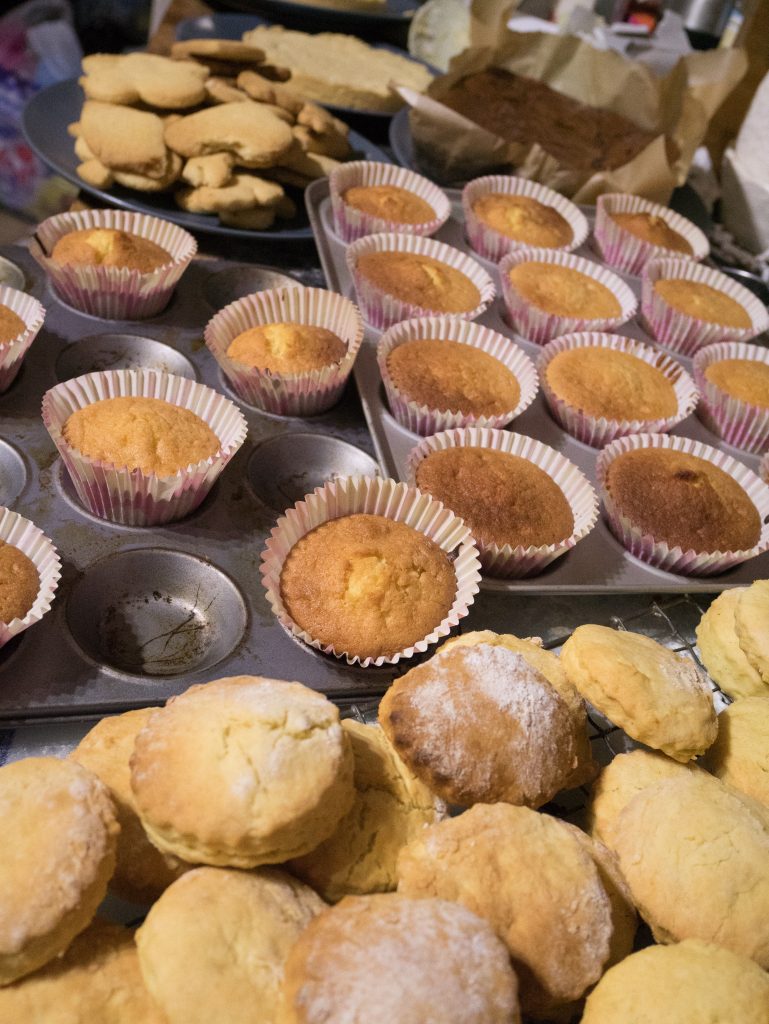 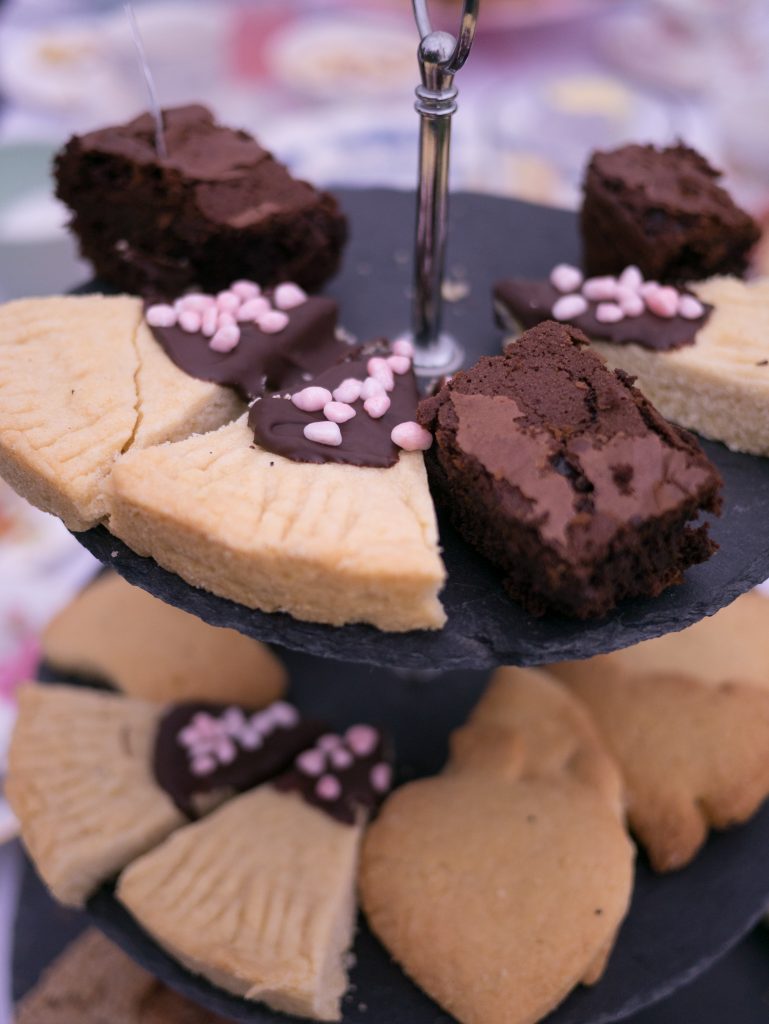 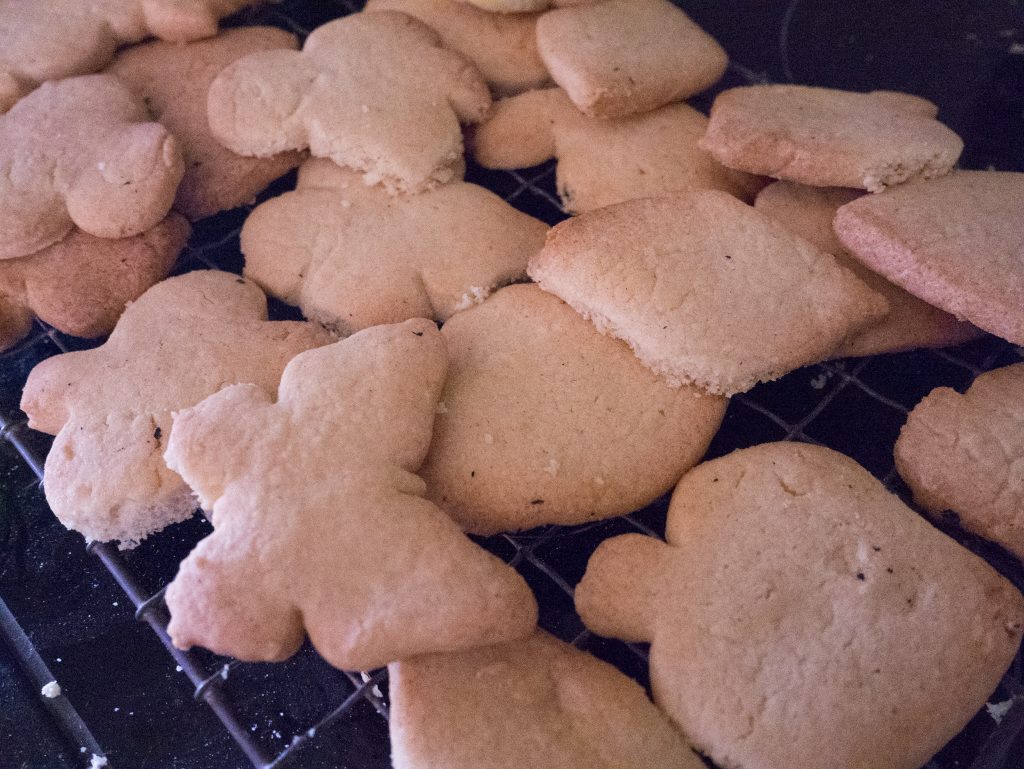 We argued over whether they were savoury or sweet, but of course, we also made lots of scones served with butter, whipped cream and different jams. 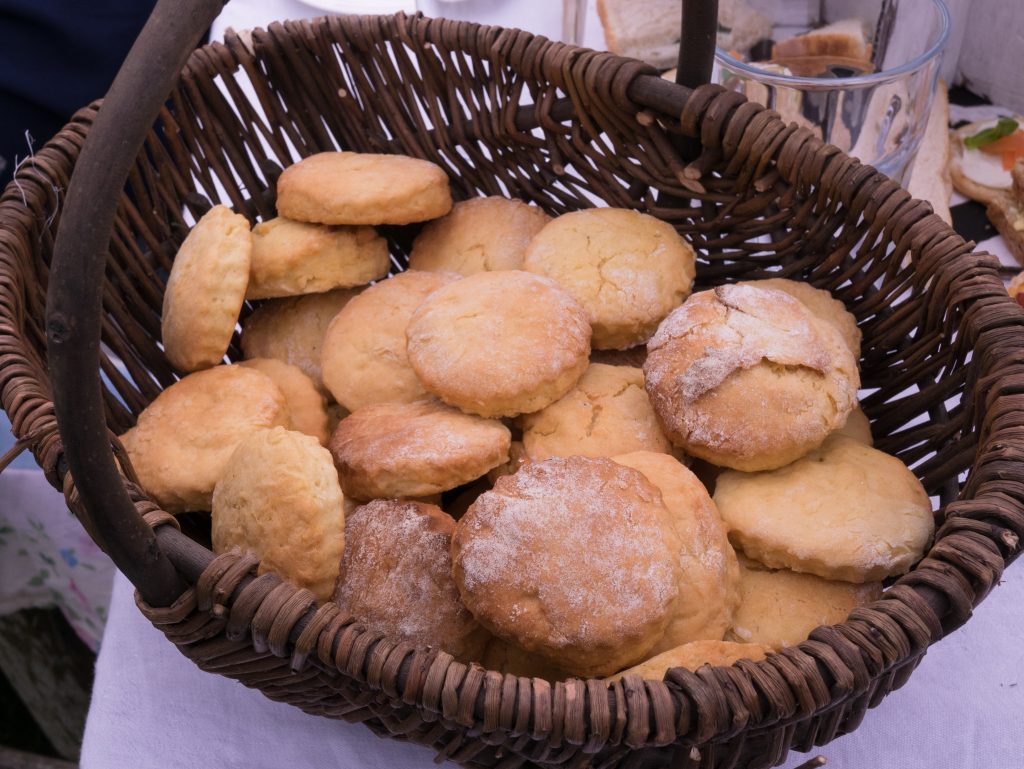 A basket of scones

Also, after the guests had played a game of croquet, I brought out some strawberries and a bowl of melted dark chocolate to dip them in, and this went down really well! 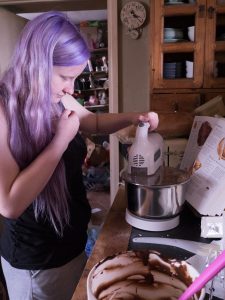 Jude and I were cooking constantly for two days, and then I made the sandwiches at 2am on the day of the party because I couldn’t sleep. Everything I still needed to do and didn’t want to forget about was going round in my head.

Yes, luckily our garden is flat, and just big enough for a small croquet pitch, and what better activity to do after an afternoon tea?! Most of the guests had never played it before, but luckily one knew it well so she could explain the rules to everyone for me! This was also really successful and everyone really got into it.

There are a couple of things I would do differently another time: 1. I’d get everything out on the table before everyone arrived. Trying to carry everything out while people were already sitting round the table was very difficult. It also meant I couldn’t take the photos of it that I wanted to. So it would mean the sandwiches wouldn’t be able to go on the tiered stands as they’d all need covering with cling film as they get stale so quickly. And I’d get an old net curtain to cover all the food and keep the flies off. So all I’d need to bring out would be the butter and cream for the scones.
And 2. I really wish I’d found the time to do the gardening before the party. Teenage girls probably don’t care all that much, but all I had time to do was cut back some of the brambles. I wish I’d properly weeded everywhere and bought some flowers for colour as hardly anything in our garden is in flower any more. 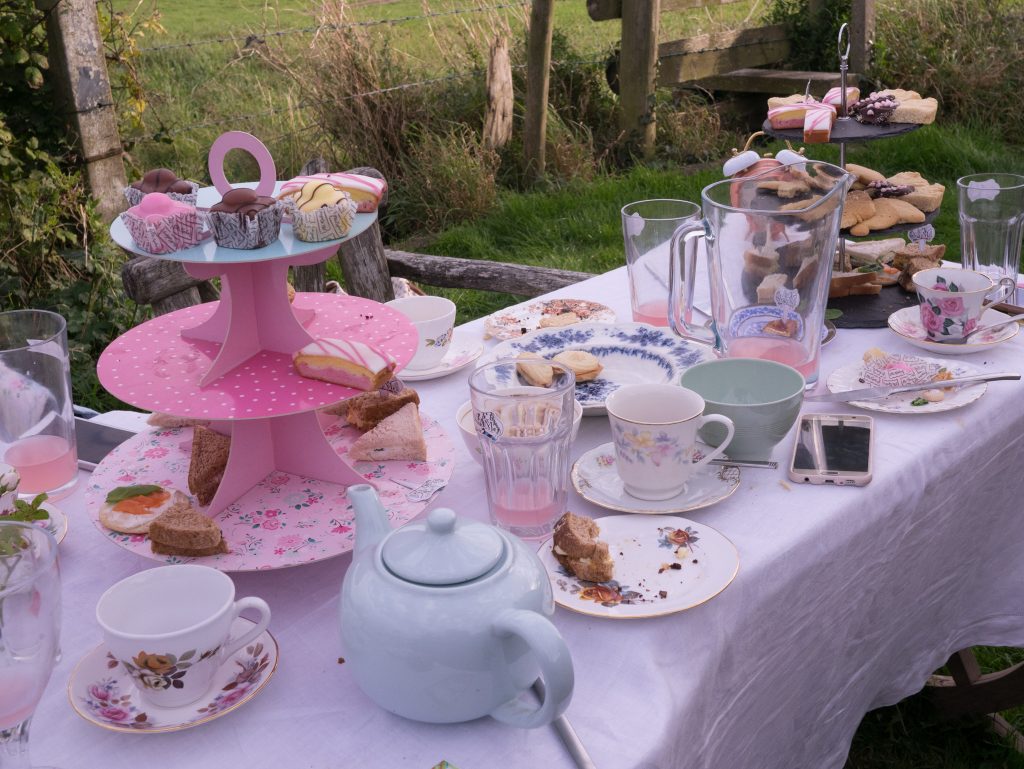 Jude had a lovely time and so I think did everyone else, so the day was a real success. She didn’t want it to end and was very sad when it did. They all sent messages afterwards saying how good the afternoon had been, so I think if you’re looking for an idea for an eighteenth birthday party, then this might just well be it! Let me know in the comments if you’re thinking of having a tea party for any reason!

Weekly Wardrobe – layering for a walk at sunset