Afternoon Tea with Mr Darcy at the Jane Austen Centre in Bath, Somerset 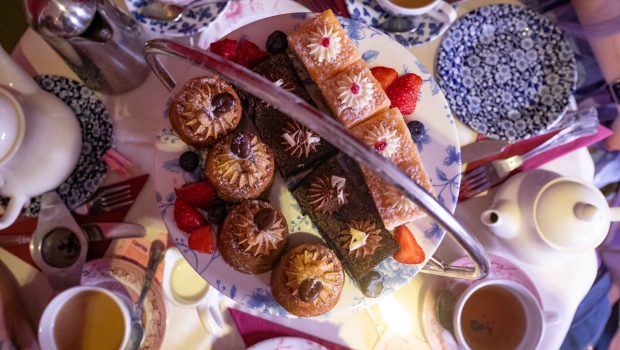 We asked what Jude would like to do for her Twentieth birthday (yes, you did hear me correctly: twentieth birthday) and she asked to go out for afternoon tea. I’ll be honest, when I agreed, I was thinking more like at a National Trust cafe, but Jude had in mind the full afternoon tea experience. Apart from on a cruise, I’ve never done this, (it’s the sort of thing I’ll do when I grow up) so was looking forward to experiencing the proper deal….

Jude was a little particular as to what she had in mind – she wanted pretty cups and saucers, and a fancy-looking location. When looking for somewhere, she even checked what the cutlery looked like! But luckily Bath has a good selection of afternoon tea venues, so in the end we decided that the Jane Austen Centre fitted the bill perfectly. 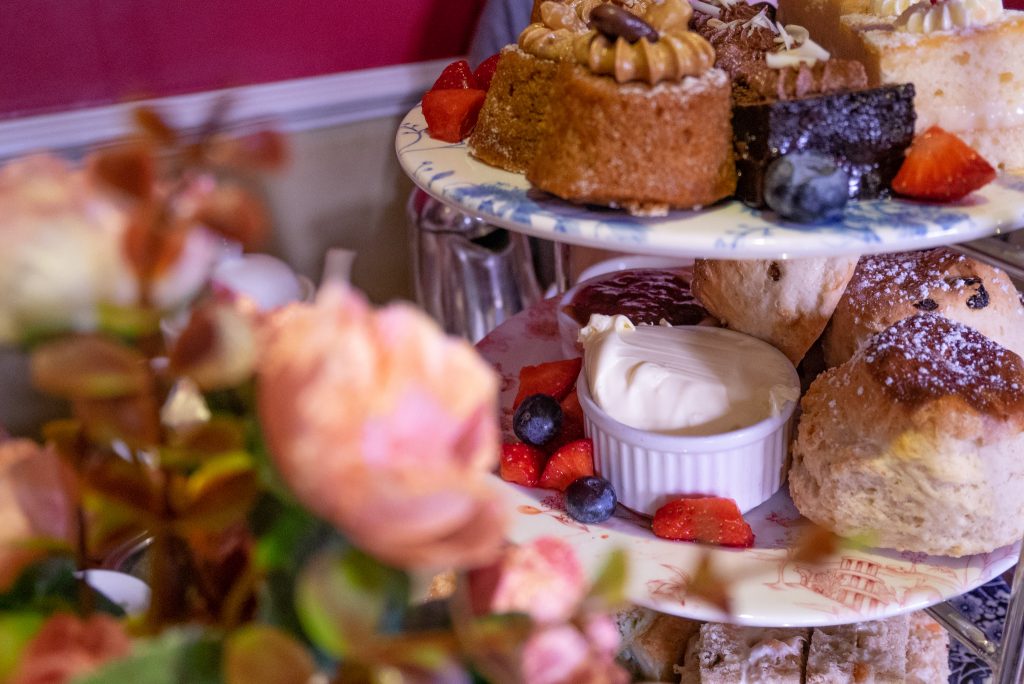 Little did we realise that the Saturday after her birthday was also the date of the Bath Jane Austen Festival. As we gradually noticed more and more people wondering the High Street in late eighteenth century garb, this fact dawned on us and I suddenly thought that there was no flipping way we were going to get a table. It hadn’t occurred to me to book, but it turned out that they don’t accept reservations during the Jane Austen Festival anyway; and when we phoned, they said it was a half an hour wait. Well, that was ok; we made our way up there anyway and checked out the afternoon tea menu in Jolly’s just in case. However, we were lucky and a table for four had just become available on our arrival at about 2:45. Perfect. The fact that a few people already there, and others arriving later were in full-on Regency costume, made it all the more special I thought. I was kicking myself though that I hadn’t worn my Jane Austen style dress (coming to a blog post near you very soon) that I’d worn to Bath back in spring. 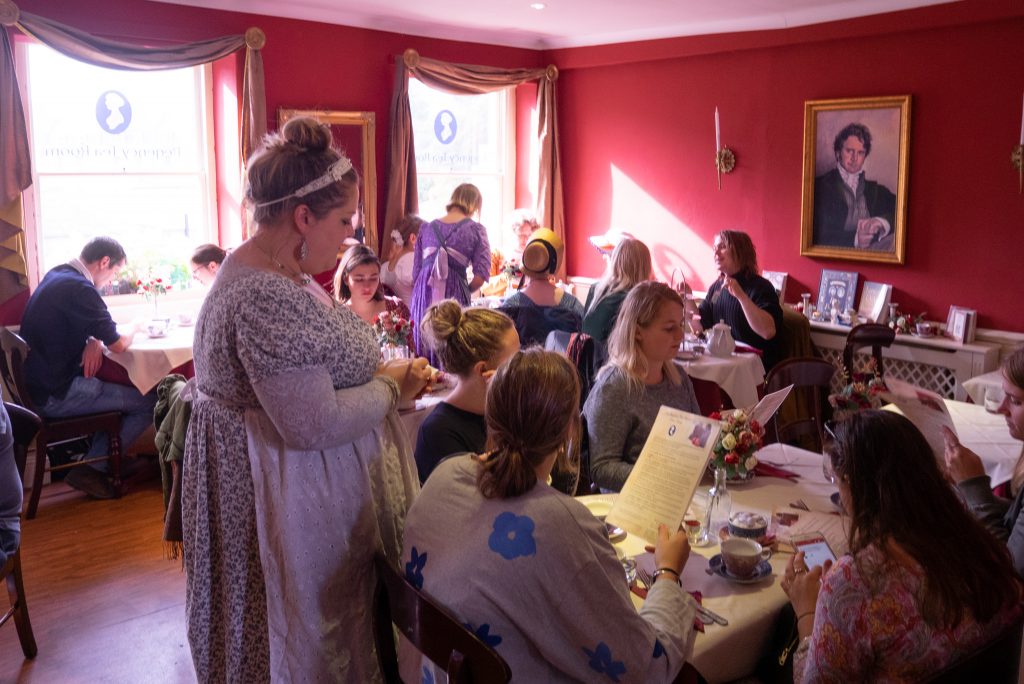 The staff wear Jane Austen era costume, and the menu choices have names such as ‘Lady Catherine’s Proper Cream Tea’ or ‘Mrs Bennet’s Cake of the Day’. This was one of the reasons we picked here actually, as most places offered little or no choices. So if you want, you could just pop in for a cup of tea and a scone. However we went for the full afternoon tea experience and had ‘Tea with Mr Darcy’. This included tea or coffee; 3 finger sandwiches; a scone with jam and clotted cream; and three mini cakes each. Chris is super fussy, so he had the tea, but nothing else, so Rain, Jude and I ate extra! 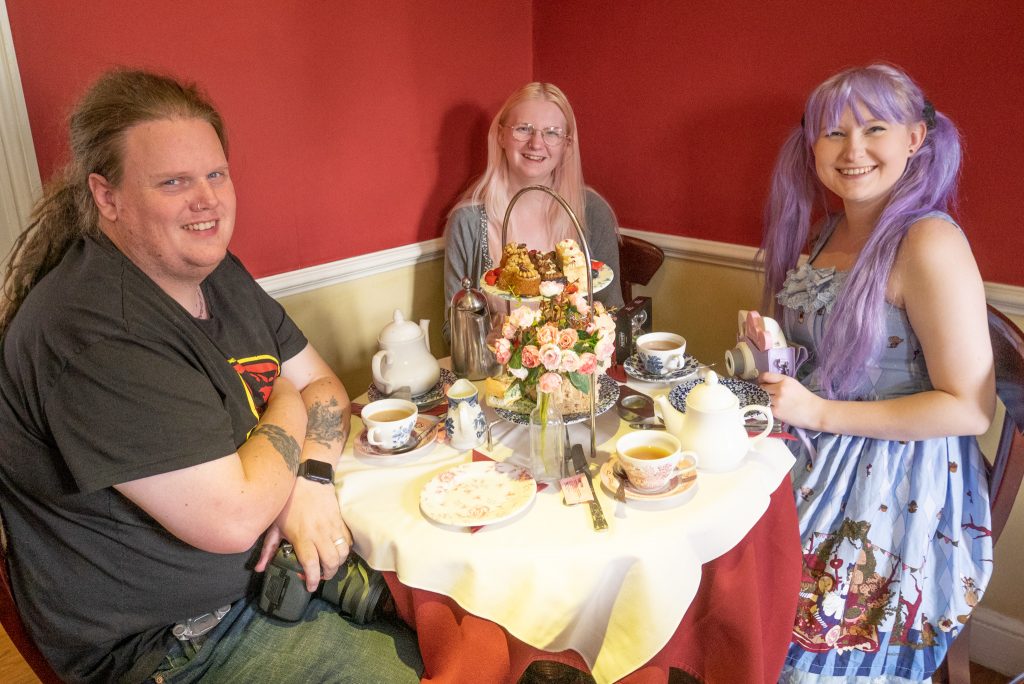 I’d eaten a small breakfast but no lunch, and I was properly hungry. I was worried that the portions weren’t going to be big enough, but were actually just right with Chris’s portion shared between us. So I’d advise having a small lunch first, and maybe going slightly later than we did. 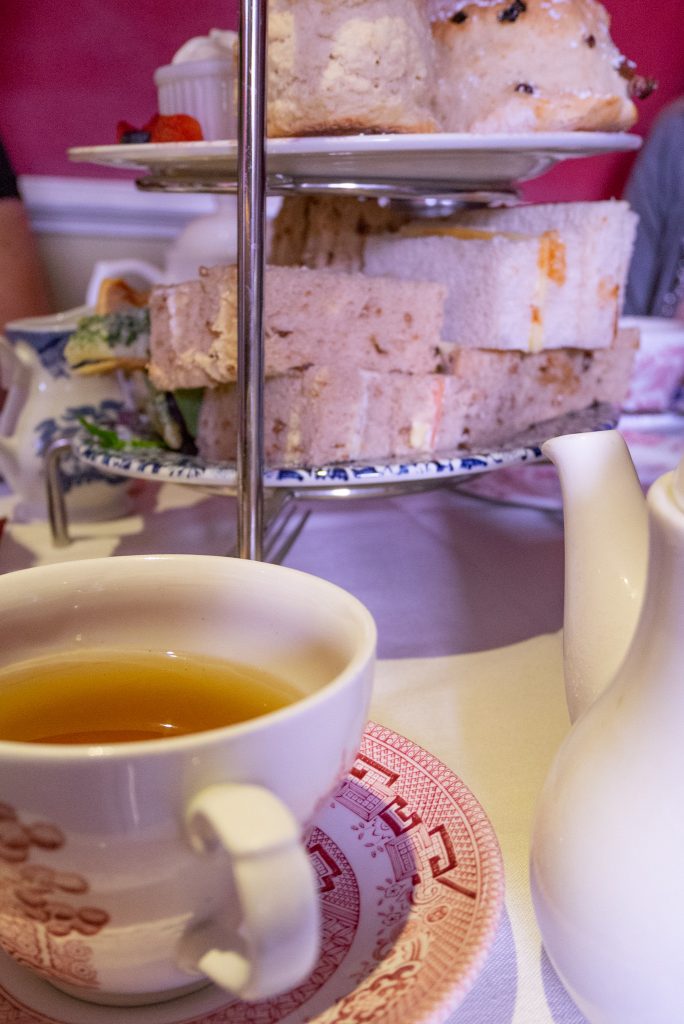 Right, onto the actual review of afternoon tea at the Regency Tea Room in the Jane Austen Centre: I highly recommend it! The tea was of course all loose-leaf tea, and as a non-tea drinker I had the mango black tea, which was very nice. Chris and Jude said the Breakfast tea was good, and Rain enjoyed her cafettiere coffee. The sandwiches were honestly the best tasting I’ve ever had! There was smoked salmon and cream cheese; egg mayonnaise, and cheddar and chutney. There was also a slice of spinach and ricotta quiche each. The scones were fresh and soft and nearly as good as my Aunty Pat’s (and that’s saying something) and the cakes were ok. Actually the cakes were my least favourite of the three courses. In fact, I’m sorry to say that I couldn’t eat the Victoria sponge as it was disgusting – like having dry cake with canderel paste, and no jam. And there’s nothing worse than disappointing cake. The chocolate was ok; the coffee cake was actually the nicest and I don’t like coffee. I’m very relieved I hadn’t gone for the tea and cake option. I was pretty full by then, and the sandwiches and scones were so nice that it didn’t spoil my day! 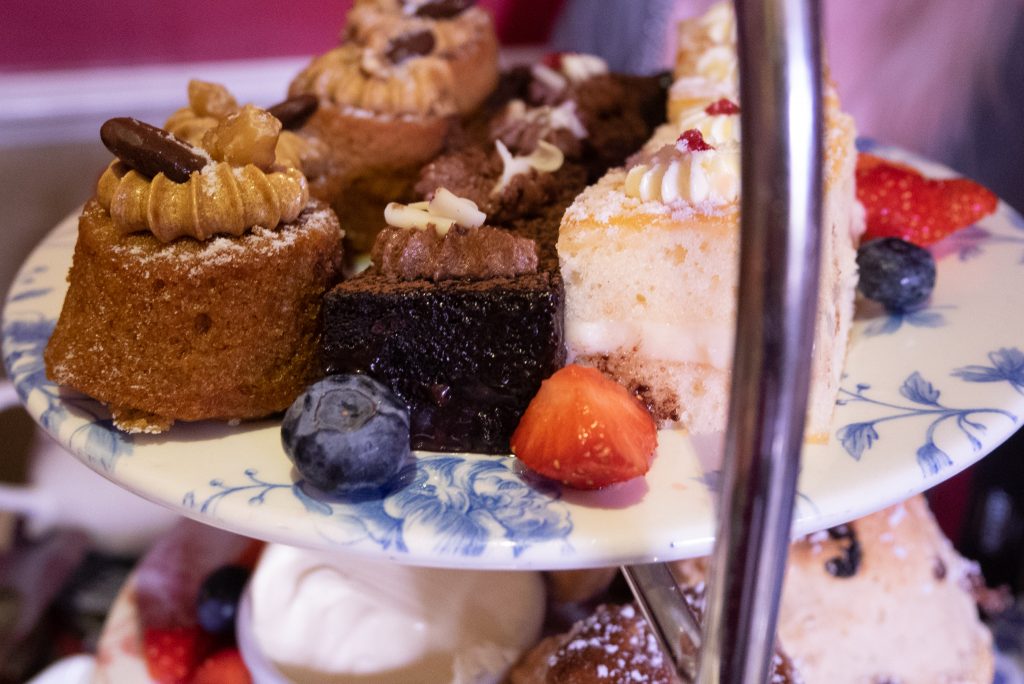 The Jane Austen theming was fantastic and I absolutely loved it. But even without that, it was all the presentation, the table cloths, the pretty mismatched crockery; the vase of flowers; candle burning, and even old-fashioned cutlery in the setting of a Georgian house that made it so wonderful.

You know when everything is perfect it makes the one thing that isn’t stand out even more? Why did we have paper serviettes, not real cloth ones?! 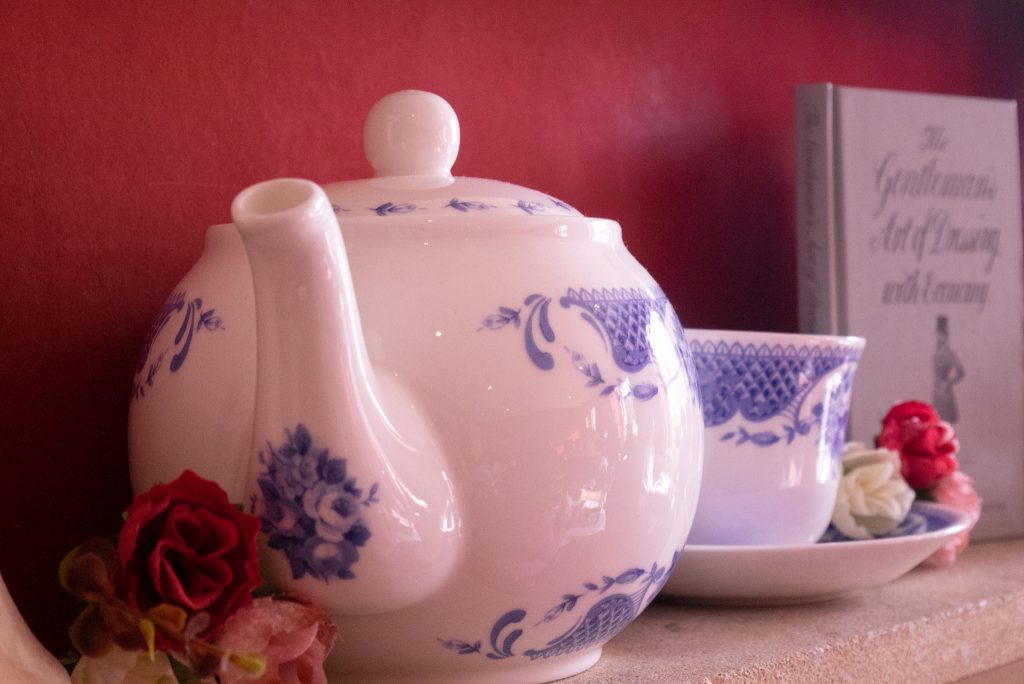 I haven’t talked about cost yet. Like I said earlier; I’d imagined a National Trust cafe when I agreed to this, and when doing the research, I was a little flabbergasted at the cost of proper afternoon teas in Bath. Tea with Mr Darcy was £18 each or £34 for two. And I thought that was quite expensive for what we were getting, but in fact, although I haven’t sampled elsewhere in Bath, I’d be pretty confident in saying this is probably the best value afternoon tea in Bath. 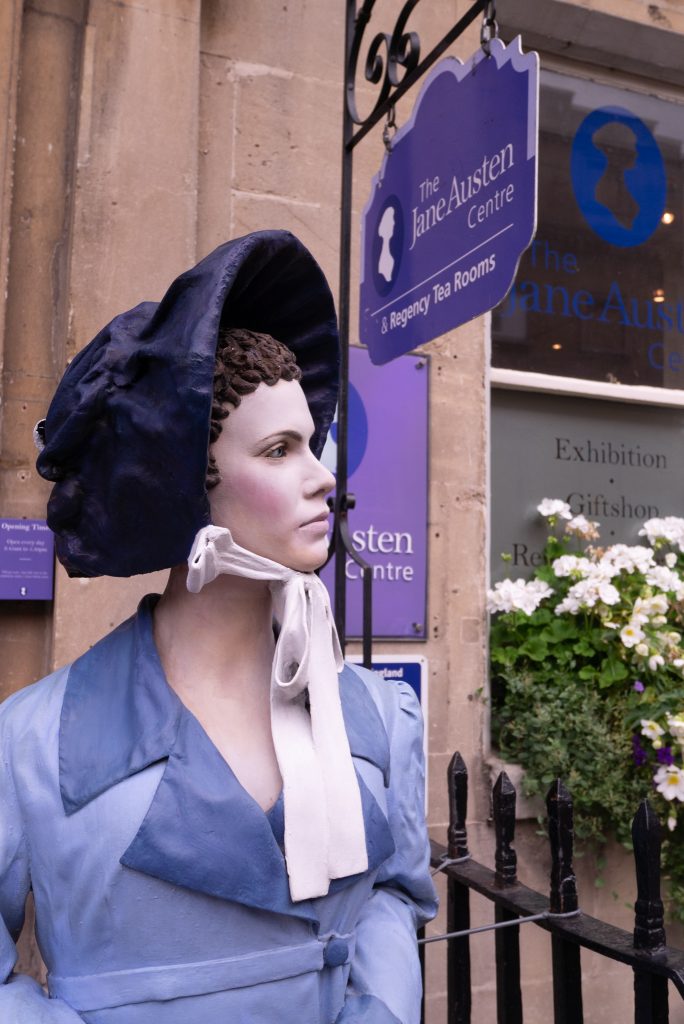 If you’re considering treating yourself or someone else, then my research notes might help you find where to have afternoon tea in Bath:

Bath Priory. £34 each.
Pump Room. £26 each. Not impressed with menu & not the setting we’re after.
Royal Crescent. £37.50 each.
Hands Georgian Tea Rooms 1 Abbey Street. Chose a sandwich from menu, not a selection brought out on tiered tray.
Mad Hatters cafe. No prices online.
Newton Farm shop & cafe. £30 for two.
Bailbrook house hotel. From £22 each, no other info online.
Comins tea. £16 each.Not the setting we’re after.
Great Pultney. £28 each.
Browns Brasserie & Bar. £14.50 each. Not the setting we’re after.
Brigits Bakery. £22 each inside. £38-£58 on a tour bus. Couldn’t find much info of cafe setting.
Jolly’s tearoom. No price online. About £22 each if I’m remembering correctly. Too modern.

In conclusion, we had a lovely day and Jude was happy, so that’s the main thing. For a special treat I would definitely go back to the Regency Tea rooms at the Jane Austen museum for afternoon tea. And dress up next time! 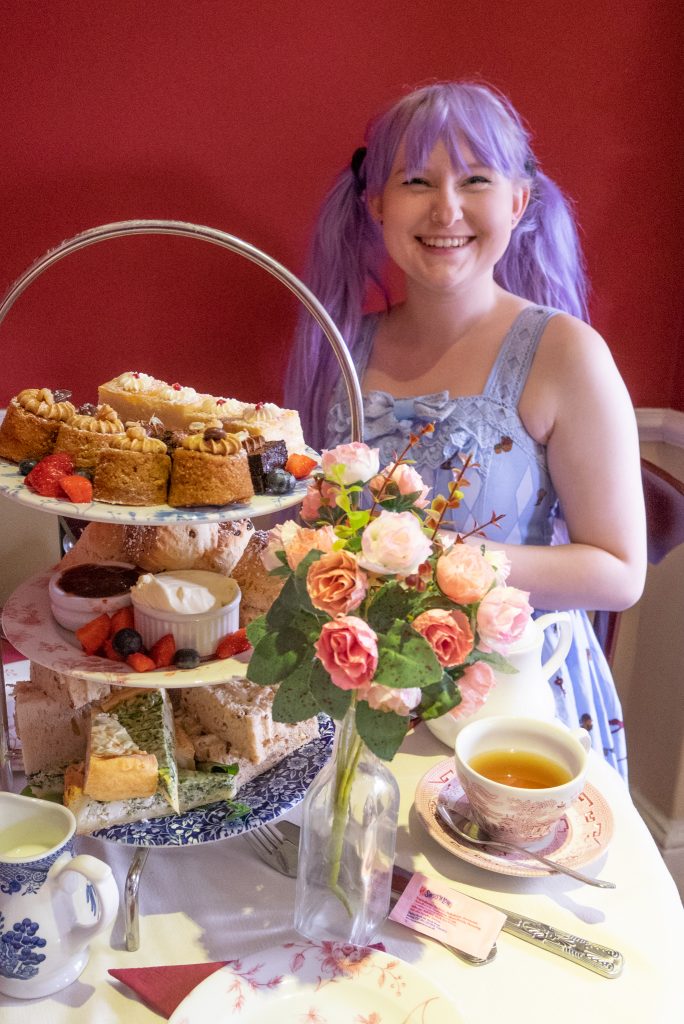 Craft storage solutions for organising and sorting out my crafting stash