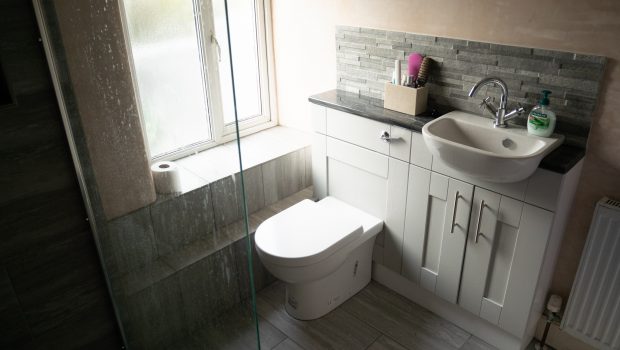 I’ll be honest, I’d hoped to tell you about the whole thing in two parts, however the bathroom is still not finished – we’re a bit stuck on the decoration. In the mean time, I’ll fill you in what happened after stage one!… 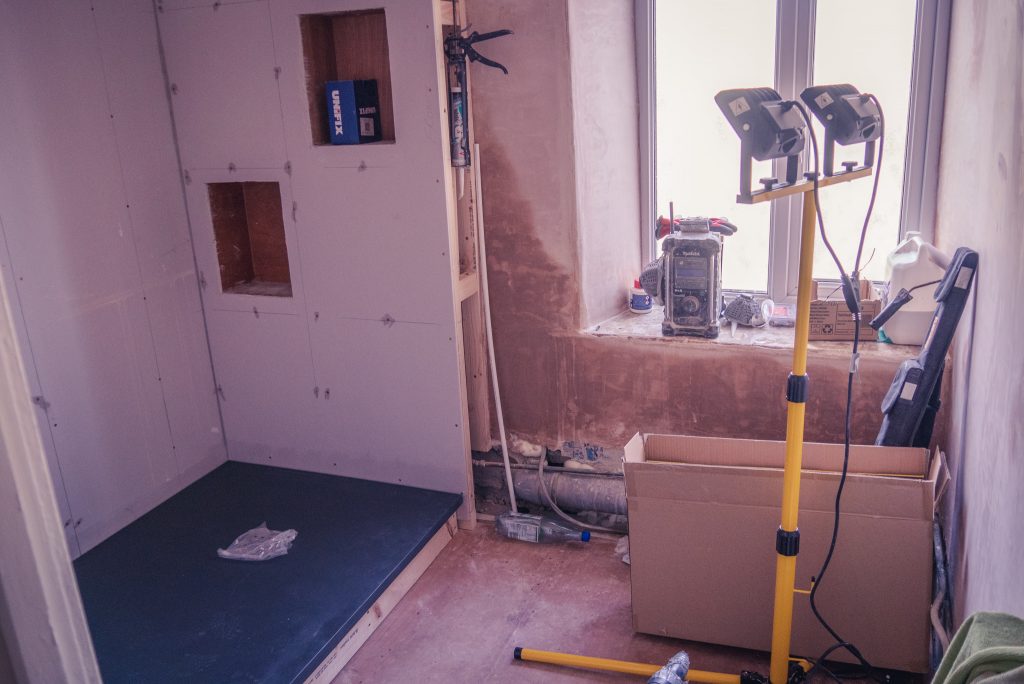 The whole bathroom build went according to plan and to schedule – in fact, if it wasn’t for waiting for the electrician, it would’ve been finished a day and half early. J and R were brilliant; cleared up after themselves every day and went to the extra effort to make a really nice bathroom that they (and us, by acclaim) can be proud of. In fact, I’m going to stop calling them by their initials (which I did to begin with in case it all went wrong), Julian and Richard, and give the company, JEK Plumbing Services, a shout out, because I would definitely recommend him/them, and hope they can do our other bathroom when the time comes.

Now finding a good bathroom or kitchen plumber is a difficult thing, so you may thank me in the comments below! Or in exchange, please recommend a good electrician! (Ideally in the central Somerset area.) 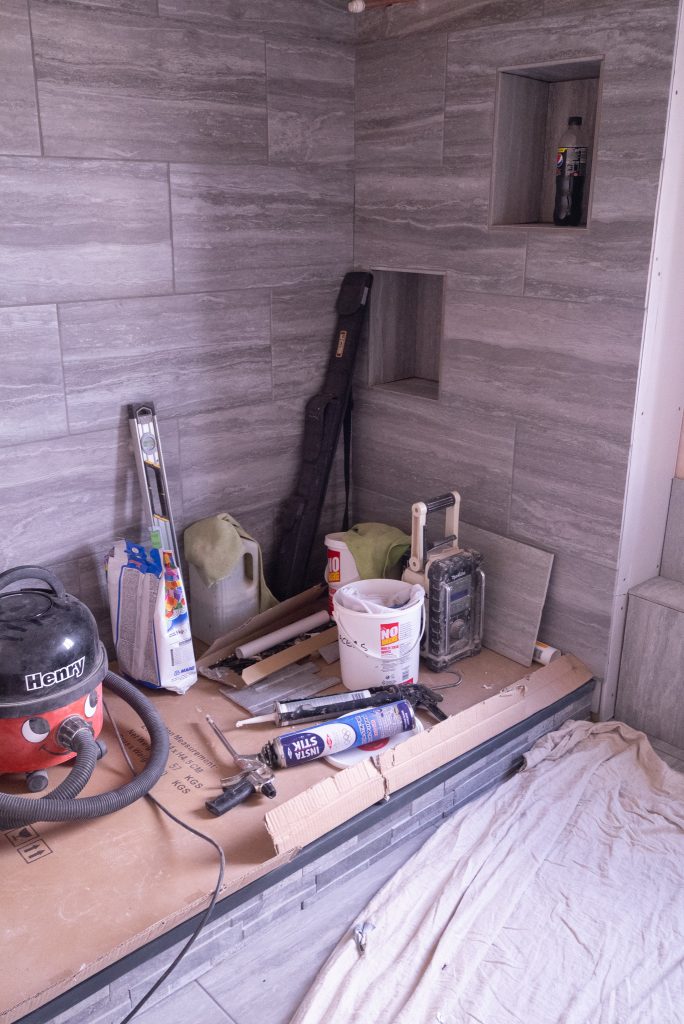 So anyway, one day they’re ripping out the old bathroom, and three days later, the shower tray is in, the fake wall built and pretty much all the plastering is done. These guys did not hang around! A few days after that all the tiling was done and the sink unit being built. 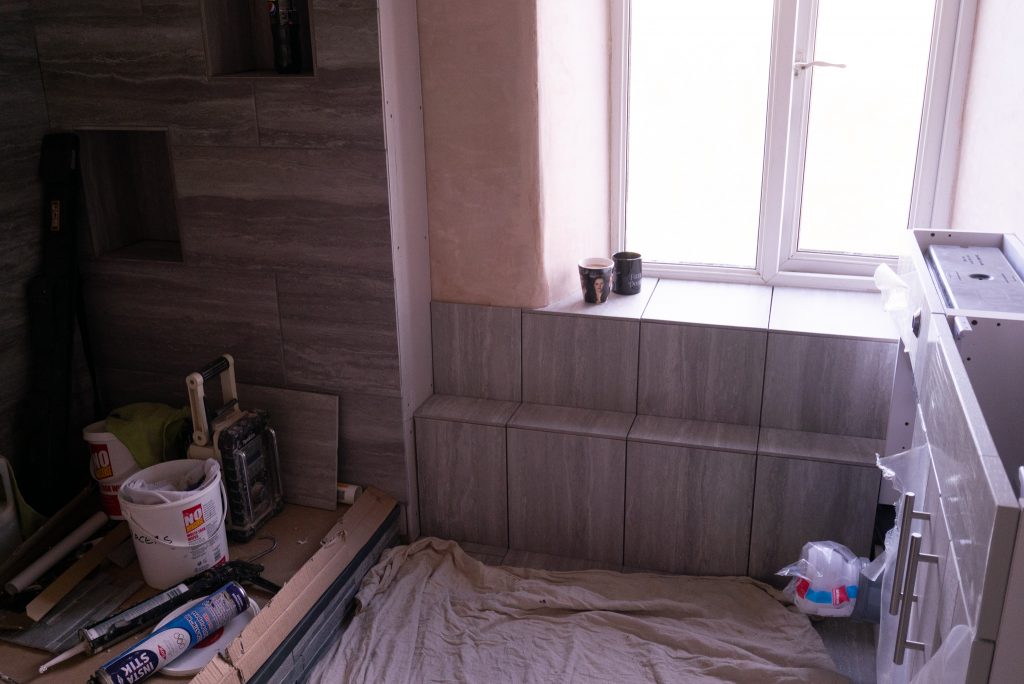 So, to keep things simple and costs down, we didn’t do any re-jigging of the layout or plumbing. We simply decided to swap the old bath for a giant shower. We chose a dark grey riven slate shower tray (I’ll do a complete run-down of 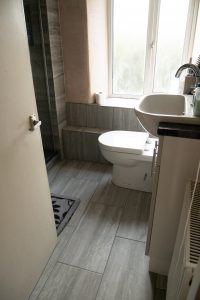 materials and costs in another post) and to make sure there was enough shower storage, I wanted a fake wall with big alcoves to put in all our shower gels and shampoos etc. They seemed to like this idea as it apparently made things easier for them as well, however I’m not entirely sure why! Unfortunately they couldn’t put the shower tray at floor level because there was a floor joist right where the plug hole is – it would have looked a lot nicer if they hadn’t had to build a riser to make room for the drain, but these things happen.

The new loo and sink are more-or-less in the same position as the old ones, but fitted into a shallow cupboard unit. I was worried the cupboard was so narrow it would be pointless, but you can fit a surprising amount of stuff in there! The best thing though is that it hides all the pipes and drains that were previously on show. 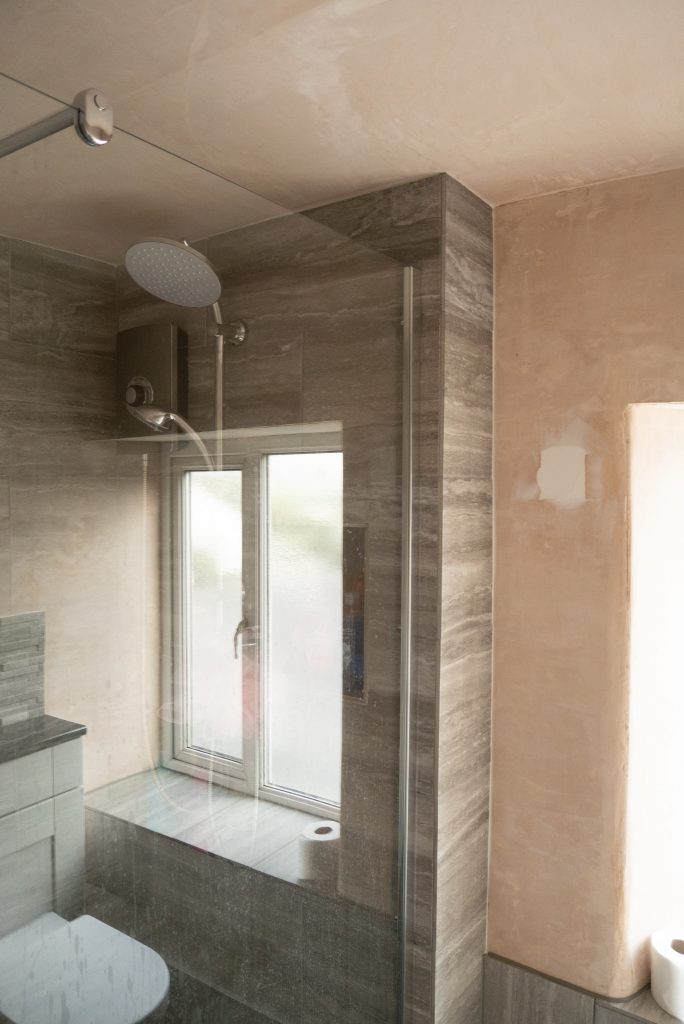 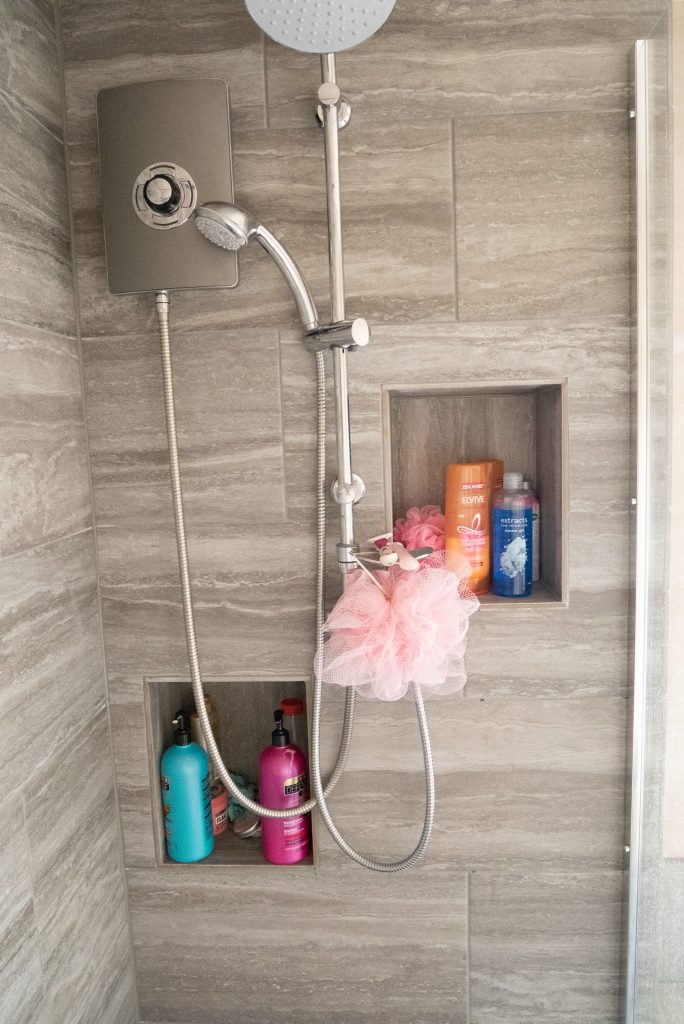 So, the builders left the building and we have our house back to ourselves. I have to say, I did actually get used to it; I made them their usual tea and coffee every morning, and stopped stressing as to whether that was enough. I offered them the use of our kitchen and dining room at lunch time, but they still ate their packed lunch in the van. The main difficulty was keeping Loki downstairs with Chris for so long – he gets restless after a while and interrupts Chris’s work calls with whiney noises. We also shut the cats downstairs so we didn’t have to worry about them getting out with the doors left open; and there were a few awkward moments when they were looking for me and I was in the garden, or in another room etc. And of course, I couldn’t have my usual afternoon nap, so I was particularly tired for a while.

However, it’s all worth it! And I’m feeling more confident to deal with tradespeople again. Hopefully the next project will be on the horizon soon.

By the way, I have been filming everything, so that will be a YouTube video coming soon (hopefully) when it’s all finished. My next bathroom renovation update will be all about the decoration and styling. For such a tiny room, this is proving a lot more difficult than I expected!

Styling a linen dress and my new Cath Kidston bag