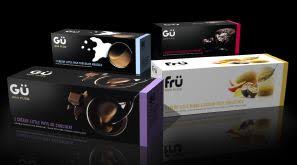 This is my review of some posh puddings. (In that case I should probably say desserts, or even sweets, but never mind).

If you’re in Sainsburys and you go to the aisle with the yogurts; at the end there are a few posh refridgerated puddings, and amongst them you’ll find GU and FRU things. (The Us have little dots over them, but I’m not technically minded enough to know how to do that with this keyboard).

These puddings are seriously the most gorgeous things I have ever tasted. My favourite is the siscillian lemon cheesecake. The rasberry and chocolate thing is delicious too, and recently I went to barbeque and was introduced to the delights of the chocolate brownies with warm chocolate sauce. We agreed that these were definitely designed by women!

They aren’t as cheap as a donut, but they really do cheer me up when I need it most! The smaller ones, such as the cheesecakes, are £2.99 for 2. (But you get to keep the little glass jars they come in; and if you want to try and recreate them, I’ve tested them in the oven at 200 degrees (again, too inept to find the little round circle). The brownies are more, for £3.99 (8 in a box) and an extra £1.50 for the sauce (which can also be eaten cold as a sort of truffly thing). All the types I’ve tried are very filling and it really is a struggle to eat more than you wanted to eat, but want to really; if you know what I mean (and I’m sure you do).

My only criticism is that you really can’t eat them when you’re on a diet and I just don’t think that’s fair. And they are just a step away from the low-fat lemon mousses that I just about rely on when I’m on a diet, and that’s just about all of the time.

Incidently, they also do chocolate ice cream, but I won’t be reviewing that, because even GU won’t get me to like ice cream. (Yes I know; everyone tells me everyone likes ice cream. But I don’t, so deal with it ok?!)

Make me a supermodel