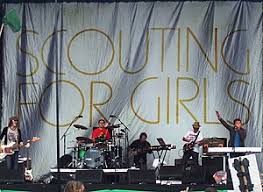 I wish I’d bothered to go and see them at Glastonbury festival now, but we got caught catching up with some friends at the Jaz World Stage at the time. Anyway, Scouting for Girls were really good; much better than I expected and I was having a fabulous time, but my husband got stuck with the whinging kids and in the end we left before they finished their set, which was a shame.

My only complaint was that I’ve lived here long enough now to be offended by the fact that that the lead singer, often talked to the crowd as ‘Glastonbury’. eg “You’re a great crowd, Glastonbury”. Glastonbury is 7 miles away. We’re in Pilton. It also felt like he was rolling out the lines like he would at all their other gigs.

Well, I haven’t got much more to say. Hopefully I’ll catch them at the festival again. If you get the opportunity to go and see them play live, then I would certainly recommend you do so.