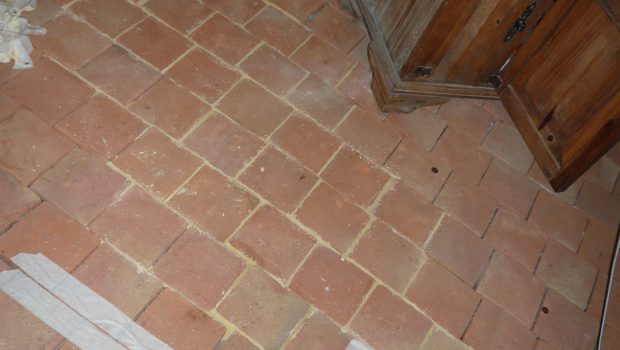 An update on the floor.

I allowed a week to do the floor. It took just over three! Thank God for the Harry Potter and the Half Blood Prince audio book that kept me company and sane. At my last floor blog, I’d just run out of lime mortar, and decided to save loads of money instead of the planet, by buying bags of normal cement mortar ready mixed from Focus – I think it was 7 bags altogether at £10 ish each. At first I thought it worked much better than the lime, but in the end, I’ve concluded the tiles weren’t wet enough at the beginning, and I don’t think it made any difference at all with performance.

The batches of tiles that got wet in the rain are the ones that stuck the best – and that certainly is the key to laying this sort of tile. Once I realised this I was splatting down the mortar with a very wet mix; spraying the tiles with water right before laying, but the moisture was absorbed so fast it looked like magic. There are several that haven’t stuck and I’ve glued them down with pva glue! Now, about 5 weeks later there are still some that need gluing again. Hopefully this will stop once I’ve grouted.

Now I’ve finished laying the tiles, I love them and am in no doubt that I chose the right flooring. They look so nice. Yes, they do “undulate” to put it politely, but I think that adds to the character! The only bit I haven’t done is the corner where there is a secret staircase to the cellar. Now we’ve shiftet the carpet properly, we can see where the opening has been screed with concrete. It’s sounds so thin, I’m scared to walk on it, so I don’t think it will be a big job to knock it through.