Happy New Year! and A Wedding in December by Anita Shreve book review 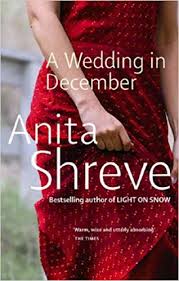 I haven’t done a book review for ages, so I’ll start the new year with A Wedding In December by Anita Shreve.

I’ve recently joined a book club and our first meeting brought us all with pretty similar opinions about the book.  I’ll get straight to the point and say that I won’t be recommending it to friends, and here’s why:

It was deathly boring! I kept thinking that all the waffle was maybe leading up to a great exciting ending – there were clues and hints all the way through about the possible murder of one of their friends; but sadly no. The whole set up of the book is a college reunion for a group of friends, of whom 2 of them are getting married. As a character study the book is brilliant – I know those people inside out and the theme seemed to be about whether or not it’s ok to have an affair or leave your husband and children for someone else. The interesting thing is, the main character did just that, and yet she was probably the most likeable character in the book. So if anything, the book could spark off an interesting debate about this subject – is it ever ok? What if you know the person you want to leave your spouse for is your true love? How does it effect the children?

The other main character is also deciding whether to cheat on his wife, and the book ends on a stupid cliffhanger that almost everyone at the book group thought was pathetic and annoying.

If you do read the book, however, don’t be too put off by the story that one of the classmates, Agnes writes. Just like the book itself, the story was slow and a bit dull, but if you stick with it, it turns out to be a reflection of Agnes’s secrets and worries and develops her character even more.

There isn’t much more to say about A Wedding in December. It took several hours to read, and although, they left me knowing the people in it fairly well; nothing much happened and I prefer books that contain more than a hint of a plot.  Although some people in the group insisted Anita Shreve’s other books were better,  the ending of this one was so irritating, that I won’t be reading them.

Doing up the cellar and games room + review of Focus paint.

Doing up the den in the cellar and review of Crown Shimmer & shine paint.