Doing up the den in the cellar and review of Crown Shimmer & shine paint. 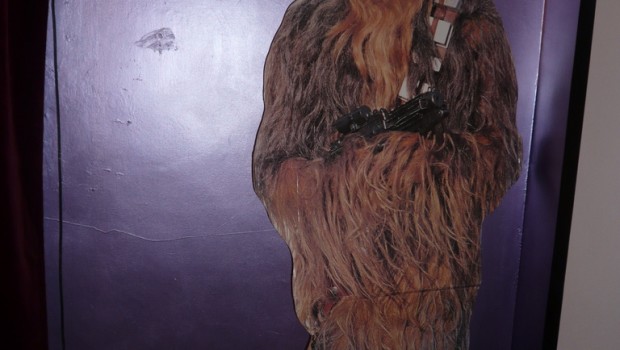 We struggled with naming this room – it used to be the cinema room because that’s where we have the projector and screen set up, but that sounded far too grand for a room about 9′ by 7′! So now it’s the den. Again, my daughter wanted to watch films in there with her friends, so her birthday party was the deadline to get it done.

This time my youngest daughter got to choose the colour and I tried a million tester pots with no luck. We used to have a strong dark purple in the hall of our old house, which I think came from United Colours of Benetton paint. You can’t get that now (at least, not around here) and the only colour that came close was one by Dulux. However, the paint in the tester pot with the weird applicator was so thin and runny, it left a transparent sheen of purple on the wall. It didn’t bode well, and I was not going to risk it. Eventually I found ‘Dazzle’ by Crown shimmer and shine, and I was pleasantly surprised. Two coats covered the walls with a little touching up afterwards. There is still 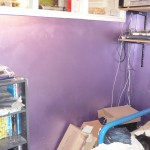 about an inch left at the bottom of the 2.5l tin.

As well as looking very cool, the metallic paint has the double advantage of reflecting light around a small dark room. I was surprised to find that my Mum even approved of the bright colours the kids chose in the cellar. She said it was just what was needed. To be honest, I wasn’t entirely certain, as paler colours would be the more obvious choice for cellar rooms; but it’s now so colourful and cheerful, I think she’s right.

Happy New Year! and A Wedding in December by Anita Shreve book review