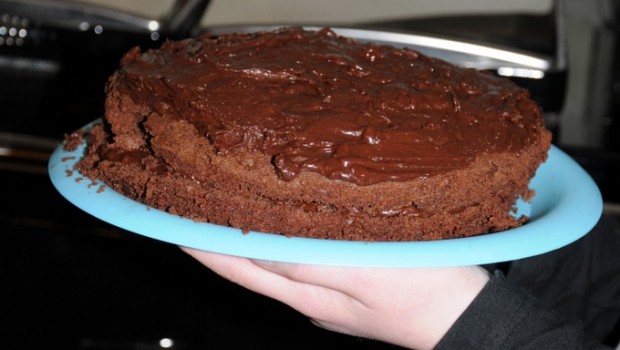 I’m a bit scared to say it – but I think we’ve cracked it!

There are a few things we’ve learned so far, that will perhaps other new solid fuel Rayburn newbies. Opening the spin wheel completely, doesn’t make it hotter if it is windy outside. This may be different for you if you’re in a built up area; but where we are – exposed at the top of the hill – means that I think the draft was so much it was actually putting the fire out! About half way open seems to be right for us most of the time.

Also, whilst the instructions say it’s ok for the wood to burn on a bed of ash, we’ve found this isn’t the case. At the end of week one, we were really struggling to get the oven hot at all. Then, one morning when the fire had gone out overnight and I didn’t have time before the school run to light it from scratch in the morning; I left it till lunch time, and we gave the firebox a good clean out. There were several clinkers (hard molten ash) stopping the rest of the ash falling through. We thought it was strange that we hardly ever seemed to need to empty the ash tray when I’d read on forums they need emptying up to 3 times a day. So, after we did that and re-lit the fire, it got lovely and hot and finally I had my first bath.

The next day, not so good. Then we realised the air vents at the back were still covered in ash; so when the fire died down a bit, we brushed all the ash forward and the oven heated up really quickly. At last! we thought we’d solved all the problems. Yet, once again, the next day we were stumped. All the ash was pulled forward so the vents at the back were clear; and yet, we couldn’t get it up to temperature again. This time we realised, that in pulling the ash forward, we’d blocked the air vents at the front, that draw the air in. So we brushed the ash into the middle and that seemed to do the trick. For the last couple of days since we figured all this out – we don’t seem to have had any problems. I hope it lasts!

Cooking has been fairly successful. On Easter day I did roast lamb, with roast vegetables, which tasted delicious. I’ve done several cakes – and they are so lovely – slightly different from electric oven cakes in that they are more crumbly, and for some reason they don’t rise. Maybe because they’re in for longer on a lower heat. However, on Easter Sunday, while the oven was on the R of ‘Roast’, I cooked a lemon cake and a chocolate cake, and both had the same problem: although they rose nicely, and sprung back to the touch, when I tried taking them out the tins, it turned out they weren’t cooked inside. So they had to go back in the oven for a while. I did a pretty good job at rescuing the broken-up cakes with lemon curd and chocolate icing respectively. Yum!

Would I be able to pick your brain on the operation of the Rayburn? We’ve moved into a small cottage with a 345W and are having similar problems to those that you had with getting it hot etc and banking it overnight.
Do you have contact details or can I leave you mine?

Feel free to pick my brain. If you’re happy to do so in public here, it may help other Rayburn users. If not drop me a line at helen@wickedfaerie.co.uk. Almost a year on I really really do think we’ve cracked it! Almost.

To get it hot after it’s been ticking over: keep the dial at the top,back,left on 8. Keep the flue chamber door closed. While the flames are low, wiggle the stick on the left (can’t currently find instructions, so don’t know the proper names!) several times so the ash falls through to the ash pan. Empty the ash pan. Riddle it again. Use a poker or something to swish around whatever is remaining in the firebox. If there are any obvious large clinkers, pick them out with barbecue tongues. We use an iron spade type thing that came with a fireside set to pull any remaining embers to the middle. Btw if it’s smoky with the door open, it helps to switch to ‘cook’ rather than ‘heat’.

This has cleared the airways. If the flames have got very low, chuck in a bit of kindling and just a couple of logs to get it going again. Keep the spin wheel fully open and also the flue damper for about half an hour. After the first 15 minutes, add another couple of logs. After half an hour fill up the fire box with logs and close the spin wheel and flue damper to half way. It should now be ok to leave for an hour and the temperature should rise nicely. If the flames are going really well, you should be able to close the spin wheel and flue damper a bit more, which helps to retain heat.

Check on it hourly and to keep it hot I never let the firebox be less than a quarter full of logs and embers, and usually top it up to three quarters full.

To bank it down: riddle it again. Fill up completely with logs. Close the spin wheel and the flue damper. Open the flue chamber by sliding across the lever. Turn the dial on the top,back,left round to 1. Turn off the central heating pump if you have one – though this doesn’t make much difference if you forget. And switch to ‘cook’.

This mainly works successfully when the fire was going well in the first place. If we’ve forgotten to keep checking it in the evening, it often isn’t hot enough to bank down all night. Also, if you do this while it’s right up on roast, make sure you really fill up the fire box with logs as the first few will still burn quickly.

Hope that helps! Please let me know if you have more questions.