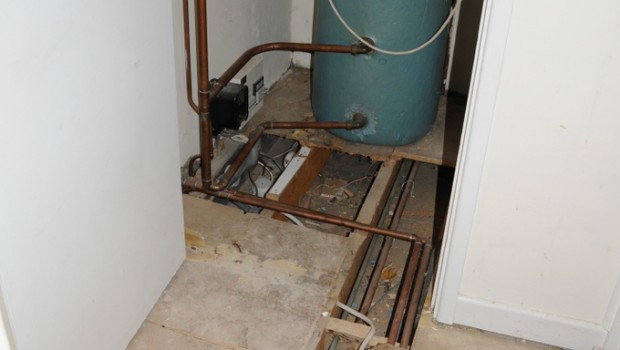 Why does having tradespeople in always make me feel so unassertive and inadequate?

We chose this guy because he advertised in the local parish magazine; he seemed nice and helpful and most importantly, would do the chimney, install the Rayburn and do the plumbing, so we didn’t have to juggle different people at the same time. To be honest, on the whole we were very pleased with the service we received; the job got done smoothly, but there are a few small niggles, that I just wish I could deal with better.

They seemed to spend an awful lot of time sweeping, so we told them not to bother clearing up after themselves. However, the last day came, the Rayburn was lit and off they went for the day while we waited for the system to heat up. One of the two guys came back later to check everything. There was one radiator that didn’t work. It was one from the original system, and he didn’t want to do anything – I had to insist he check it out. When I got back from the school run he was gone and over the weekend, the radiator did heat up in the end. He had said he’d come back Monday to check everything had been ok over the weekend and lag the hot water tank. On Monday he didn’t come, but I spoke to him on the phone on Tuesday and he had forgotten he was going to come, and that they’d pop in . I also asked if they’d be putting the floor upstairs back together and he said that Chris had told him not to worry about that. I sounded dubious in my reply. “Did he?” (I knew full well he hadn’t because I’d already checked!) The plumber then said that he could, but basically it would cost more in labour.

So, instead of pointing out that we’d paid for 2 guys on Friday and they’d hardly done anything, I just said, “Oh right, well we can’t afford that, so we’ll have to leave it.” Why am I so pathetic? And the phone conversation has been bugging me ever since! At least I did stop them from sneaking off with the copper. After checking on message boards, it seemed the done thing to let them take it if they take the rest of the rubbish. Well, they didn’t – they left everything stacked up in a pile outside. And I was mostly annoyed that one of them was knocking off the water tank jacket and bashing it up on time that we’re paying them for!

Other little things include the fact that they just picked up one of my towels (albeit a pretty old one) and used it to wipe up their dirty mess. Their daily rate was £180 for 2 of them; which is pretty good (as he pointed out frequently), but I think this made them think they didn’t have to worry too much about things like that. As you may have guessed, I’m just as cross with myself for being useless, as I am with them, but when we get the bathrooms done next year, I’ll be ringing around a few other places rather than going straight back to this guy. I’ll also do my best to be more assertive. It’s all about being exactly clear what we expect, and that we don’t want to pay them to sweep, but we do want floors to be put back together!