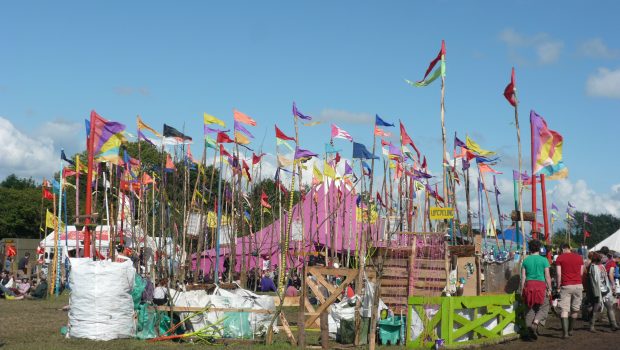 It’s festival season again and as usual we were all there and basking in the sunshine! Here’s my little review of this year’s Glastonbury.

This one will most definitely be remembered for the heat. The tents were too hot to hang around in, so even the Green Fields were more crowded than usual. Saturday was the best/worst day, depending which way you look at it. It’s difficult to complain when standing around in a field in the rain is no fun; but that day was really too hot. Every cm of shade was crammed with people already. In the past when it’s been too hot (yes this has happened before!) we’ve sat reasonably comfortably in the circus/cabaret tents, but this year they were so full of people the heat was stifling and we couldn’t bear it.

So this was the first year we didn’t watch a single thing in the theatre and circus fields. Weird. I missed it a lot actually; we’re usually there loads of the time. On the plus side, we didn’t see Space Cowboy – Hooray! Altogether it was a different festival for us actually as my eldest daughter now camped and spent most of the time with her friends. And although she and my youngest did pop into the Kidz field for a little while, I didn’t go in with them at all. I missed that too.

There was a lot of music we wanted to see on the Pyramid stage, so we became one of the group of people we are usually condescending towards and literally set ourselves up for pretty much the whole day on the Friday and the Sunday. It was annoying actually that for once there were really good acts on early in the day. Last year we didn’t go in till mid afternoon at least twice and if we’d been able to do that, we could have stayed indoors for the heat and stayed up later at night. Ah well – shouldn’t complain! It was definitely one of the best recent festivals music-wise. I’ll do reviews of the bands we saw later.

It was a good atmosphere – everyone was happy and chilled. I saw no bother at all though I hear that thefts were up which is a shame. I got lost in the unfair ground and Arcadia while I was looking for water. They looked strange enough during the day. One year I’ll have to go there at night and have a good explore and try and dance in every single little place there is to dance there. That’s something to look forward to.

Here’s a summary of the other things I can think of:

It was funny seeing all those people wearing Hunter wellies – despite not a drop of rain – because they paid £100 for them and they will wear them even if it means sloshing around in sweat!

Sweating off liquids meant less trips to the portaloos!

Dust – not good for the lungs, but did add to the suntan.

I nicked that line from the Q Daily. It was the only decent thing I read in there this year. They must’ve printed more because usually they ran out by 10am, but this year there were plenty to go round. Unfortunately they compensated by halving its usual size and having very little entertainment value for in between acts on stage.

Biggest staging mistake of the year: The Wurzels in the Avalon tent. We couldn’t even get near. They’d easily fill the Pyramid stage field and make a perfect afternoon act. Shame; I really wanted to see them – everyone else here knows all the words to all their songs and it is about time I caught up.

Best staging decision of the year: Rolf Harris on the Pyramid Stage opening up on Friday. (He won the mistake of the year last year for the Jazz World stage when we couldn’t get in the field and no-one could get past either.)

Best improvement of the year: The sound system on the Pyramid Stage. They’ve finally got it! It was loud enough at the back without distortion of the sound. It was so nice to be able to sit at the top of the hill without the people talking around you being louder than the music.

The rain and being old!