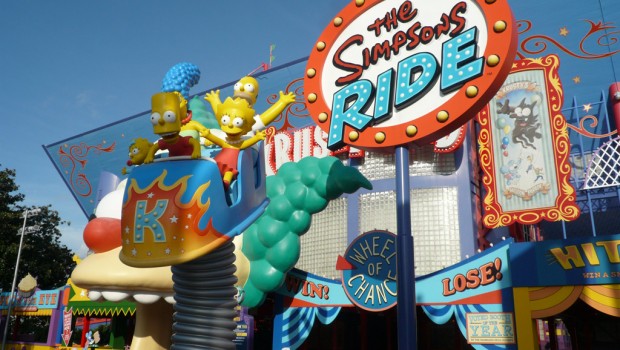 A review of our time at this theme park…

We were up early for this day as we knew we’d come back to the villa in the afternoon for a swim and a nap. The 1st thing we came to was Scooby Doo doing a meet and greet, but he left for some snack just as we were next in the queue – most annoying as we all, but especially Jude, are fans of Scooby. It was a crowded day and we had to queue for half an hour for pretty much everything, so we didn’t get as much done as we wanted to.

There isn’t an attraction like the world famous studio tour like there is in California, so their equivalent ride where you just do the bit in the underground train was somewhat a let down. We did the Jaws boat trip though, which made up for it, because it’s loads 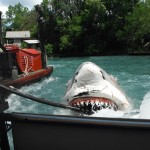 better than California. We did Twister, where they demonstrate cyclone special effects, but it wasn’t nearly as windy as I expected it to be. The flying cow was funny though, as were the cow toys in the gift shop afterwards.

Much of our time was spent queuing for the Simpsons ride. We were literally waiting for nearly 2 hours – karma for being so lucky at Harry Potter. At least there’s in-queue entertainment by way of tellies playing a Simpsons film (about queuing for a theme park ride) and it’s undercover with fans. It’s worth it though as the ride is fantastic. It’s a simulator ride where the cart thing you sit in jolts you around (not one to do right after eating) quite a lot and the massive screen in front of you really makes you feel like you’re on a roller-coaster. It’s funny too – listen out for all the little jokes. This was Jude’s favourite ride and I loved it too. Probably best not to do this one immediately after eating!

We also watched the 4D Shrek film, which was really funny and definitely worth going to see. So then we left to have a rest at the villa, but came back later in the holiday in the afternoon. The queues were much less this time, and we were able to do everything we missed before; the Men In Black ride, where you go round on a track shooting at things with a laser gun!; The Terminator 2 show with great 3D effects; the animal actors show, which is impressive and kids love it; and back onto the Simpsons ride again, this time with no queue at all as it was tea time. Loved it again!