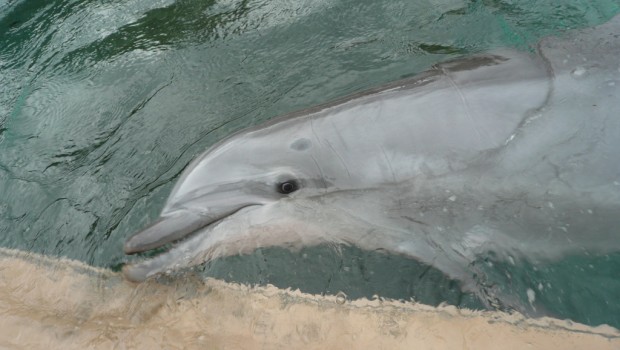 This was one of the nicest days we had on our holiday. This is why…

It was so relaxed, the crowds weren’t there and it had a really nice atmosphere. I’m amazed so many people miss this park out really, though it definitely had a higher percentage of British people to Americans for some reason. I admit, we considered leaving it out because we’ve been to the one in San Diago, California twice now, but I’m so glad we didn’t. It’s a bit smaller than the one in California and can easily be done in one day. The shows are different, longer and better, so it’s worth checking out the timings and planning your route around the park accordingly.

The dolphin show was much more exciting than I was expecting; full of people doing circus stuff all over the place as well as the dolphins jumping out of the water and performing tricks. There was some sort of storyline with a girl dreaming about being a parrot or something; and at one point loads of parrots came flying out behind us – quite impressive actually. 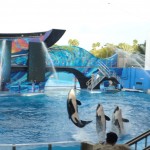 The killer whale Shamu show was spectacularly cheesy and it’s a shame you have to put up with all the guff about the environment in order to see the stars of the show. The massive killer whale is amazing, and watching the young one learn the tricks from its mother is really cute. It’s true, it is lacking a bit now that the trainers aren’t allowed in the water; but safety first!

We saw all the animal exhibits, the manatees, the penguins, the aquariums including the large shark one, the stingrays etc and we also decided to pay $5 each to feed the dolphins and give them a stroke 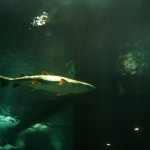 under the chin. We had a queue a long time, but I’m glad we did; we all enjoyed it and dolphins are cute!

There’s also an underwater themed circus show, which I’m glad I insisted we see as as it was amazing – probably one of the best as circus shows seem fairly common at all these theme parks. The sea-lion and otter show was fairly funny – definitely one for younger kids.