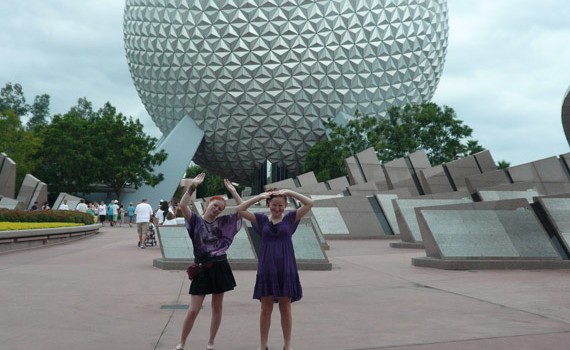 The theme for this park was sort of about the world, the future, and different countries around the world…

We timed this wrong again, and beware of this when you’re doing your Florida holiday planning; although the park closes at one time, many of the attractions closed a couple of hours earlier. On our first visit we got there at 6pm and many rides closed at 7, though we didn’t realise it till it was too late. We started with the space through time thing inside the giant golf ball. This took an hour, but the kids enjoyed it and it was interesting. If you’re there a whole day, try and do that one at the hottest point as it’s all indoors and air-conditioned!

We then went to the Finding Nemo ride, which was the same story-line and visual effects as the one in California, but you weren’t in a submarine, you were on a sort-of tram in front of a giant aquarium. We’ve never seen one so big and that was amazing in itself. It’s clever how they get it to look like Nemo is swimming amongst the real fishes. That’s another one I’d recommend doing when it’s hottest outside as you come out into a large building full of other under-water exhibits and educational things the kids can do.

We went to test track next, but the queue was 100 minutes and no fast-passes left. So we did Mission Space, where a group of 4 people are given a job to do on a pretend space flight. It was a bit silly, but actually did a really good job of feeling like you were in a rocket. Warning: you are put in a very small enclosed space, so don’t do it if that bothers you.

So then we spent a little time in a Disney shop and just had time to get to the lagoon for the World Illuminations show. We were too 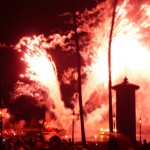 late for a good spot though and my view of the world wasn’t the best. They were amazing and very impressive, though, in my opinion not better than Magic Kingdom’s fireworks, contrary to the popular view on The Dibb. Being at the back, did at least mean we were first out again at the end!

We came back a few days later to try and do all the things we didn’t before, but we still didn’t get to do test track – maybe we were too late for fast passes again. I got fast passes for Sourin’, but I think it turned out we didn’t need them. If it’s a busy day, then get them, because it’s the sort of ride you do enjoy, but wasn’t so good that it’s worth queueing ages for. You sit in a compartment that goes up in the air and your feet dangle so it’s supposed to feel like you’re flying over the scenes in front of you projected onto a massive 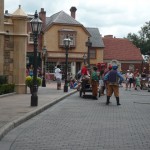 screen. The movement of the seats and a wind machine add to the effect. It basically needed completely re-filming – it looked fuzzy and old and there were holes in the screen, so you couldn’t get immersed in it. Also, the film just flicked from one scene to another, when they should add clouds or something between scenes to make it feel more realistic.

By popular demand we did the Finding Nemo ride agan, and then left Chris there – his feet were hurting too much – while the kids and I walked round the world bit. It was quite nice and relaxing just wondering round watching bits of the performers that were in some of the countries. It was a shame there was nowhere in shade to watch the English one, which was actually done by English people – performing a George and the Dragon play, and looked pretty funny.