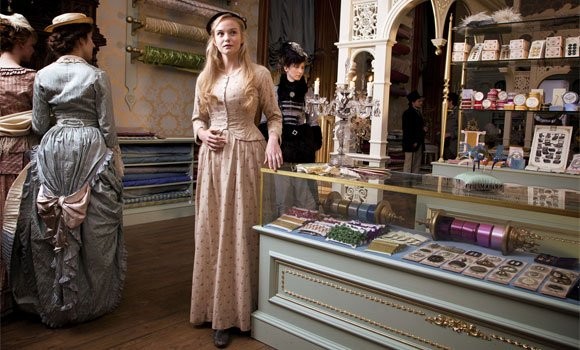 The latest BBC costume drama, The Paradise is quickly becoming my favourite ever. I already look forward to watching it more than Downton Abbey, and Larkrise to Candleford is my other contender. It isn’t surprising considering they are made by the same team…

It’s lovely to see Ruby Bentall playing much the same character as Minnie, and also Matthew McNulty, who was the clockmaker in Larkrise, playing an important part in The Paradise. I clapped my hands together in delight when Olivia Hallinan , who played main character, Laura, also joined them in episode 2, particularly as Sarah Lancashire, prim and proper Miss Audrey who runs The Paradise’s lady’s department, was the voice of the older Laura.

Set in a Victorian department store; I want my home to basically re-create the set. I want all those duck-egg blue counters, sparkling chandeliers, silver mirrors, painted wooden shelving, and that’s before I’ve even mentioned all the things for sale. I desperately desire all those lace gloves, hats, buttons and reels of ribbons. And the clothes. Of course, being a costume maker myself, it is the clothing that delights me the most. I can’t bring myself to delete the episodes from my Sky+ because I need to watch them again, pausing it regularly so I can sketch the costumes. I have a feeling my next creations are going to be heavily influenced by the Victorian period. Thank you Joanna Eatwell for putting such lovely clothing on the telly for me to gaze at!

There is generally a nice neat story-line rounded up in each episode, along with long-running plots such as the will they / won’t they between Moray and Katherine, and Moray and Denise; the lovely back story between Miss Audrey and Denise’s uncle, Edmund; and what on earth really happened when Moray’s mysterious saintly wife died? (I personally think she’s still alive actually!) I urge you to catch up on iplayer if you haven’t been watching.

The Comedy Box at the Hen & Chicken in Bristol

Thank you so much for the review! (stumbled upon your blog via tryhandmade) I loved Larkrise to Candleford and this sounds wonderful.

Hi! Thank you for your comment – I’ve just watched the last episode in the series and I’m praying BBC make another!

I read that there will be a new season. There has to be with a cliffhanger like that! Yes I watched the entire series over the last week. 🙂

I did a bit of google detecting and have discovered that there is going to be a new series. Yay! Can’t wait.