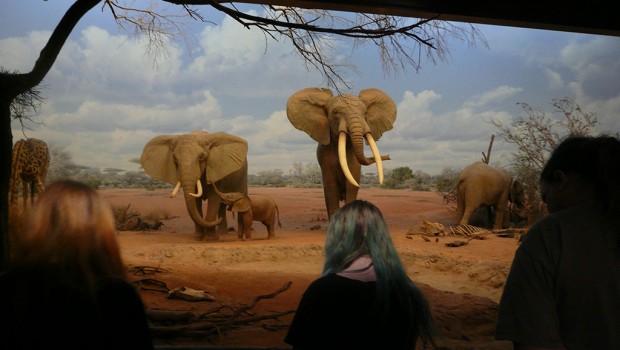 It was very different from the one in London! Firstly, it wasn’t free like we expected – it was $6 each plus $6 to park the car. This is what we thought of the place…

We were a little bit worried at first when the main attraction seemed to be two vast halls; completely empty in the middle but with displays all the way round of animals found in the north and south continents of America. These were plastic animals posed in a scene of their natural habitat. The signs in front gave very basic information about the animal.

It was quite a relief when we found the dinosaur halls, which were massive and had loads of skeletons and fossils and interesting information about them; mainly aimed at younger children. It was very impressive, although they were still saying that the tyrannosaurus 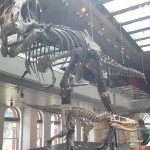 rex was the biggest dinosaur, even though it has been proved not to be a few years ago. They really should keep up to date.

There was a large room all about the history of America and how it linked in to world events. This was interesting to see it from the perspective of a different nation. For example they labelled Sir Frances Drake as a pirate, and when I saw a cut-away model of a ship in the Armada battle, I immediately assumed it would be a British ship, but it was a Spanish ship.
Also, considering we, getting on in years and living in Europe, have been brought up to say ‘Native Americans’, we were amazed that everywhere they were still called Indians.

There was an interesting room about Mayan and Aztec history, which we would have spent more time in if our aching feet were up to it. There was also an insect hall, which was rubbish! Just a couple of spiders and cockroaches really. Considering they have huge banners outside advertising this, I’m glad it wasn’t a main reason for going.

Of course, it isn’t nearly as big or good as London’s Natural History museum, but if you have kids interested in dinosaurs  then it’s definitely worth a visit. We also ate in their cafe, which was reasonably priced and tasted fine; though we had to wait a long time. The building is situated in Exposition park, which has a lovely rose garden with a fountain, and would be a lovely place for a picnic.