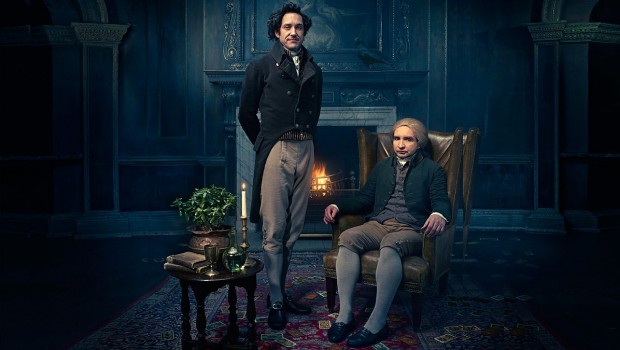 If only I hadn’t just watched episode three, I would be positively gushing about this series. I have loved every second and watched in raptures on a Sunday evening. It’s no use, as a die-hard book fan, I’m going to have to have a moan about the changes they put in last night…

If you haven’t read the book and don’t want to know the differences, then I guess I should announce a spoiler alert here. What on earth was it with Jeremy Johns dying? And the loss of all the books? What utter nonesense. In the book Jonathan strange enjoyed and relished the challenge of the different sorts of magic he performed during the war, but in the programme he seemed to resent his orders from Wellington. In the book Arabella found the gentleman with the thistle-down hair rather amusing; not offended by him in the least. Lady Pole trying to kill herself and kept in restraints? The tapestry I could sort-of understand, but not Mr Norrell stealing Jonathan and Arabella’s letters. There are subtlties in the book that you don’t pick up on the first read, and there might have been a hint that a couple of letters went missing, but after ten reads I don’t recall Childermass taking their letters at all.

In short, I was left feeling a little flat, if not disappointed after last night’s episode. However, there are so many good points to the adaptation it can be forgiven. The characters are spot on. Jonathan Strange played by Bertie Carvell is particularly perfect for the role, and probably helped by the fact that he was a fan of the book first. To be honest I could majorly commend all of them. Paul Kaye as Vinculus; Alice Englert as Lady Pole, Charlotte Riley as Arabella Strange and Aryon Bakare as Stephen Black, and it took a little longer to be sure, but Eddie Marsan as Mr Norrell are all exactly as I imagined. (Sorry Marc Warren, but I had pictured The Gentleman to be younger, more handsome and charming than the creepier sinister side we see all the time in this adaptation. His hair isn’t quite right either, but never mind!)

The set designers need an award because they are beautiful and capture the magic perfectly. Of course, I love the costumes – Lady Pole’s etheral dresses are outstanding. I wish there were more ball scenes to see more of them – hopefully there are more to come.

I can’t wait to see how the rest of the series pans out. I hope there aren’t too many more unnessessary changes from the book.