A Classic Evening with Rebekah Smith in Pilton 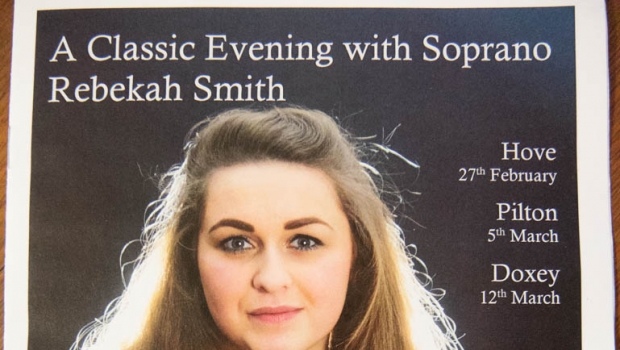 Pilton Parish Church kindly left the heating on all day so that it would be warm enough for us to watch this classical recital last night! My husband and I have talked about going to something like this for a while, and when the opportunity fell into our laps (or rather, into our village), it was a chance not to be missed…

So feeling all grown-up and cultured, and not entirely sure what to expect, we smartened ourselves up a little and entered our beautiful medieval church. Introduced by Reverend Butler, Rebekah took her place at the front, with Phillip Leslie, her pianist by her side. I’ll get to the point now: the performance was utterly amazing. How can so much talent exude from people so young?! Not only were Rebekah’s soprano vocals spot on, but she performed the music as well. She told the story of the songs with expression and the emotional ones with feeling. Seriously, tears were rolling down my cheeks during Puccini’s O mio babbino caro (which you would recognise even if the name isn’t familiar).
I’ll freely admit that the extent of my opera knowledge has been gained from watching every episode of Inspector Morse several times; but from that, the odd advert and the 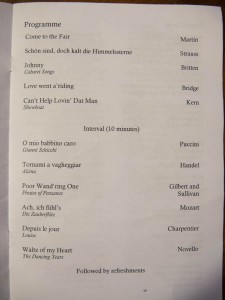 occasional listen to Radio Three, I would say that Rebekah has an exceptionally strong voice, and those high notes she hit were astonishing. It seemed to me that the pieces she sang were rather difficult too. Here’s a photo of the programme, so that those of you who know, will see what I mean.
Oh my goodness, I know I’m gushing like a fan-girl, but I really do feel I was privileged to have seen classical stars of the future. I urge you to go and watch them while you can still afford to. In the same way you get the people who talk about seeing Coldplay on the Other stage at Glastonbury before they were big, like they themselves had booked them and were personally responsible for their success; at some point I will be boasting, ‘Well I saw them for just £5 in my local church don’t you know’!

The only negative point of the evening was the embarrassingly small size of the audience. Rebekah and Phillip deserved so much more. The performance was much shorter than I expected, at about forty-five minutes (including interval), and I wonder if the word ‘short’ should be added to the adverts. It might have drawn those worried about sitting in pews for a long time out of their homes, and families with fidgety children might have been encouraged to give it a try. It was certainly the perfect introduction to classical songs and opera and I wish I’d dragged our two along for a bit of refined entertainment. Before each piece, Rebekah even told us what was happening in the story and the part she was singing so we really could enjoy it without knowing about the operas previously.
So if you are in the vicinity of Doxey, Stafford, please go and see them on the 12th of March – you’ll be so glad you did.
Roles Rebekah will be singing soon include a Gossip Noye’s Fludde by Britten with Blackheath Children’s Opera in April 2016 and Sarah in Stephen McNeff’s world premiere Banished with Trinity Laban Opera July 2016. 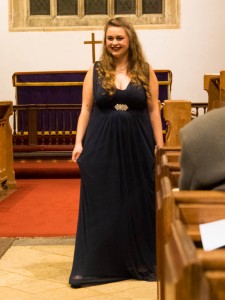 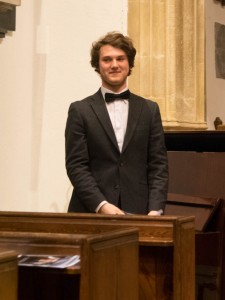