New and old items for our Living Room 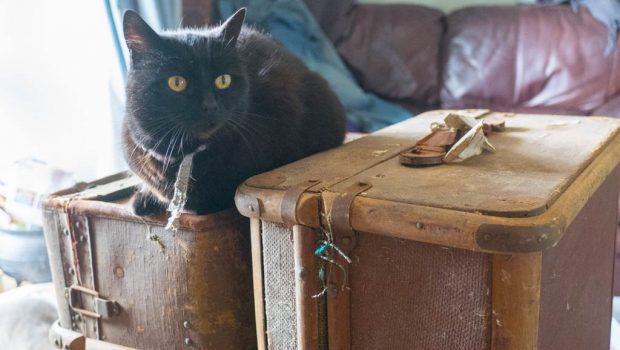 Following on from my last home blog post about moving the living room around, we needed some things to fit the new configuration. Preferably I’d have some antique furniture that would not only be beautiful, but also serve as a handy prop for Oshun photoshoots. Unfortunately our budget doesn’t run to that, but we found some really good alternatives….. 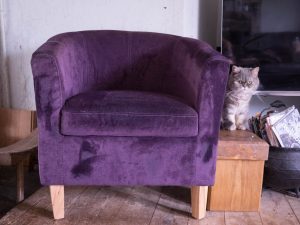 To begin with, we bought this cheap and very cheerful purple chenille tub chair online from the Sue Ryder charity. It’s ideal as it’s lightweight so easy to move so Jude (who has commandeered that one as purple is her favourite colour), can pick it up to the other side of the room and turn it round to watch the telly with us. We were in luck to find such a light weighted chair. But if you have difficulty in lifting and moving stuff around, contact a moving company on their website, like the BigTMovers.com. I was nervous about the purple, as the decoration in the living room is generally pale and muted or brown, but I was convinced by the rest of the family that a pop of colour would be a good thing. So that it doesn’t look so alone, the purple velvet cushion covers that normally only come out at Christmas, are hanging about on the settee and other chair. We now have what is commonly (and slightly pretentiously?) in the world of home decorating, called an accent colour!

Sue Ryder aren’t selling the chair any more, but here’s one very similar: 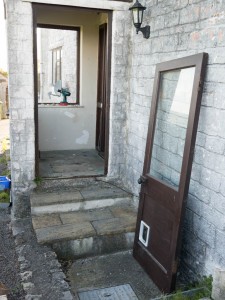 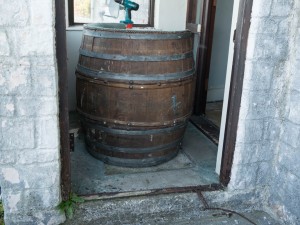 by the side of the fire, but when looking on ebay for vintage furniture for sale near us, I came across this one, that we decided we absolutely had to have! It has such an interesting history and I bet the guy we bought it from has a few tales to tell too! He was in the airforce and based in Africa where barrels were used to keep horrendous locally brewed beer. His wife worked at a furniture company, so they decided to cut up and upholster one of them. When they moved back to England, they shipped it back with them, and five years ago it was re-upholstered and renewed. 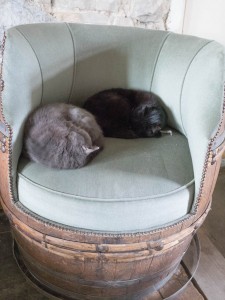 Cats on the barrel chair

We won it for an absolutely bargain price, which makes it even better! However, I had thought the fabric looked blue in the pictures, but has turned out to be more of a green, which is a bit of a shame, but the tone blends into the colour of our pale blue walls, so I think we can get away with it. There was one other small problem: when we heaved it out the car and stood it in front of the door, we realised it didn’t fit! So, two doors off their hinges and much back-ache later, we’d shifted it into its new position.
The barrel chair has turned out to be very comfortable and looks even cooler, so we’re very happy with that purchase.

The next item to find was a dog bed. Our Neapolitan Mastiff, Loki, was used to lying on his side of the big curved settee most of the time. We couldn’t get rid of that until we bought him somewhere else to go. I did not want him on the two-seater leather settee and spoiling that as well. So we found this one, which is humungous and as the kids often comment (they want another one), we could fit two dogs in it. It does allow him to stretch out and get comfy though, which is good. Apart from the fact that it has ‘Knuffelwuff’ on the front, which sold it to us in the first place; it’s also well cushioned, has a washable cover and has the raised sides for him to rest his heavy head. Don’t tell Loki it’s a dog bed. We’ve just pretended it’s a giant cushion we sit in occasionally and as I type, one week after it arrived, his suspicions of it have gone and he has started lying in it without encouragement needed! 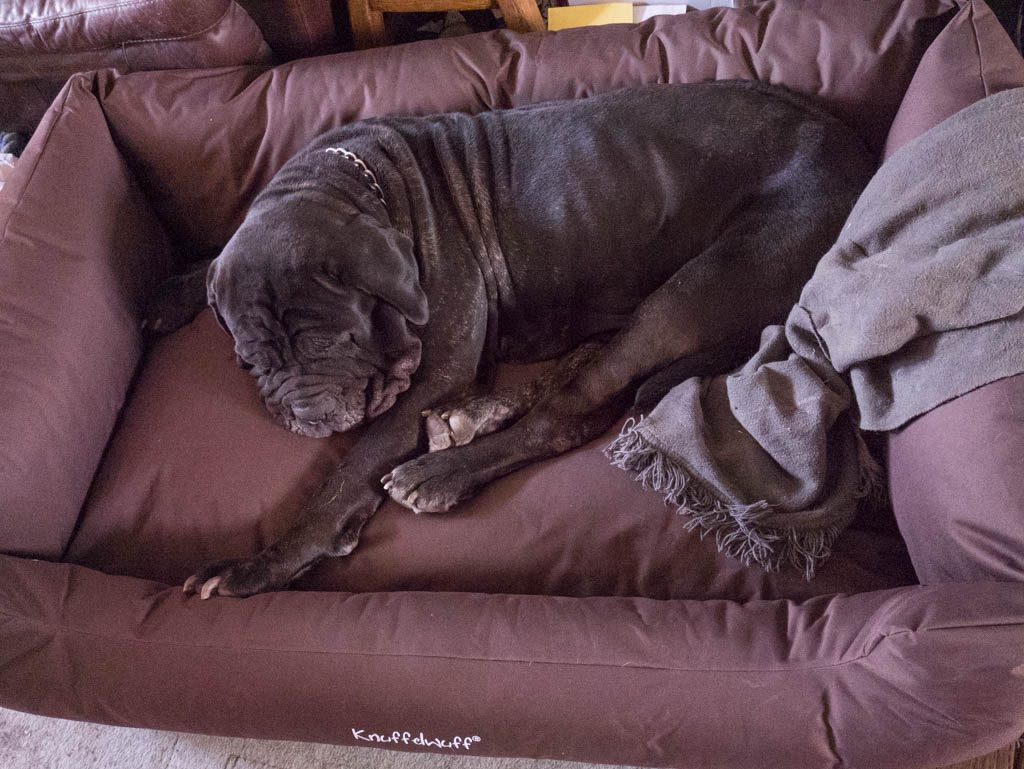 Ok, I’ll be honest, everything I’ve written so far has been sitting in my Drafts list since May, waiting for me to take photos when the living room is tidy. It’s taken this long for that to happen! So this is now two updates in one really. We’ve since managed to get rid of the settee through Freecycle. The new owners 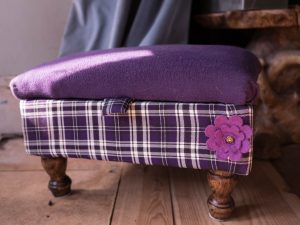 are either going to clean off the dog slobber or just re-upholster some of it.

I bought this purple footstool from ebay, which turned out to be half the size I expected it to be! I did look at measurements, but in real life it’s never quite the same! I’m not entirely sure the style is us either, but it was cheap enough to keep as a temporary measure for guests to perch on when we have too many people for other seats. 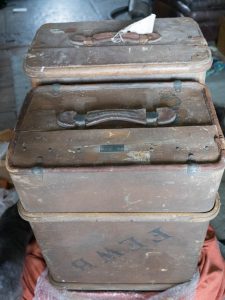 Without the gap behind the settee where it was before, we needed somewhere to keep some of the crap! So I was lucky again on ebay and bought these two trunks for £20 together! I’m not very good at throwing away expensive magazines, so I thought the one underneath could be to store those, and the one on top for the pet toys and dog towels. Someone said to Rain recently, “Is it true you keep towels around the house to wipe up the dog slobber?” Haha! Well yes it is true! (#NeopolitanMastiffProblems) Though when they’ve been through the washing machine, they need somewhere handy to go. 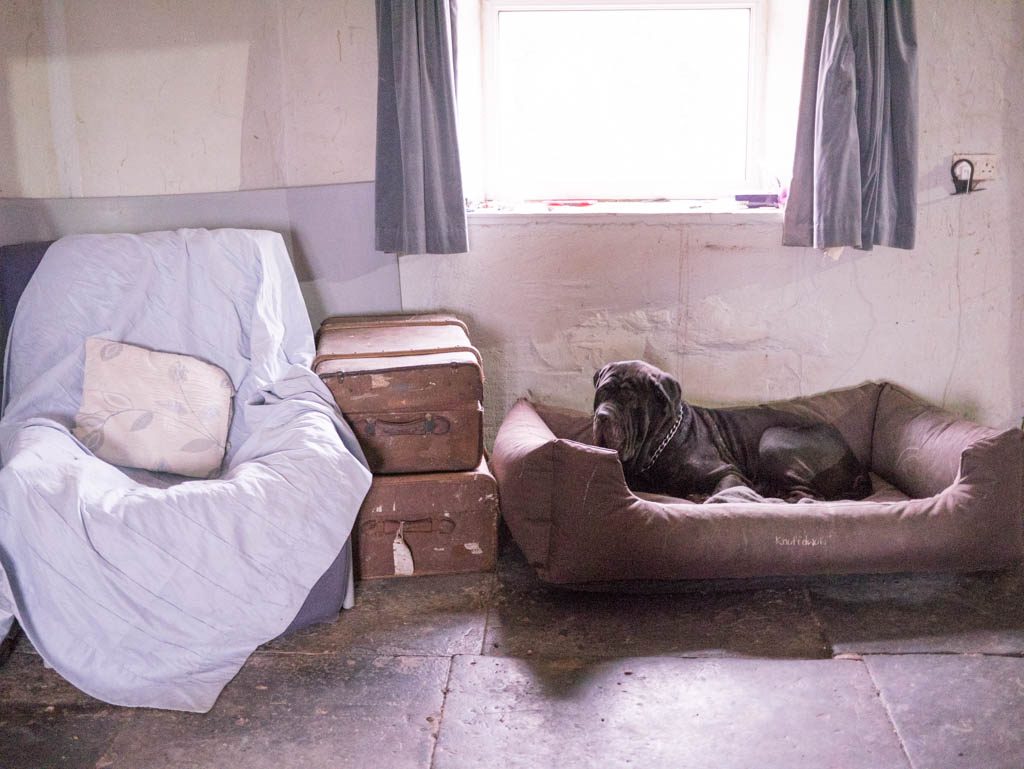 Where the big settee used to be

We have a bit of a conundrum about the chair that’s planned for the end of the room where bookshelves will eventually be added. Chris wants a chair like my parents have: those comfy leather-covered 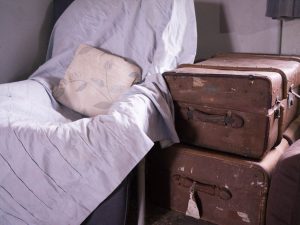 chairs with a round wooden base that slightly rock backwards and usually come with a footstool. No offence meant to my parents, but I’m not personally keen on the style – we’re just not old enough to be that practical yet! Jude really wants a wooden rocking chair, which I like the idea of, but let’s face it, they aren’t the most comfortable are they? So to be getting on with, I washed off a chair we bought from Ikea twenty years ago and has been sitting in the garage since we bought the leather settee when we moved here. It’s too modern for our taste now really, and there’s a great big rip in the cover, so needs a throw over it permanently, but I think we can get away with it until we find the perfect chair. 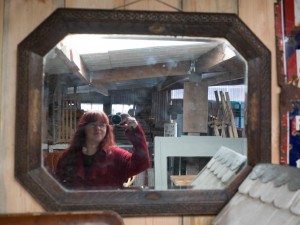 A new old mirror is up on the wall over the fireplace. Despite it seeming fine when I looked at it at the reclamation yard – I honestly must have stood still in a sweet spot, because back home it’s like a snapchat filter! (It entertained Jude’s friends the other day for ages!) There are weird lines all the way across which makes it no good at all as a mirror to actually see your reflection at all accurately, but does work in bouncing light back into the room. I’m pleased with the find actually, as it’s just the right size and I like the plain, but not too plain wooden frame. Also, flowers on the mantlepiece now look so much better than they did against a stone wall. Previously, no matter what colour flowers, they’d just somehow blend into the shades of the lias limestone. 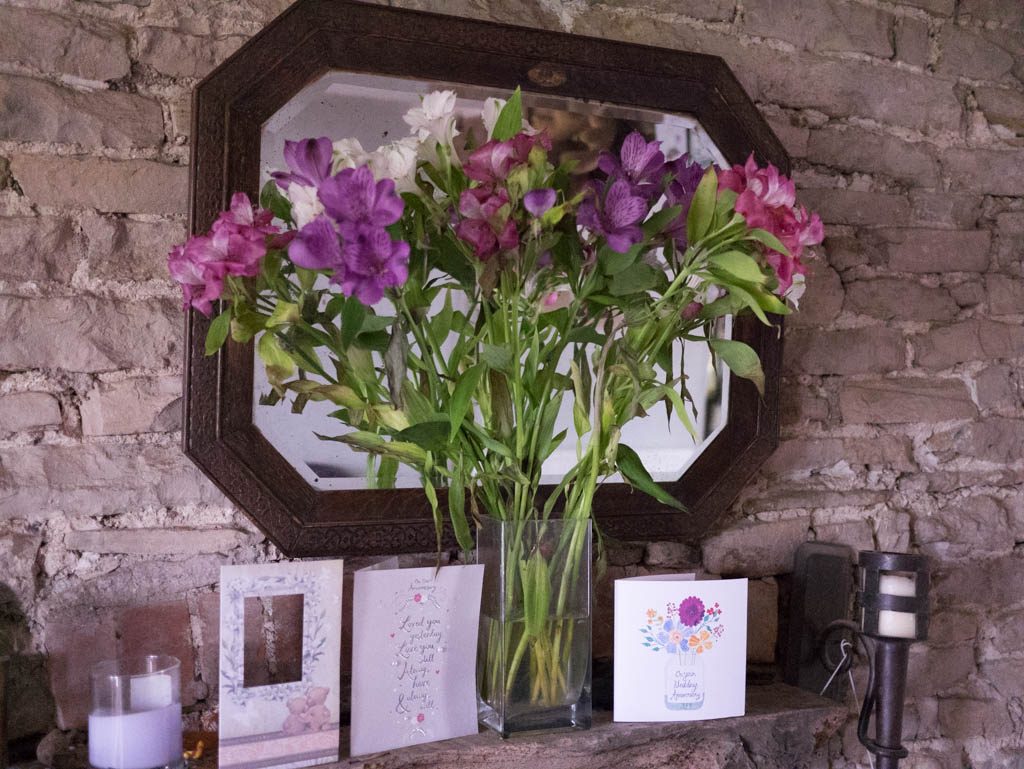 Ok, well that’s it for now. We have a mix of modern and vintage furniture and reclaimed decor. I’m still trying to sneak in a bit more shabby chic style without Chris noticing! Our next plans for the room are to wax the new pine floor boards to blend them in with the old elm a bit better. And get a piece of wood or slate for a window sill. Oh and we do have to do something about the fact that the plaster on the ceiling is falling down! Let me know if you’re renovating or doing up a room – all tips welcome!

Weekly Wardrobe – What to wear to an afternoon teaparty

My strange relationship with fashion