Yes, this is a blog post about dog food! Natural grain-free food and treats from an online pet shop. 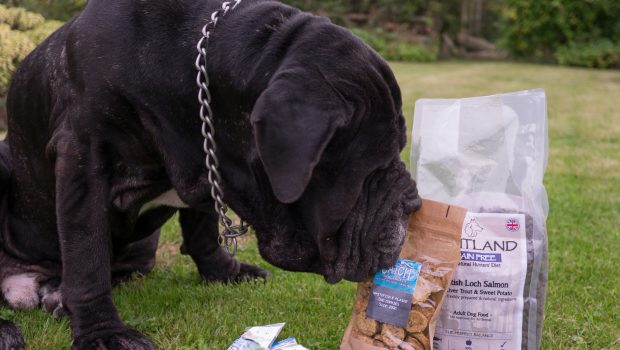 Loki has become the star of the show in several of my YouTube videos. He also commands attention whenever we take him anywhere; we love him to bits, but he can also be a bit embarrassing! He slobbers on everyone; bumps into them; accidentally knocks small children over and even when we meet people who are perfectly fine with all that, he will never take a treat from them. When family buy him expensive treats at Christmas, they’re lucky if they get a sniff. Even at the Pylle Happy Landings dog show, he wouldn’t take the free samples of handmade dog treats offered to him. He just isn’t interested. As a puppy we had to train him with cheap sausages and pieces of cheese – not the easiest of foodstuffs to take about with you. So when PetShop sent me a box of dog goodies to review, I didn’t hold out much hope….

(All the links in this blog post will take you to petshop.co.uk where you’ll be able to see more details about the items I’m talking about.) 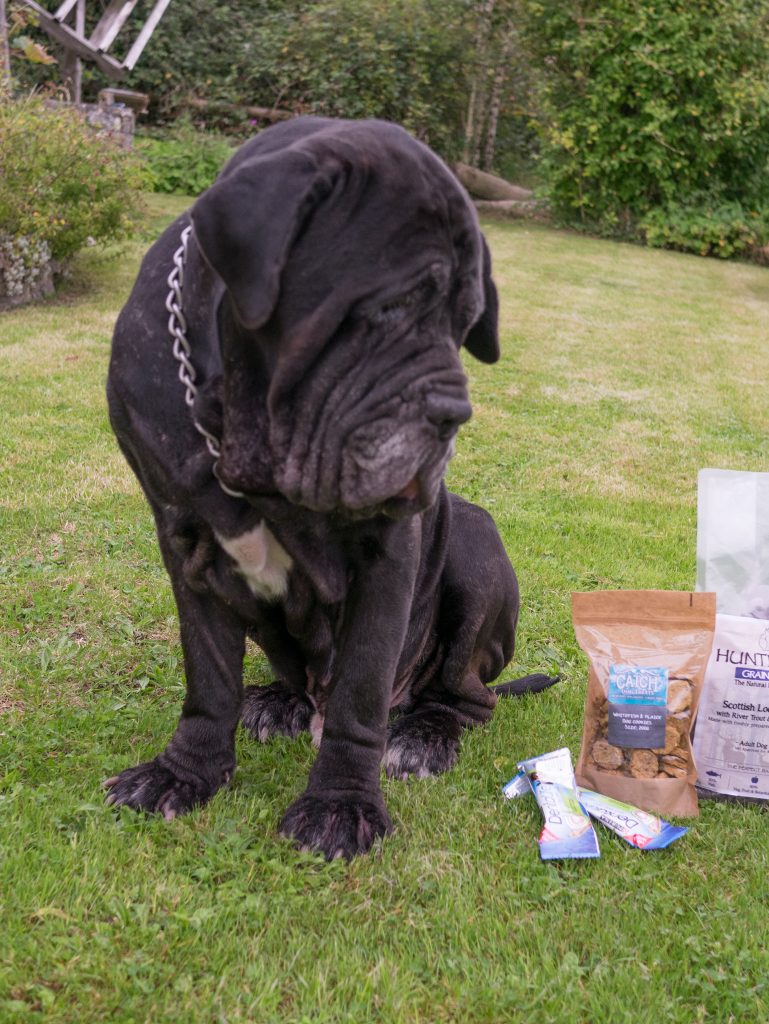 It was really exciting receiving the box in the post and not knowing what we’d find inside. It also felt like Loki was a bit of a celebrity! Although I couldn’t smell anything, he could obviously tell that he was going to be interested in what was inside those packets we managed to get him to pose next to. And yes, he absolutely loved the dog food. It’s a dry biscuit dog food from a brand called Huntland, and the flavour Loki tried was Scottish Loch salmon with river trout and sweet potato. I know some people are concerned about the stuff that’s used to bulk out dog food, such as cereals, but this one is a completely natural grain-free dog food. The ingredients are literally a 50/50 split between fish, and vegetables, fruit and botanicals. 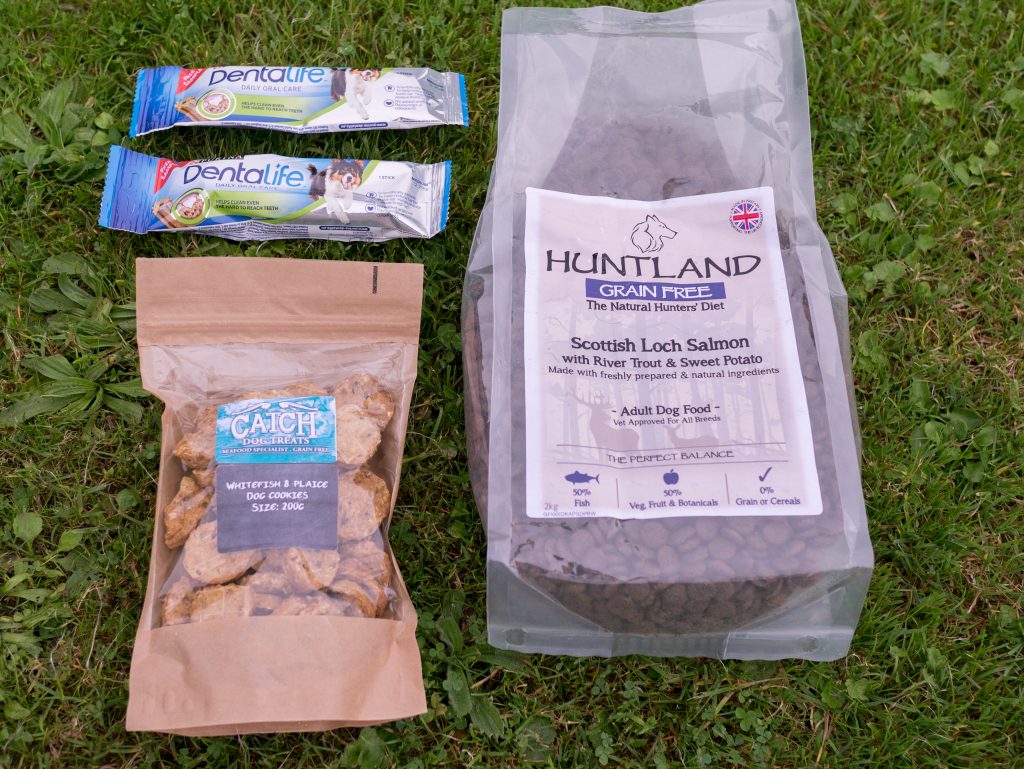 The packet of dog treats was a surprising and unexpected triumph. Loki can’t get enough of them, and are particularly good at getting him to do as he’s told! I wish we’d had these when he was younger and we were training him, as they are much easier to take about than mushed up bits of sausage! Still, it’s not too late, and you can teach an old dog new tricks when you’ve got these up your sleeve! These are ‘Catch’ natural dog treats, and again have fish as the meat ingredient, so we now know what it is Loki likes! There’s a sticker on the back of the packet that tells you the Ingredients (whitefish, plaice, potato and vitamin E) and a guaranteed nutrition analysis. When your pet’s health is important, this information is all really good to know.

The Purina Dentalife daily oral care sample did not go down so well sadly. The stick designed to clean his teeth remained on the kitchen floor until we eventually had to throw it away. Loki’s fussiness returned! He’s been brought up on Tesco dental sticks and doesn’t want to deviate! He was given the Pedigree Chum ones when we were on holiday and he didn’t like those either. So I gave the second one to our neighbour’s dog and he loved it! I’ve honestly never met a dog as fussy as ours. Still, I’m glad that the other one went to an appreciative home, and two out of the three new things for Loki to try were a remarkable success. 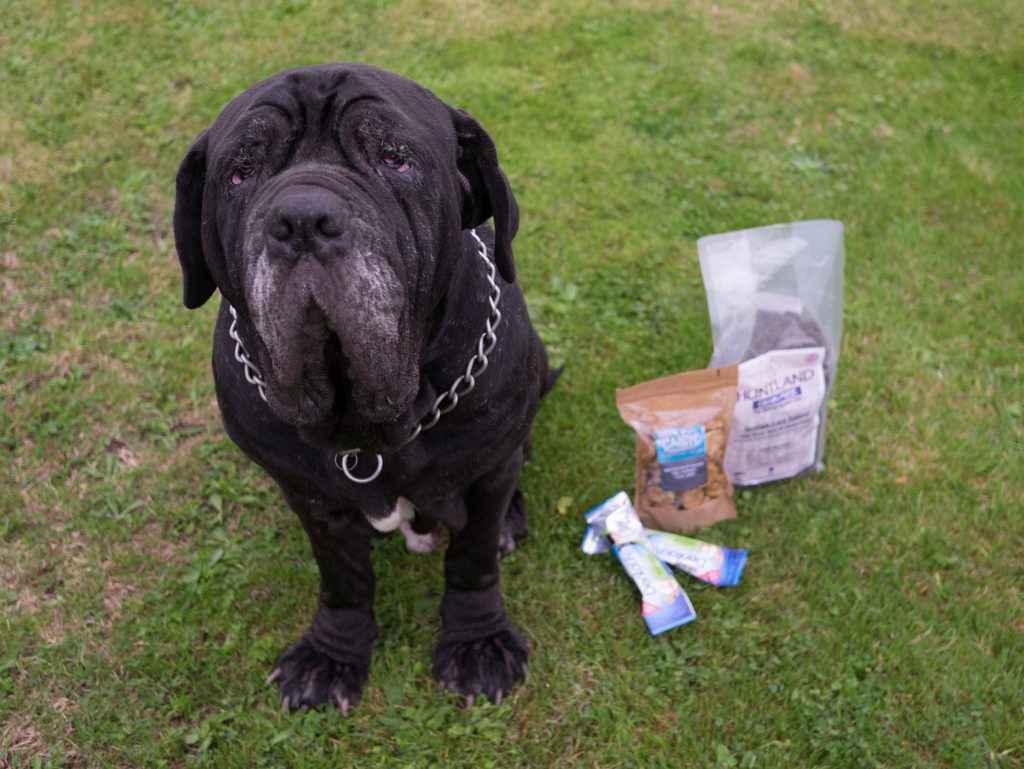 I hadn’t really thought about buying online pet supplies before, but on having a look around the petshop.co.uk website, there is a huge amount of choice there, and it’s so convenient for for it all to arrive on your doorstep. It isn’t just online dog food either, you can buy anything from fish tanks, to bird medicines, and for this time of year there’s a handy reflective section to keep your pet safe in the dark. I was genuinely impressed with the design of the Petshop website and how easy it is to find anything you might be looking for. I’ll certainly be using it again, so I hope this post has helped if you’ve got little furry loved-ones in your family!

If you’d like to see me setting Loki up for these photos and trying out the dog cookies, I filmed it as part of my Weekly Vlog, from 14:24…..

*The dog food and treats were a gift in exchange for an honest review. All words and opinions are my own.

Styling cream and khaki and enjoying a warm day!