A visit to Basildon Park near Reading. Places to visit near the M4 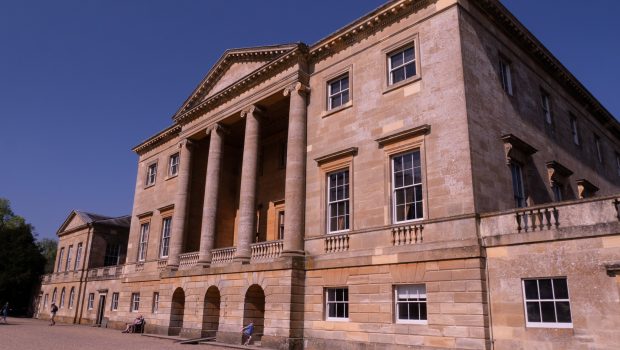 Last week we actually had a taster of a social life and drove all the way to London for a friend’s birthday barbecue. I was a lovely weekend, and it was so nice to go to a party and chat to old friends and meet new people. If you know me, then you’ll know this is a bit out of my comfort zone, but I think I managed not to panic and say anything stupid! Anyway, instead of the usual A303 route back to Somerset, we decided to take a slower route beginning with the M4 and then detouring through the English countryside. We stopped for a while at the National Trust property near Reading; Basildon Park…..

Basildon Park was built in the late eighteenth century, but after being requisitioned through both world wars, the house became completely derelict until restored in the nineteen fifties. Knowing this, I wasn’t sure what to expect. We recently visited Barrington Court in Somerset, which was also restored in more recent times after a period of neglect, and rather than furnish it with items from its original history, the rooms are left bare. However, at Basildon park Lord and Lady Iliffe brought the house back to life with antique furniture, and almost all rooms are open to the public. 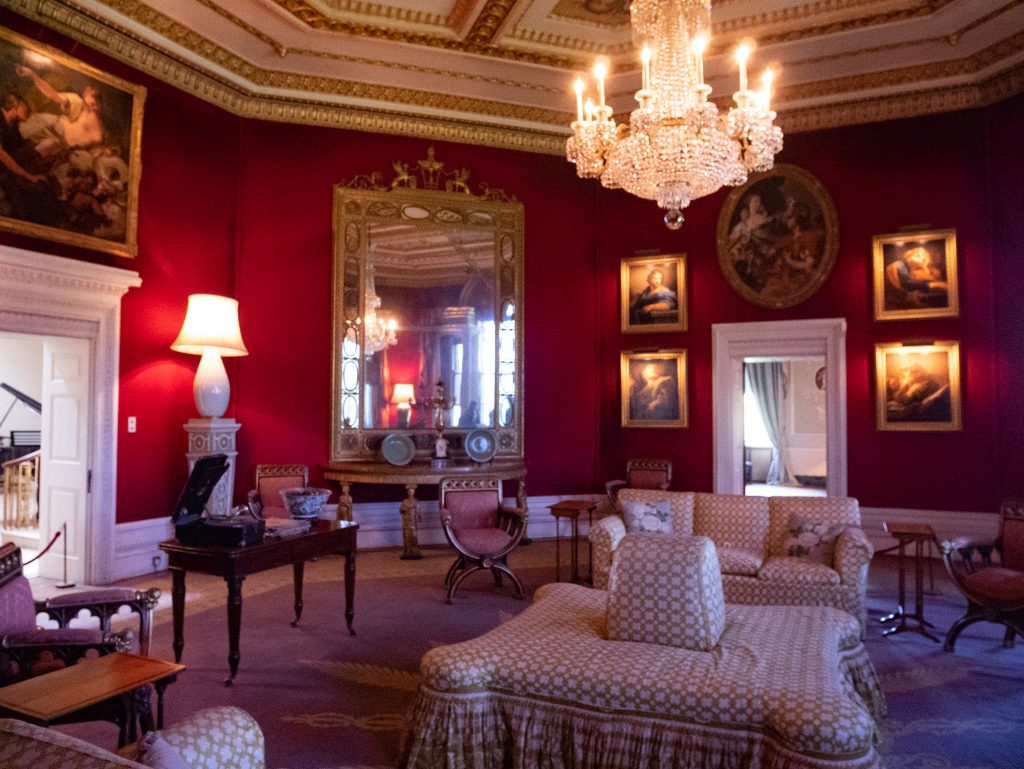 It’s quite different to most National Trust stately homes as it’s very bright and airy. So although there are grand four poster beds and ornate furniture, the walls and floors are painted or carpeted in lighter colours than usual. I wore a pale beige dress expecting to stand out in photos against dark wooden panelling, but that didn’t quite work out here! 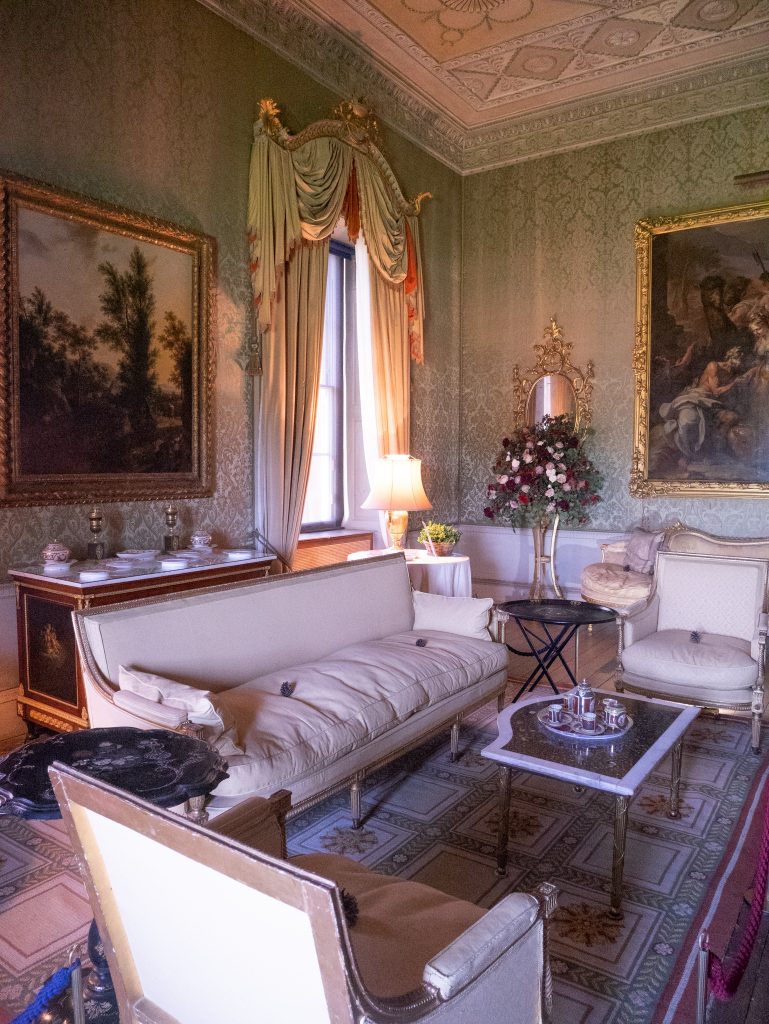 The shell room was amazing. I would have liked to stay longer in each room and find out more about them, but being such a lovely day, we wanted to be back outside. Also, we were pretty tired and keen to get home to bed! (As it turned out, Basildon Park closed at five, and we only just finished looking round, so it was a good job we didn’t take longer!) I’m sure we’ll visit again another time. Anyway, it must have taken someone a very long time to collect and glue on all those shells! You didn’t notice all of them at first; you’d be looking at the shell display in the cabinet, and then later realise that the whole cabinet is also covered in shells! 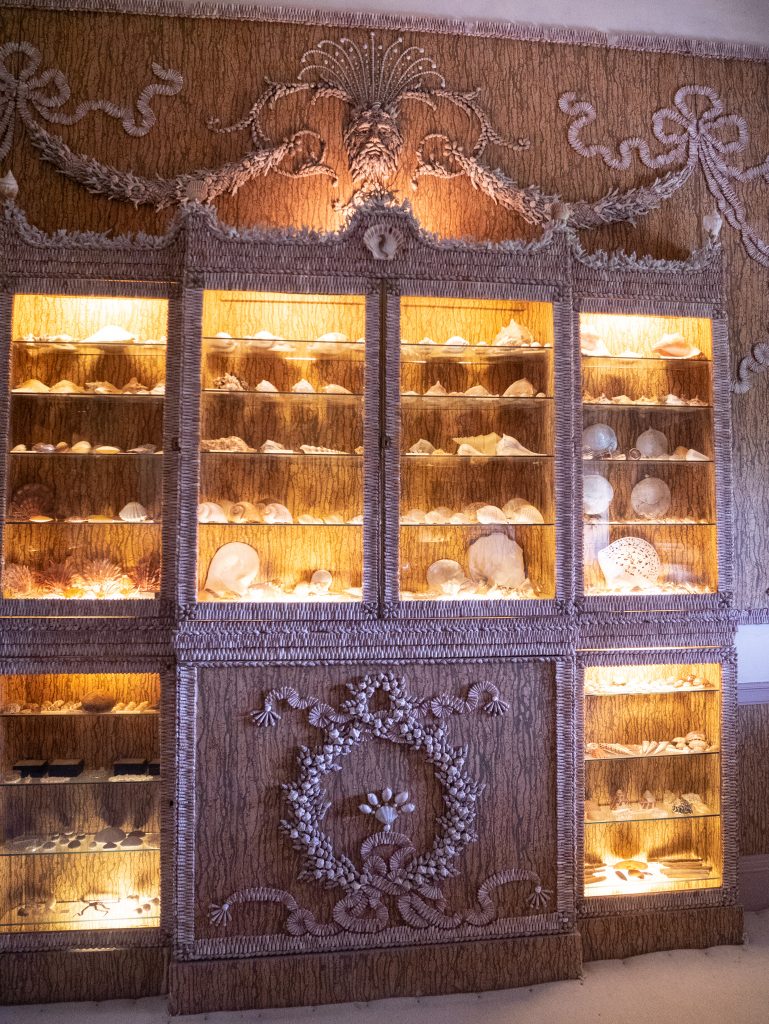 If you’re a Downton Abbey fan, then you might like to know that Basildon Park was the filming location for Grantham House, the Crawley family’s London residence. I love visiting television and film locations for things I’ve seen; I find it quite exciting for some reason! When I grow up, maybe I’ll stop being silly about that sort of thing! 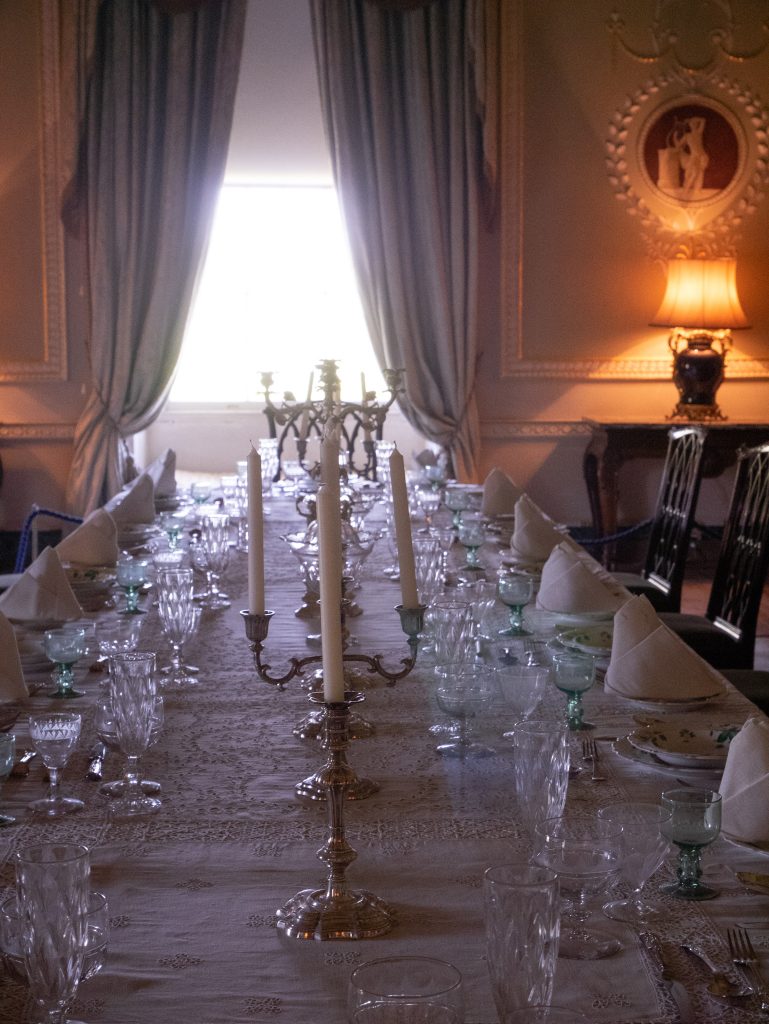 I also loved the nineteen fifties’ kitchen. I couldn’t believe that if you open the cupboards they are full of original food packaging; along with the first types of Kenwood mixers and a vacuum cleaner. Kids could play around with much of the cooking paraphernalia too, which they were loving! 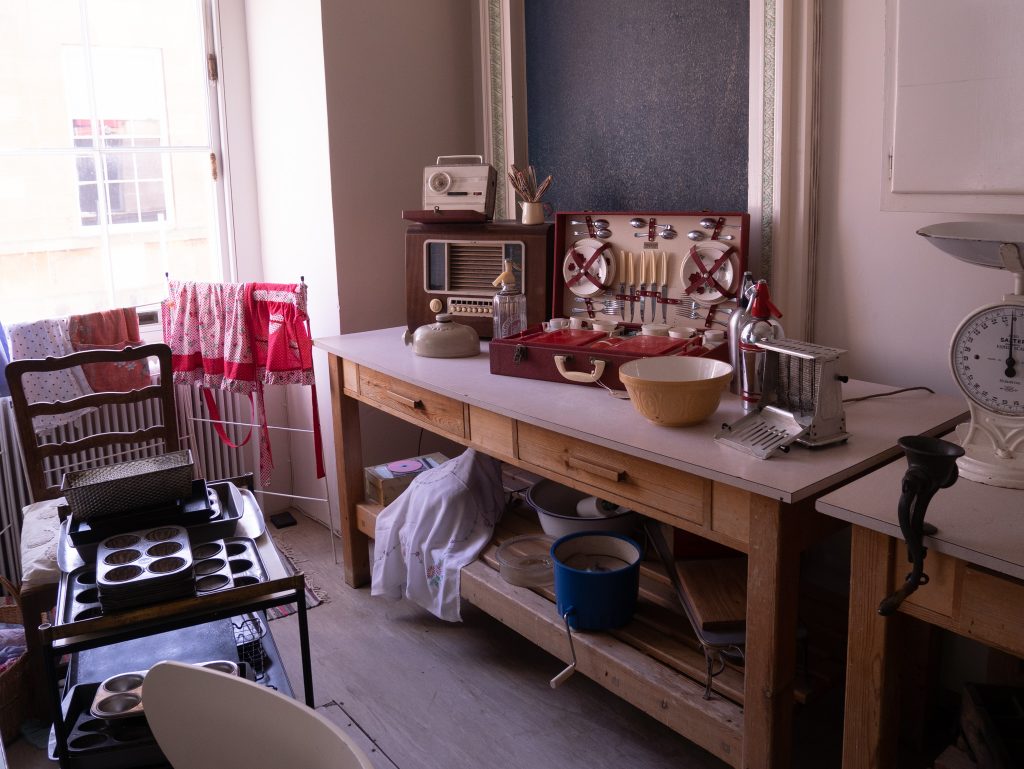 I really liked the feel of Basildon park and I’m really glad we stopped there on our way home on the M4! It would actually be a really good one to become a new National Trust member if you didn’t have parents who dragged you around the houses when you were younger! (That was before the National Trust became particularly child-friendly!) The house isn’t too big and overwhelming so if you’ve never really done this sort of thing before, it would ease you in gently whilst having plenty to see. 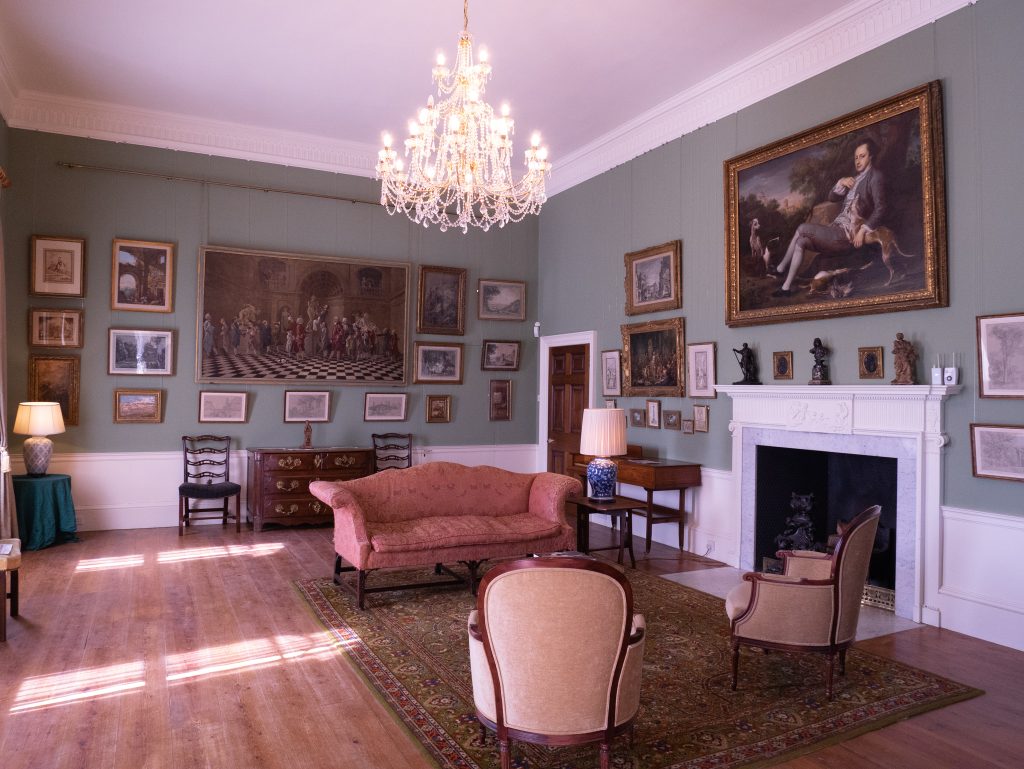 There was a tea-room where you could choose to sit in the old kitchen; inside a mural-covered room; or outside in the courtyard. We didn’t actually stop there this time as the queue was so long. It was bank holiday weekend, and it was pretty busy. Hats off to the staff and volunteers though, who were doing a great job in the heat in the car parks, and really knew their stuff for anyone asking questions around the house. Being about a forty minute car journey from West London, I’m surprised it wasn’t busier actually. I’d definitely recommend a visit to Basildon Park and we’ll definitely be going again to see more of the grounds. It looks like there’s a lovely woodland walk around the estate, and as dogs are allowed in (apart from the house obviously), I’d love to take Loki. 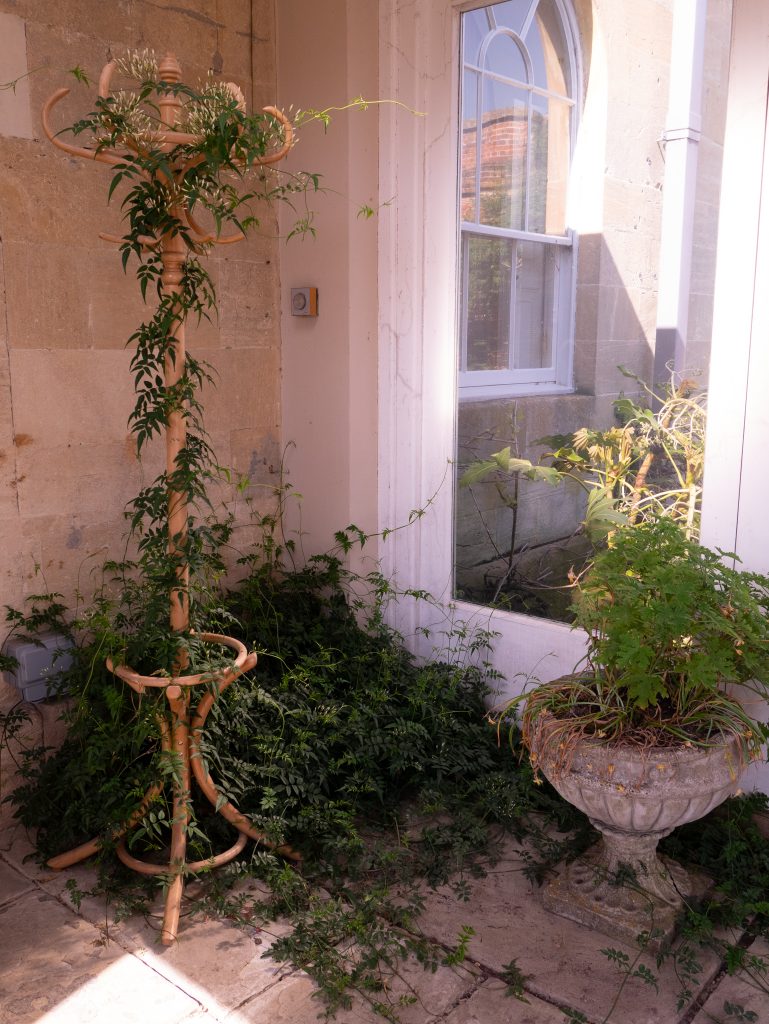 Here’s a gallery of the other photos I took around the grounds. There was a smallish garden at the back of the house, but it was mainly parkland surrounding the property. There were lots of flowers and blossom in bloom when we visited at the beginning of May so it’s a lovely time of year to plan a visit to Basildon Park.

Please come back next week when I will add the video I took when we looked around Basildon House. Or subscribe to my YouTube channel and please click the bell button so you’re notified when I upload a video, so you don’t miss it! 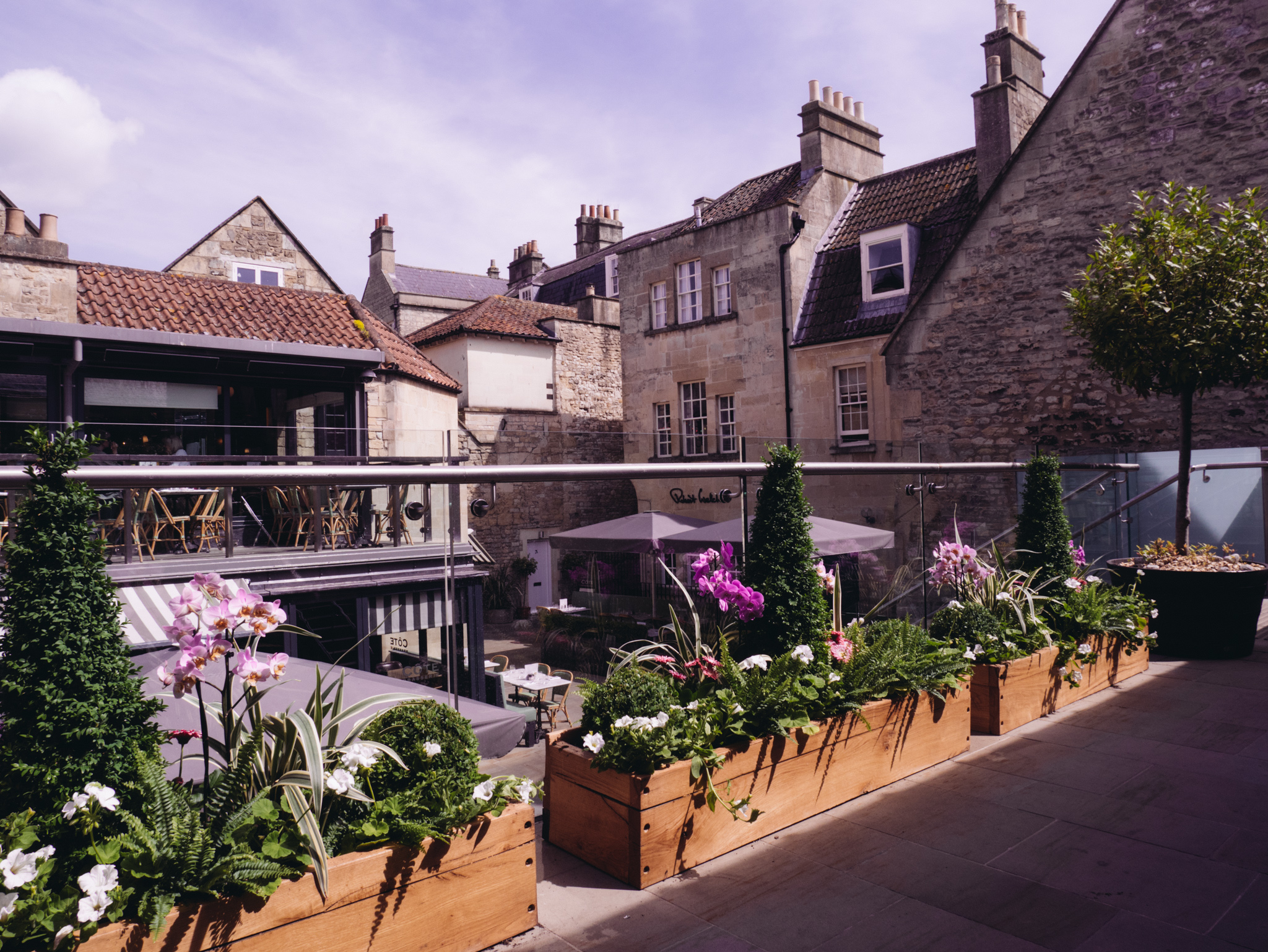 Looking for a car rental company in central Somerset? Review of KNW Self Drive in Wells

4 reasons why this is the perfect summer dress! A yellow dress from Marks and Spencer