Review of The Firebird by the Rogue Theatre Company in Cornwall 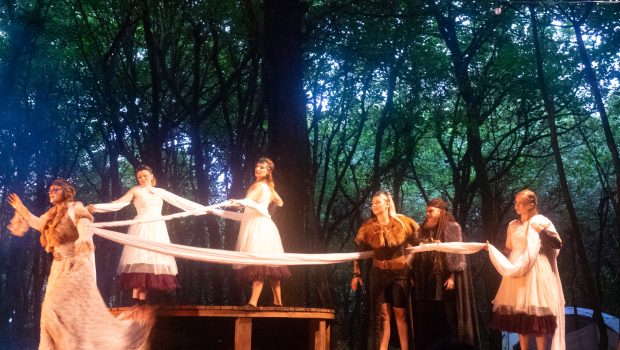 Imagine, if you will, being met by a fairy at the edge of magical woodland, and led down a secret pathway shaded by old twisted rowan and chattering leaves of beech, but lit by glinting lights strung through the branches. Each way you turn you’re met with strange and eerie settings of mysterious white princess bedrooms, strangely metallic baby clothes hanging on a line; gothic ravens adorning old books; abandoned tea parties disturbingly strewn with red; and odd antique paintings foreseeing the future; each with its character singing, dancing or otherwise performing as you pass. And that’s just the beginning….. 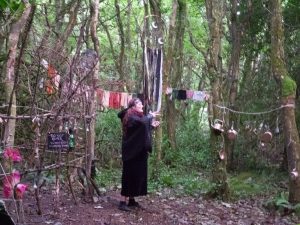 Would it be too much information if I said that it was an urgent need for the loo that led us past the sign for The Firebird by the Rogue Theatre company? As we left our overnight stop, I was too busy clutching my painful stomach when we hurried past Tehidy woods in the camper van to take much notice. But Chris noticed; looked it up a little later, and booked us tickets as a surprise. It was a dreary drizzly Sunday and we spent most of it looking out to mist and sea and the wind lashing rain on the windows at Godrevy beach. When Chris eventually told me, it was lovely to have a bit of entertainment to look forward to in the evening. He assured me the weather was going to clear up by then; and sure enough, it did!

I attempted to describe the magical entrance to the show, but really you have to go to experience it for yourself. The 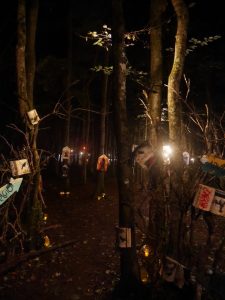 fairytale art installations were amazing, I wish I’d had longer to look at them and take photos whilst it was still daylight, but the crowds were ushered on, and we were worried we’d miss out on a hay-bale to sit on. (We needn’t have worried). I went back during the interval for photos, but the sun had well and truly set by then. But really, that would have been an exhibition worth seeing by itself!

I’ve seen outdoor theatre before – mostly at National Trust properties and mostly as a treat from my Mum for the kids when they were younger. They varied in talent and quality, but this show beat them all by far. (I am wracked with guilt that we saw Firebird without them – Rain and Jude would have LOVED it!) We’ve also seen small groups perform shows with a similar sort-of theme or set-up (though on a much smaller scale) at Glastonbury Festival, and frankly, some of them have been a bit shit. So in all honesty, even though I was going fully prepared to enjoy myself no matter what; my expectations certainly did not match just how blimming good Firebird by the Rogue Theatre company turned out to be. My only annoyance is that I didn’t see the show until a few days ago and this is the first chance I’ve had to 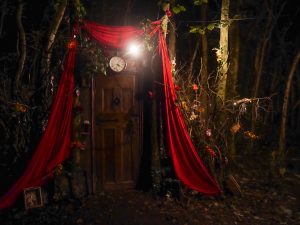 write the review with only two more days for you to go and see it! Seriously, if you are going to be in Cornwall on the 1st or 2nd of September, then book your tickets now! If not, then hopefully this blog post will convince you to see whatever show they’re putting on next. From what I can gather from the Rogue Theatre Company’s website, they’ve been performing regularly in Tehidy Woods, near Redruth and Portreath, for a couple of years, so I’m hopeful I will be able to catch next summer’s show, or possibly something sooner (if we get the camper door fixed in time. It fell off while I was unpacking yesterday.)

So anyway, Firebird is the telling of an ancient dark tale, which is fair to say is not the cheeriest of them all. Prince and Princess living happily ever after it is not. However, it is told brilliantly with a varied pace of acting, dancing, singing and other things not easy to describe thrown in. It’s a very professional production made all the more polished and atmospheric by the live music throughout. I wish I could credit the singer’s name with the beautiful voice. (Rogue theatre, please sort out a cast list on your website. Thank you.) The plot went a little AWOL in the second half and I wonder if the writer, Ollie Oakenshield was a little too ambitious in fitting in all the complicated back story and could’ve been simplified a little, but it was all very cleverly directed by Angelina Boscarelli. I particularly loved the women warriors charging with flames through the woods behind us! And the full circle (trying not to give too much away here) was perfect.

If you haven’t gathered by now, I loved the show, Firebird and highly recommend it. They also do a day-time show called 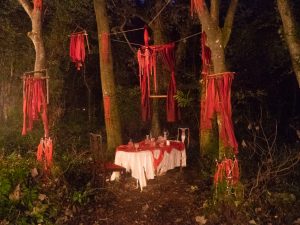 Wild, which I think is more family friendly. (By the way, there were plenty of kids watching this performance of Firebird, and unless you’re sensitive to a couple of swearwords it is fine for older children and they will be entertained though they might not properly understand all of it.)

Practical information: There was a drink and snack bar, and veggie soup cooked over a fire in a cauldron in the interval. I’d only just eaten or I definitely would’ve tried some of that! There were also clean compost loos nearby. There were enough hay bales to sit on, but I would recommend bringing a cushion as they can feel quite hard after a while! Couldn’t complain because there was a lady sitting on an aerial hoop for most of the first half and I expect that was quite uncomfortable too! We brought blankets, but didn’t really need them. They’d put a canopy up just in case it rained again, and I expect that kept the warmth in, otherwise you’d probably at least want a thick jumper! 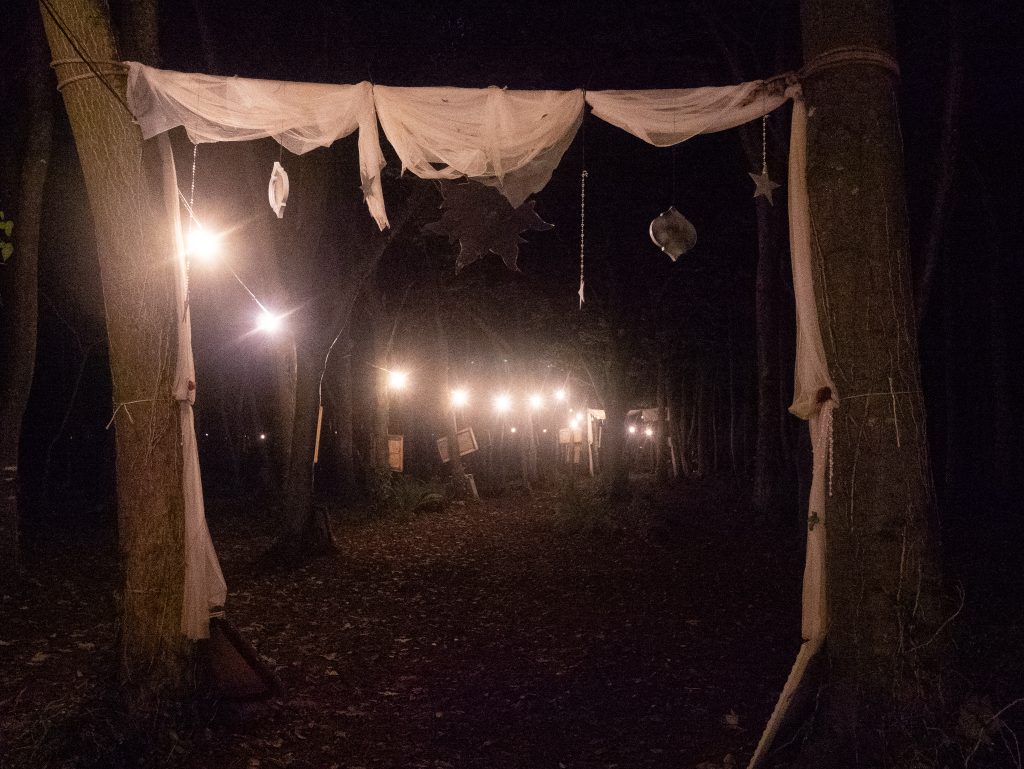 Oh, and as a side-note I really appreciate them not making a joke of the guy in a tutu dancing (even though some of the audience thought it was meant to be at first). (Maybe it was? Maybe I’m misreading it, but I don’t think so.) I always feel uncomfortable when I’m watching a show and they bring out a cross-dressing man as “comedy” and messing things up. So I’m glad this theatre company is going some way to ending this out-dated sort of thing. There was a guy in a tutu dancing with the girls. And that’s it. No big deal. Perfect. 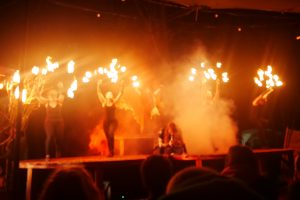 And whilst we’ve ventured slightly into politics/ethics, there was a very strong feminist message to the story, but also successfully accomplished in a not-in-your-face sort-of way that can put people off the message. Another thing very well done.

By the way, sorry that I’ve peculiarly put up two theatre reviews in a row. The Book of Mormon on Broadway is hardly comparable to this, but it is rather bizarre that a couple of weeks ago we watched a show with tickets upwards of a hundred and fifty US dollars (kindly gifted to us) and last weekend were given just as much entertainment for Eight pounds fifty each. I commend their goal in wanting theatre accessible for all and I hope it is enough for it to be successful for them. There is an option to pay £10 if you wish, or even buy a ticket for a stranger. I love it! Rogue Theatre – if you’re reading this – I suggest a Tips jar or something? We’ll know next time we’ll pay the £10, but you don’t know that when you’re buying the tickets for the first time. No doubt this is the best value entertainment in Cornwall so if you’re looking for somewhere unique to visit; now you know!

The Book of Mormon musical review – on Broadway, New York

What to do when your photos don’t match your Instagram! (A black and white photography project)