My little tribute to Keith Flint 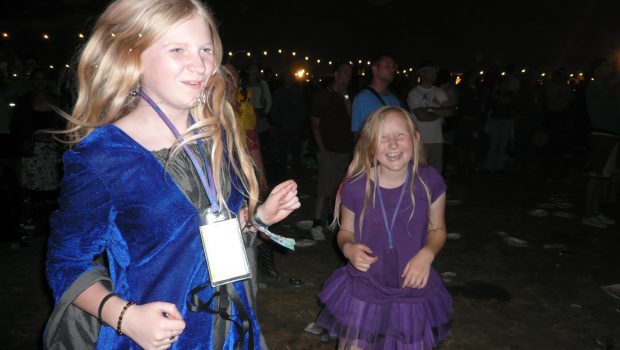 “You don’t know what you got till it’s gone.” It wasn’t until this morning’s awful news of Keith Flint’s death, that I realised quite what an impact he and The Prodigy have had on my life….

In 1993 there were only a handful of bands and singers that both Chris and I liked, and The Prodigy was one of them. So it’s not surprising that Experience and Music for the Jilted Generation were part of the soundtrack to our going out together days. (Though tbh there wasn’t a lot of actual going out.) His family had Sky, and I remember watching MTV in amazement at the skill of Keith managing to make shuffling about and half jumping look cool. I like to think that I’m a pretty good dancer, but no matter how hard I tried (and I did. Quite a bit.) I could not replicate those moves. Impressive stuff.

The photo above was taken in 2009 at Glastonbury Festival while we were all dancing along. It’s not surprising they grew up to be fans of The Prodigy as well. At six months pregnant with Rain, I was dancing like a loon at the NME stage – I vividly remember the moment Keith came out in that giant bubble thing! And at seven months pregnant with Jude a couple of years later, we were back at Glastonbury watching them again. Chris and I also saw them at other festivals in the nineties, V-Festival (don’t ask); and is it my imagination or were they at Reading as well? Without fail, they put on a good show.

Oh…actually I say that, but I’ve just found my review of The Prodigy at Glastonbury festival in 2009, and I wasn’t that complimentary! I also found that one of my first blog posts here was a review of Always Outnumbered, Never Outgunned, back in September 2004, if you fancy a look at that.

Keith Flint brought The Prodigy into it’s rock phase perfectly and I absolutely loved Fat of The Land. I bought a video of one of their live shows, and it was basically my daily work-out video! We couldn’t afford heating back then, so I’d smother the kids in blankets while I danced around the living room. It kept me warm for good couple of hours!!

Anyway; I just wanted to write something, because it turns out I’m really upset at the news; much more than I would’ve expected to be. But having thought about it, perhaps it isn’t so surprising. Even when you don’t know someone in real life; if their voice and their music is part of yours, it’s no wonder it’s sad to know that that voice won’t be singing/yelling to a beat any more.

Joining the #Sharealllinkup at Not Dressed as Lamb.

Monthly Memoir – a Somerset Wassail, visits to Dartmoor; the snow; the sun etc

Hi. Having watched a few of your videos about your Rayburn on You Tube, I have found your blog. You are an excellent lady to find. Thank you for all your inspiration.

I too was deeply and surprisingly sad about Keith Flint dying and wrote about it a little in a blog I was doing at the time. I think it’s because he was SO full of life and to think of him without life and clearly having felt at a loss with life is very hard. xx

Hi Victoria Lily, It’s such a shock isn’t is, with out-of-the blue unexpected awful news like that. And yes, it’s just utterly sad to think that Keith couldn’t face life any more. Such a shame.

Thank you for your lovely comment – I hope the Rayburn videos are proving useful. 🙂
Helen x