In defence of the clothing haul 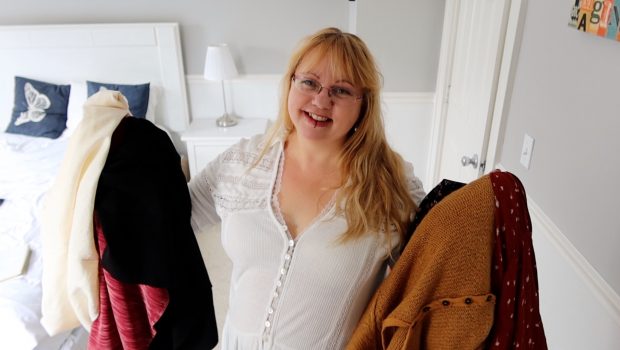 Oh I miss watching clothes hauls. I feel like the few have spoilt it for the many, like when the teacher at school says the whole class can’t go swimming because one kid was caught being naughty….

(I was going to say having a wee in the pool but I thought that was an analogy too far!) Some people just can’t handle their hauls; but how many of us is that exactly? Yes, the Sunday supplement may publish interviews with people who got into thousands of pounds of debt because they felt compelled to buy everything their favourite influencer showed them, but whose fault is that really? And if the buyer has that type of personality, I’m sure they’d have been buying everything shown to them in the advert break back in the day when people watched telly; or just bought the same items their friends had. And that’s the problem really isn’t it? Youtubers share their lives so they begin to feel like a friend to their viewers, and friends often like to emulate each others’ style. I’m sure many a psychologist could have fun unpacking the reasons why viewers like to copy the influencers, but I’m not qualified to go there (so I’ll just make amateur assumptions!)

Why do people copy YouTubers?

I just don’t get it! And maybe that’s because I’ve always had my own sense of style, and actually I hardly ever wanted to wear the same clothes my friends did; and maybe that’s why I don’t understand it?! Before the onslaught of articles about young people addicted to buying clothes, and before the Stacy Dooley documentary about the environmental impact of the clothing industry, I used to watch a haul video on YouTube at least every day (usually while eating breakfast.) I had a list of about ten reliable youtubers in my subscription box who I could go to to get my fix. And was it so that I could immediately click on their affiliate links to buy the same things? No! It was because I LOVE clothes. I love seeing what’s in the shops; what people are buying and how they are styling their outfits. It’s fun for me. When I was eighteen and as poor as a mouse, I watched Fashion TV daily to watch what was on the catwalks, knowing that I’d never be able to afford even the high-street rip-offs, but it never occurred to me to mind, because I just liked looking at the clothes.

Have I ever been influenced to buy something after watching a fashion haul? Yes, once. And it’s probably the most boring item of clothing I own – a plain khaki green skirt, but I bought it because I’d been on the look-out for a comfortable elasticated waisted skirt to wear with my black tops, and I trusted the youtuber to be telling the truth about it, and not just recommending something for the affiliate revenue. (That person by the way is the gorgeous Emma from Brummy Mummy of Two.) Now I don’t want to buff my halo here because I know for a fact I’d be buying more from those links if the clothes were more my kind of thing! But my style isn’t very mainstream, and the fashion youtubers I’ve come across either have a style that’s too young and trendy for my tastes, or are sophisticated, tailored and smart, or are in the Mum clique and are all about practicality for taking the kids to school. If I found a youtuber doing hauls from Joe Browns, Cabbages & Roses, Odd Molly, JDL clothing, Toast, Made in Italy and that kind of thing, I’d be glued to it with my mouse hovering over the links before they’d even had chance to try them on! BUT – and that’s the crucial BUT – I wouldn’t buy anything unless I absolutely loved it; would wear it over and over again for years to come, and I could afford it. (Most likely I’d see it on the youtuber and then take to ebay to see if I could get it 2nd hand for half the price.) 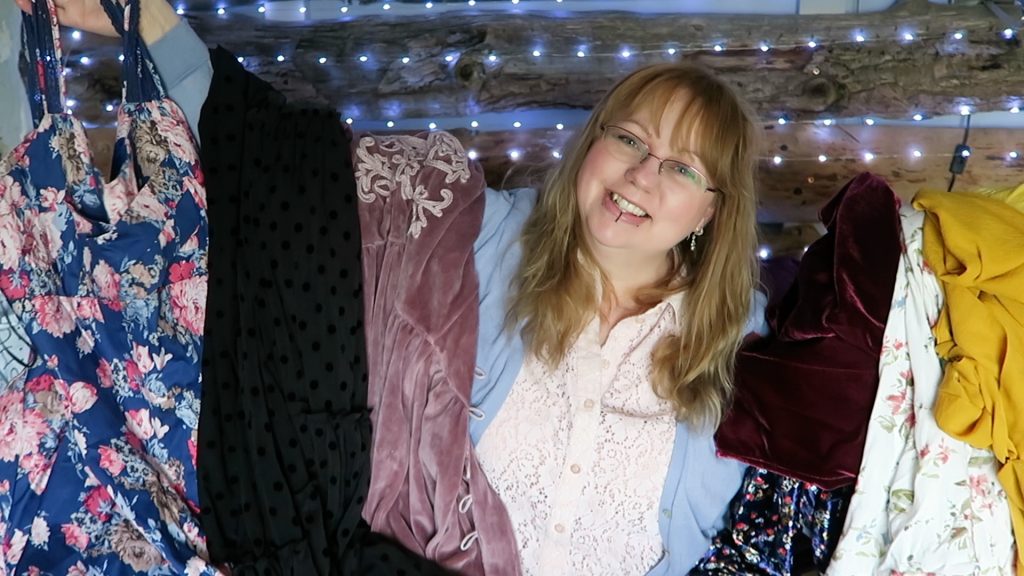 Are YouTubers to blame?

Yes, definitely. At least to a certain extent. I taught my kids that they are made to want the toys they saw in the Nickelodeon advert breaks because if we buy them, it will make the company rich. I taught them that the models in magazines have been photoshopped to look “perfect” so we go and buy the same make-up. I didn’t teach them, however, that their favourite youtubers will be trying to sell them stuff so that they can earn some money. And to begin with they weren’t at all honest about it, and often made their audience believe they were actually buying a whole load of clothes every week and not returning most of it. They didn’t mention when clothing had been gifted in exchange for the video, or even paid for by a brand. And the one thing a lot of them still aren’t mentioning is the 70% off discount vouchers that are sent to them by stores such as Top Shop and Asos.

They did deceive their audience by pretending they had endless amounts of wardrobe space and pots of money to buy it all, and I can imagine that to a teenager who doesn’t realise the business of being a youtuber, this is a lifestyle they think they can have as well.

(By the way, going on a slight tangent, it really irks me when people (be they youtuber or viewer) buy all the latest fashions just for the sake of it. These people don’t deserve all the nice clothes! Like the lottery winner who goes back to work, or a rich person who spends loads of money on fine wines and has no appreciation for its quality or flavour. Really LOVE your clothes people, or don’t buy it!)

The environmental impact of a fashion haul

I loved clothes before the internet existed, let alone YouTube, and I love clothes now, but there’s no doubt the YouTube fashion haul has had an impact on our shopping habits. It definitely feels like an everyday activity now, rather than something we did every now and then for a treat. However, I wonder if shops such as Primark with their super-low prices and super-low quality and constant turn-around of new styles are actually more to blame for the throw-away culture of trend-led clothing. That being said, the public want it, and the ‘What’s New In Primark’ videos are some of the most-watched videos out there. To help the environmental impact of fast fashion, we need to change what people want, and actually, I think that is slowly happening.

In defence of my fashion haul

The reason why I’m putting up this blog post today, and why I’m actually a bit nervous, is because I’m also posting a fashion haul on my YouTube channel. I went shopping while I was in America last October and I decided to share everything I bought because I love watching those kinds of videos. I can’t remember exactly, but there are around ten new items of clothing, which isn’t normal for one month’s worth of new clothes, but here’s why I think it’s ok:

The future of the fashion haul

A few months ago no-one dared to post a fashion haul for fear of all the anti-fashion vigilantes filling up their comment section with criticism. Sometimes things need to swing too far the other way before a balance can be found, and now, I’m starting to notice a few more haul videos coming back again. This time though, (particularly with all the new advertising rules) fashion youtubers are being much more honest about it. They usually begin each video with a disclaimer about how it is their job to show you what is in the shops at the moment and we, the audience, are not expected to go out and buy all of it. They are open about the fact they will be returning most items, and usually declare it if they have been gifted anything or are being paid to show it to us. It’s really no different than flicking through a fashion magazine, except we can see people style items their own way. I personally don’t see any harm in that, but we do need to teach our children to be cautious. A lot of people my age don’t watch youtube or understand how people make money on it, and we have to get savvy so we can pick up on when we’re being sold to, and pass that caution onto the next generation.

It’s a bit of a long one today, but I could talk about this topic for ages! There’s definitely more to be said on the fashion industry and the environment, but that will have to wait for another time! If you found this post interesting, please share with your friends. 🙂 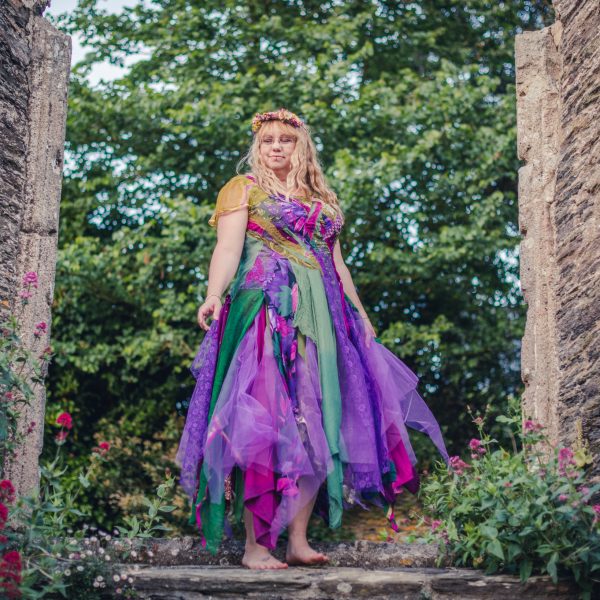 The story of the purple bohemian wedding dress
Finding the location of the photo-shoot for this bohemian wedding dress was one of those classic screech to a halt moments that don’t normally happen in real life. However, we’d just stopped at a nearby beach in Devon, hoping to find something to eat. Alas, we had no luck, so we just stretched our legs in the evening sun and walked along the shore-line for a bit… 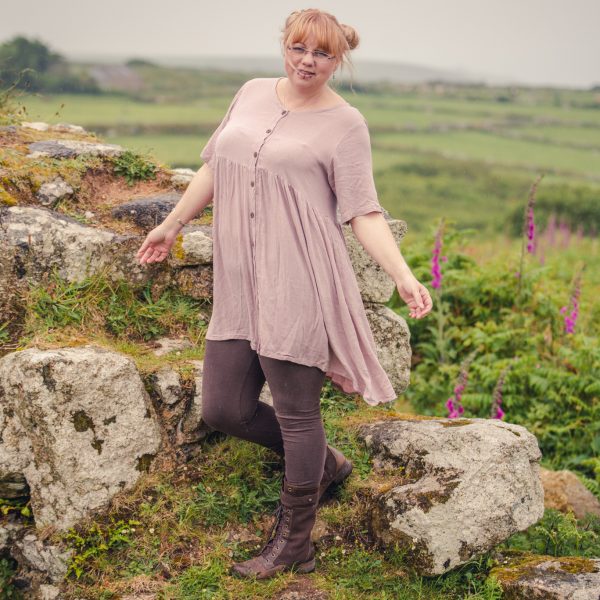 The freedom of a smock dress
Ok, let’s start off by being clear, the definition of a smock dress isn’t really represented in these photos! A smock dress really should have smocking – gathers of material in tight pleats – usually for decoration. A quick Google image search shows me I’m not the only one who thinks this style is called a smock dress though, so probably most of you will know what I’m getting at…. 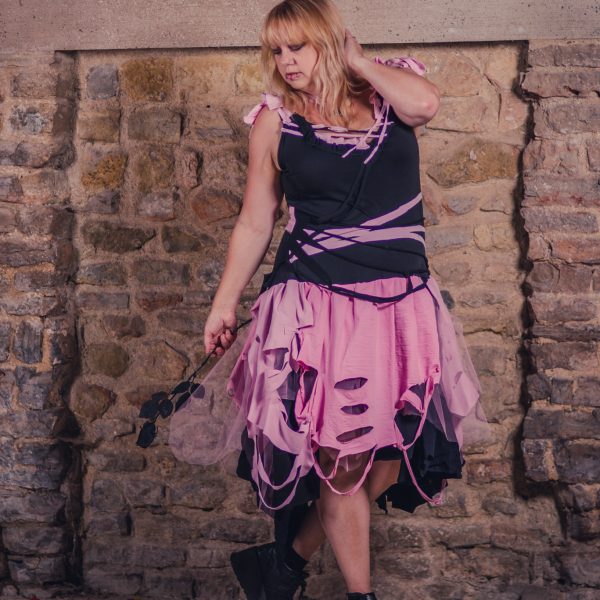