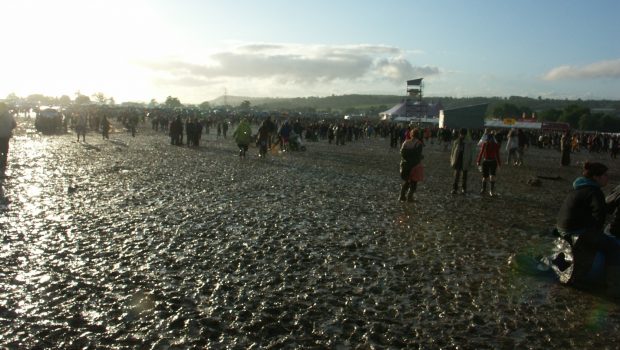 The Freaks and Faeries come out to play!
First of all; you’ve got to realise this review is going to be a bit biased, because I am a true Glastonbury fan. I first went in 1995 and would not and have not missed it ever since. If I could live like that all the time – I probably would. (Ok, I probably wouldn’t because you do like a bath after a while) but you get what I mean. I start preparing for it in January and by March every now and then I let out a sigh and go, “Glastonbreee!” And I’m on the message boards all year round looking at rumours about bands and weather.
So anyway, this year. For many others, the line-up was great, but for me, there wasn’t much I was interested in, so I was a bit disappointed about that. You either have to love the headliners, or be the sort of person who knows the bands no-one else has ever heard of. I’m sorry, but I like a bit of music that’s been in the charts recently, and there wasn’t much of that. There wasn’t even Rolf Harris this time. I’m backing the campaign to get him headlining next year!
So, I’ll do mini reviews of the bands that I did see, in the music section over the next few days: Nelly Furtado, Snow Patrol, Kings of Leon, Oasis, Chemical Brothers, Black eyed Peas, Paul McCartney, British Sea Power, English National Opera, Goldie Lookin Chain and Orbital.
In general, the festival itself was a brilliant one. I felt the safest yet – even in the car parks where I felt fine going back alone as there were security and police patrolling. Considering that in 2000 about 9 out of 10 tents were burgled, the change in this is amazing – I did not hear a single soul talking about their tent being rummaged through. And for the first time ever, my flag wasn’t nicked!!
The hassles and difficulty in getting tickets for Glastonbury this year, was a pain and a huge worry before the festival, but it meant the crowd were true Glastonbury nuts. You could tell everyone was there because they were dedicated to sitting on the phone pressing re-dial and typing in details on the website continuously through the night they came on sale. I think most of the Aloud fuck-ups were sorted out in the end, but it was truly stupid of them not to have prepared more phone lines and bandwidth.
The weather was bit of a pain in the arse on the Wednesday. The wind made our tent break, so we had to beg and borrow to sort out replacement little tents which were back-breaking to get in and out of; especially with mud up to your knees. But after that day it wasn’t too bad. We ran out of dry socks and trousers for the kids, and we got soaked once when we thought it wasn’t going to rain again; but lets face it, it was nothing in comparison to the mud baths of ’97 and ’98, so it was fine really.
My only other grumble is the car park situation on the Monday. We started queuing at midday and got out at 7:30 – not moving and inch until 6pm when the message finally got through that our field was stuck and they sent stewards over to sort it out. Thanks to Radio Avalon for keeping us alive!!
I haven’t really got the space here to try and describe the wonderful and unique atmosphere of Glastonbury. For that, I’d have to write a book – oh yes, I’ve done that! (Hopefully getting published soon). So now all I’ve got is a tonne of washing to do, mud to scrape off, glitter to shake off, transfer tattoos to peel off, and start counting down till next year. Can’t wait!!