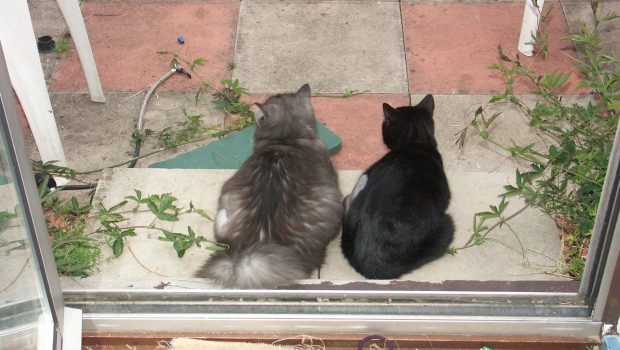 “The secret to happy cats” apparently. And is supposed to stop the little sh*ts weeing all over the house.

Feliway was my last resort – I’ve mainly been trying to avoid the expense of it, but I am at my wit’s end with my cat problem. I have a brother and sister who will not stop weeing around the house. They have their favourite spots, but they’re happy to do it anywhere really. I’ve tried lemon and vinegar splattered in the areas they like to go, but that doesn’t work. I bought a spray from the pet shop called Stop Griffes Chat, and that doesn’t work. Tin foil puts them off for a while, but they just go next to it – I can’t cover the entire house with tin foil! I clean their trays regularly – they have one enclosed one, and another open one. So I bought the recommended Feliway diffuser.

I bought it from ebay for £15, which is loads cheaper than from the vet, and it arrived yesterday. I can’t smell it at all, but the cats stopped to have a sniff. I plugged it in in the living room, right by one of their weeing spots. As usual, last night, I shut them in my study with the 2 trays, and their food and water. During the night one of them weed on the bag of paper recycling. I’ve started putting them outside staight away in the morning, because they’ve been known to go somewhere as soon as I let them out. So after half an hour of being in the garden, I let them in and go upstairs for about 10 minutes. I come down and one of them has weed about 30cm away from the feliway diffuser.

So much for that then. It seems my cats are in the 30% that Feliway doesn’t work for. Another waste of money. Any other suggestions would be welcomed!

The Venetian pirates bought her a palace to say thank you. #photosofafairytale What do you think she had done for them? @ Museo di Palazzo Mocenigo instagram.com/p/CCGo74XFS2Z/…

“Sing me a song of a lass that is gone; say, could that lass be I?...” #threadsofafairytale #outlander A very dramatic Outlander finale, and now it’s too long till the next series! Did you watch it? @ Glastonbury… instagram.com/p/CCGZwf4HZpD/…

Do you regret any lost friends? @ Lytes Cary instagram.com/p/CCEpJ-LHWUm/…

She set off on her journey wondering whether a magic spell had caused her to match the flowers... #photosofafairytale @ Appian Way, Rome instagram.com/p/CCEnhDdFDRB/…