Is it time to start making an effort? 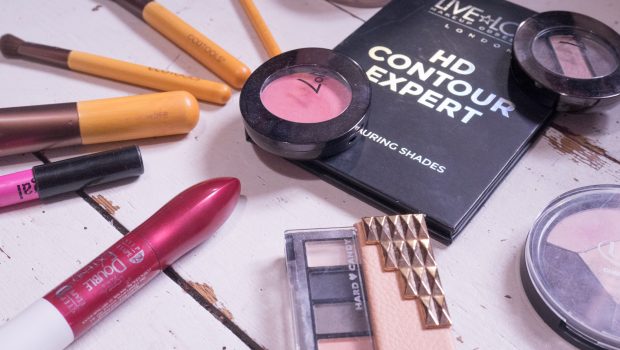 Fashion and Beauty are terms that generally go hand in hand, particularly when describing the genre for some bloggers. However, whilst I am always interested in what’s on the catwalk, I can’t honestly say I’m all that bothered about ‘beauty’. I like looking at the craftsmanship of couture clothing, but I’m not rushing out to buy the latest eyeshadow primer. I suppose my interest has increased in the last six months or so when I’ve started blogging and making You Tube videos and my image is out there a bit more; and it got me thinking about how I’ve thought about beauty products over the years and how it’s changed…..

I could have entitled this blog post, ‘Make-up through my ages’! My interest in beauty products has been sporadic through my life so far, but I’ve always erred on the side of caution when it comes to make-up. Even during the inevitable teenage phase there are no photos of me over-doing the foundation or eyeliner. In fact, tinted moisturiser was as far as it went and I didn’t even own a foundation until the grand old age of twenty. (Even then I hardly used it.) At school and evening college years, I might have put on powder and mascara, but that was pretty much it. Due to my unconventional teenage stage (having children and all that), there was a gap where I didn’t go out much at all, so never really bothered with putting anything on my face, other than Rimmel cover-up if I had a spot.

My next phase of make-up experimentation came when I was twenty-one; my youngest had finished breast-feeding, and we suddenly found ourselves with 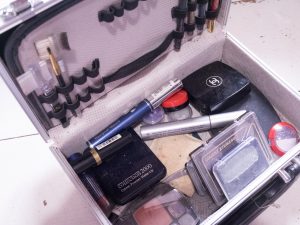 Why do I still have this stuff?

a group of weekend pub-going friends. So grandparents had the baby-sitting honours(!) and we joined them. I remember feeling very unsure and a little embarrassed that everyone else my age had had several years of figuring out how to do up their face for a night out, where-as I felt like a young teenager again and very unsure of what to do. Remember, this was before the days of You Tube tutorials! I think I winged it though, but really, apart from adding a little eye-shadow and possibly lipstick occasionally, there wasn’t a lot to it.

In the later Tonbridge years, and most of living in Somerset so far; I only really saw people at the school playground. This is the down-side of being self-employed and working from home. So it was back to a quick brush-over with powder to take off a bit of shine, and mascara so my eyes didn’t look dead. Now though, I feel I’m entering a new stage of life, and I feel it’s time to make a bit of an effort. (By the way, I am not calling this middle aged. I refuse to.) I think I am inspired by my sister, who, for the last couple of years has really made an effort and now, whenever I see her, even if she’s running after her little kids; attempting to toilet train her youngest, she looks smart and well-groomed. I think this has partly come about due to her own self-employment and wanting to represent herself and her business in the best light. It’s not a bad strategy, and I’ve been feeling a little shabby next to her.

My other reasons for needing put a little more attention to my appearance are You Tube and blogging. My image appears regularly in both, and I am amazed at how washed out and tired I look without much make-up, and let’s be honest with myself – even with what I would consider quite a lot of make-up! So it’s time for research. I am slightly shocked that most you-tubers’ “every-day” looks include contouring. I haven’t been living under a rock – I do know that contouring is all the rage, but every day? Really? I suppose it’s the golden-age of the selfie and if they want the world to see the best version of themselves, then they have to put the effort in. Well, perhaps in their eyes they do, but away from the camera, in everyday real life, isn’t all that just a bit 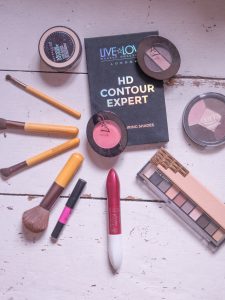 In my own personal real life generally I do very little. If someone comes to the door I’ll quickly lick my fingers and wipe under my eyes in the hope to get rid of any stray mascara from the previous day (or day before). By lunch time I might remember to go back to the bathroom to put on some No.7 Boots day cream in attempt to keep the wrinkles at bay. Then most evenings I do actually leave the house and see people, so that’s when the powder, mascara and eye-liner come into play.

So, if you, like me, haven’t had much time for make-up; I’m inviting you along with me, to learn about it. I am thirty-eight by the way, so maybe I’ll make a pleasant change from all the twenty-year olds on the internet with their tutorials and fancy night-time routines etc.  I expect I’ll be going back to the basics, so if you’re already a connoisseur of the make-up world, then you may want to skip these future posts. Or you may like to read them anyway, if only to laugh at my naivety! This blog post has actually been sitting in my drafts folder for some time, and since then I have purchased some new make-up to have a go with, so I have a few reviews to continue this theme with. You never know, I might surprise myself and end up calling myself a beauty blogger!