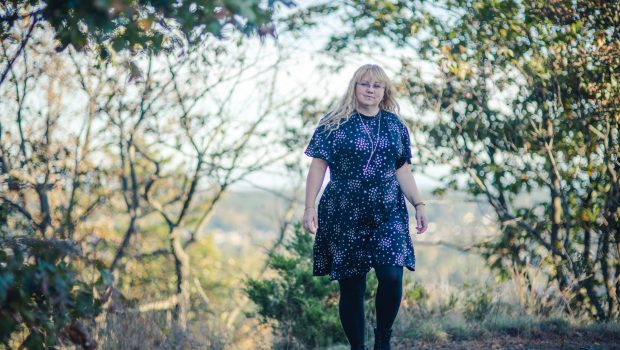 It was Saturday afternoon in October and the weather had turned unexpectedly warm. Local families had decided to make the most of it, the car-parking areas at East Rock Park were crowded. The little picnic area below the look-out point had people playing frisbee and surprisingly, British football. Couples and groups took in turns to take their photos by the wall where the landscape fell sharply down to a wide vista of New Haven…. 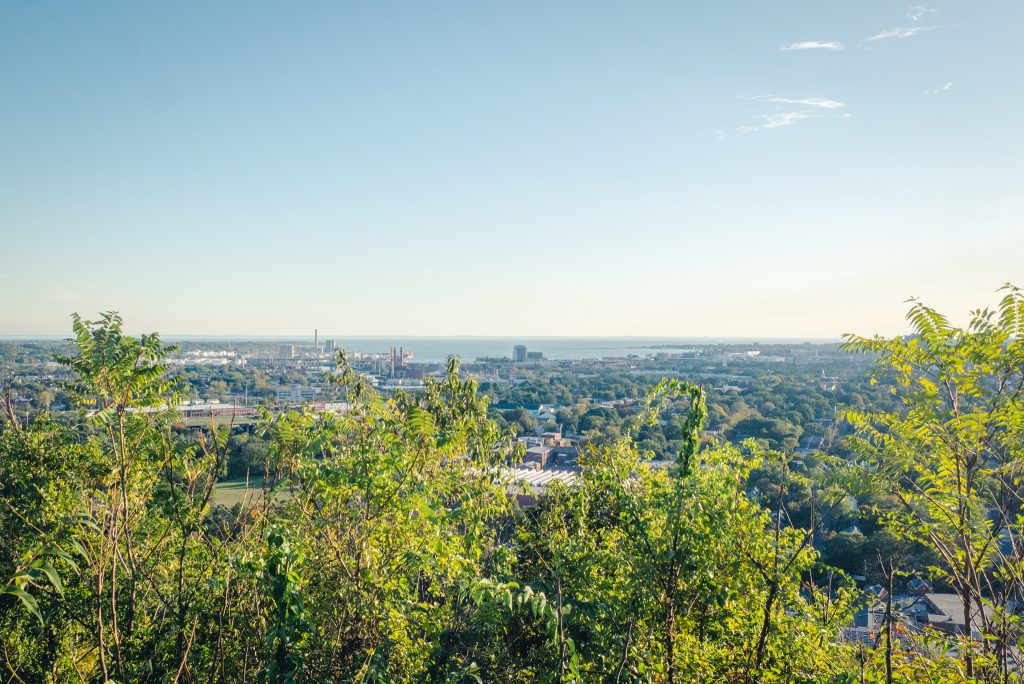 The park wasn’t quite what we’d hoped it would be, if I’m honest. Like I said, there was a small landscaped park area – I think it had a couple of barbecues available if you wanted to cook an outdoor meal. It was pleasant enough, but from down there, the view would be of the cars parked all around it and the sound of bikers with their music playing loudly enough to hear over their engines left running for ages. It wouldn’t be my first choice of alfresco eating spots. 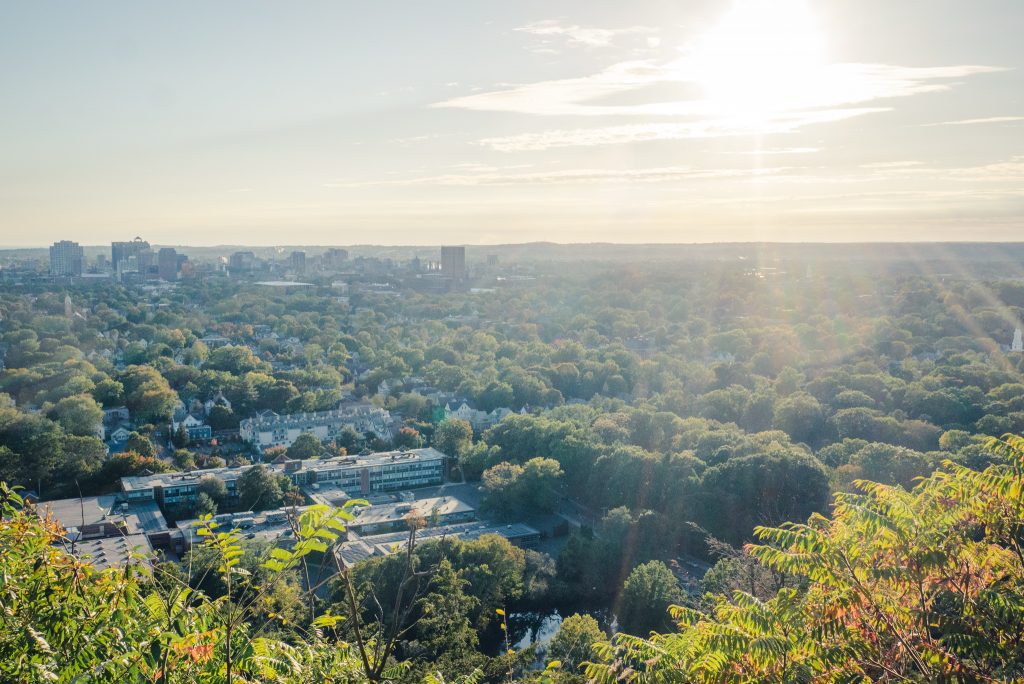 A view of New Haven

There was a footpath that led from the frankly very dodgy car park – lots of smashed glass on the ground from car break-ins – at the bottom of the hill and through the woodland to the top; however, there wasn’t much more to it. It was a tree-covered hill with an urban view; not really what we’d come to think of as an American park – most of the ones we’ve been to have been really impressive. The view itself was nice enough, but I expect very good if you knew New Haven and could enjoy looking down on and recognising the buildings and landmarks from above. The plaque showing what it looked like about a hundred years ago was fun and interesting to see. I hadn’t realised Yale University was in New Haven, so it was good to fill in that gap in my general knowledge! It was a great place to look down on the town, but I wish there had been some kind of map displayed that pointed out where important buildings were – it could have been a great tourist starting point before exploring.

Opposite the view stands a gated imposing monument to Soldiers and Sailors. It’s much quieter over there and a few people sat on the grass for a bit of chill time before heading off again. Because once you’ve seen the view, there isn’t really a lot more you can do! A scent of marijuana hung in the air, but I couldn’t tell where it was coming from.

We took the outfit photos behind and to the side of the monument, completely out of the way of everyone else. We even found a spot where through the trees that had started to lose their leaves for winter, you could see even further round the coast. 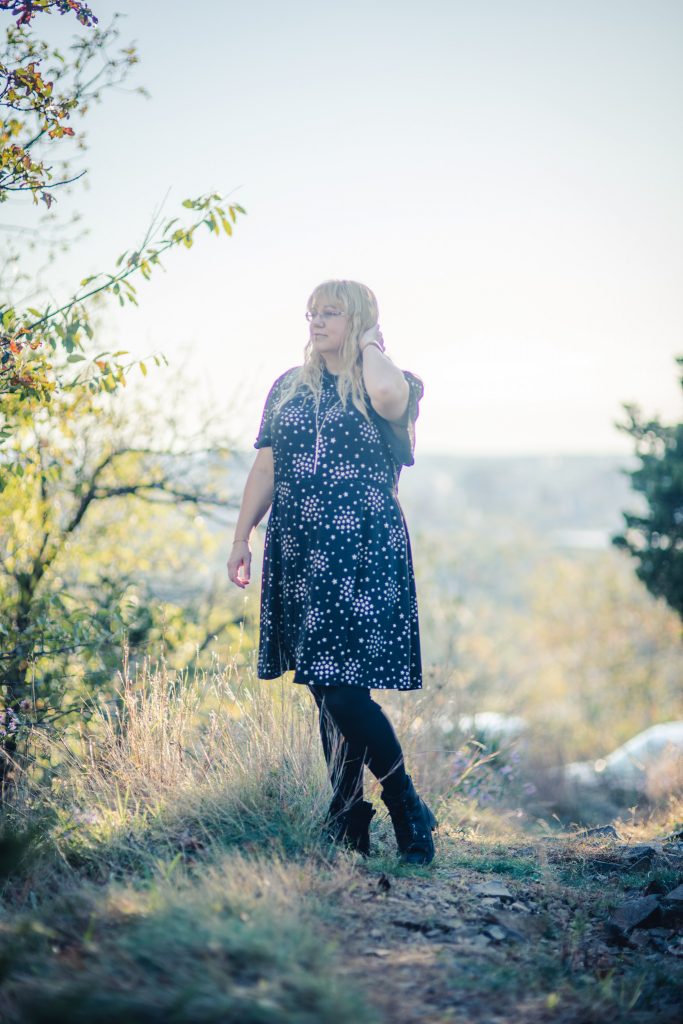 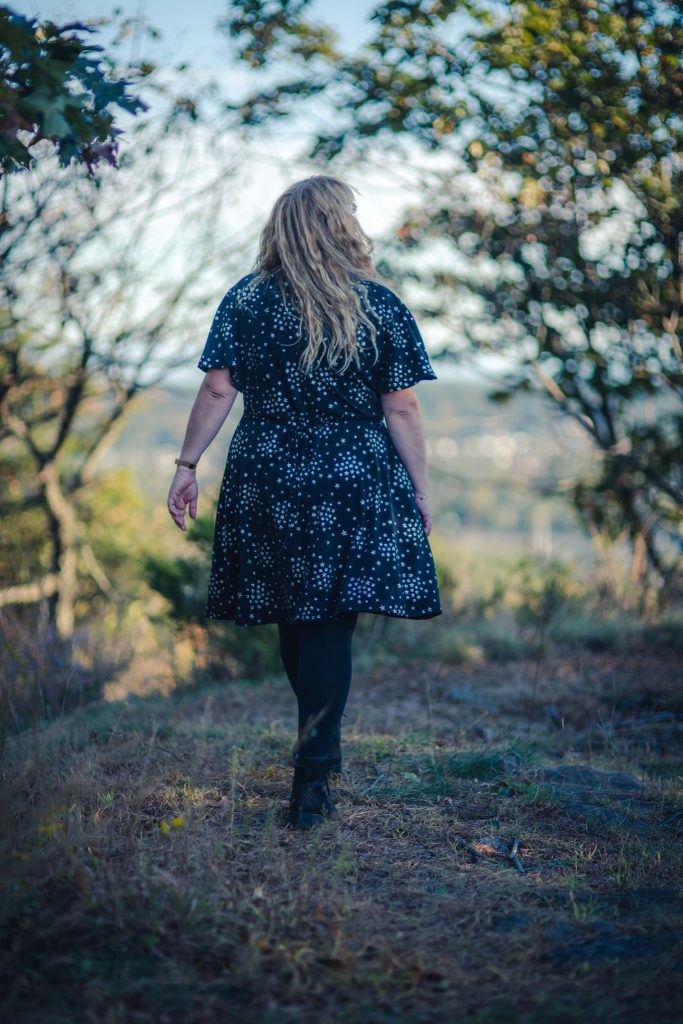 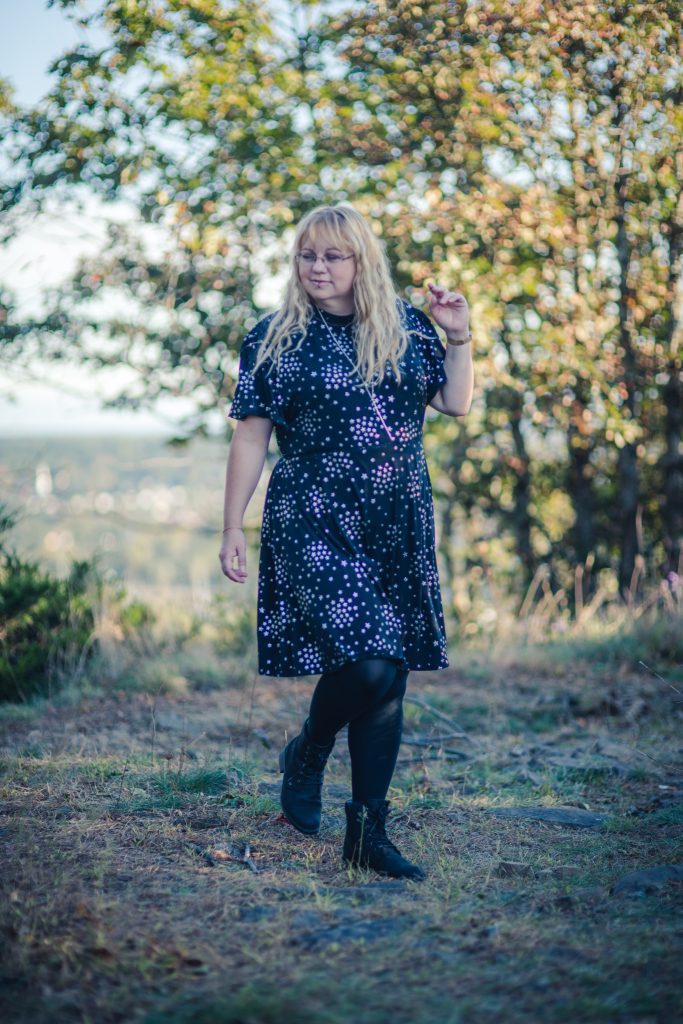 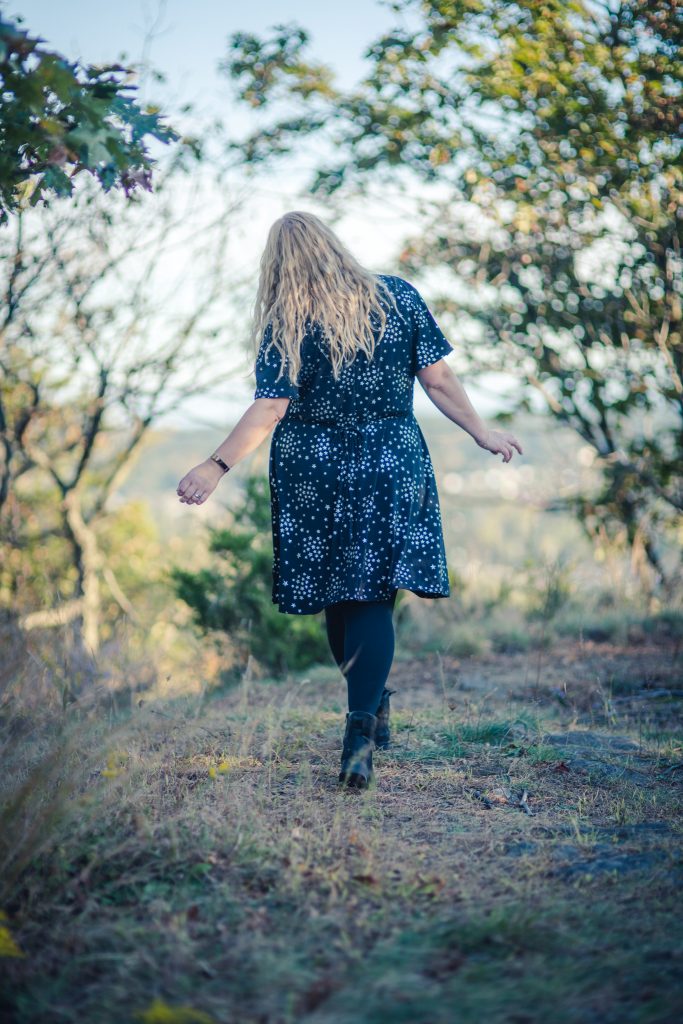 I was pretty chuffed when I spotted this dress in Next. I love anything celestial – I like the magical vibes you get from moon and stars patterns. 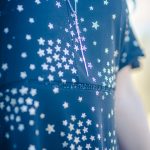 This could basically be a witch’s dress and that probably has a lot to do with why I love it! The black is understated for times when I’m not in the mood for a bright stand-out outfit, but the silver gives the dress a sense of occasion and celebration – perfect for New Year’s Eve! Also, every year at Christmas a group of writer friends have a meal together, and this was the dress I wore to that event as well. I like the fact that it’s quite baggy in style, but also has a seam at the waist to give it a nice shape so it’s great to be able to sit down and be totally comfortable! 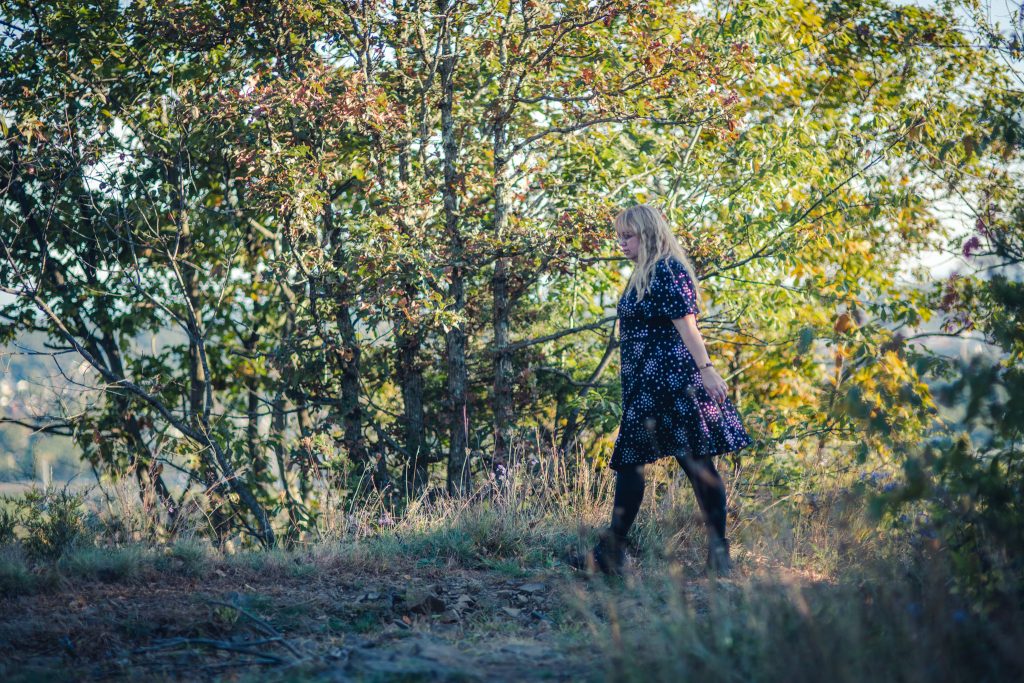 I wore the party dress with tights and boots for a cooler vibe, but it would also look great dressed up with heels. I also wore my silver Dumbledore wand necklace to complete the magical theme! 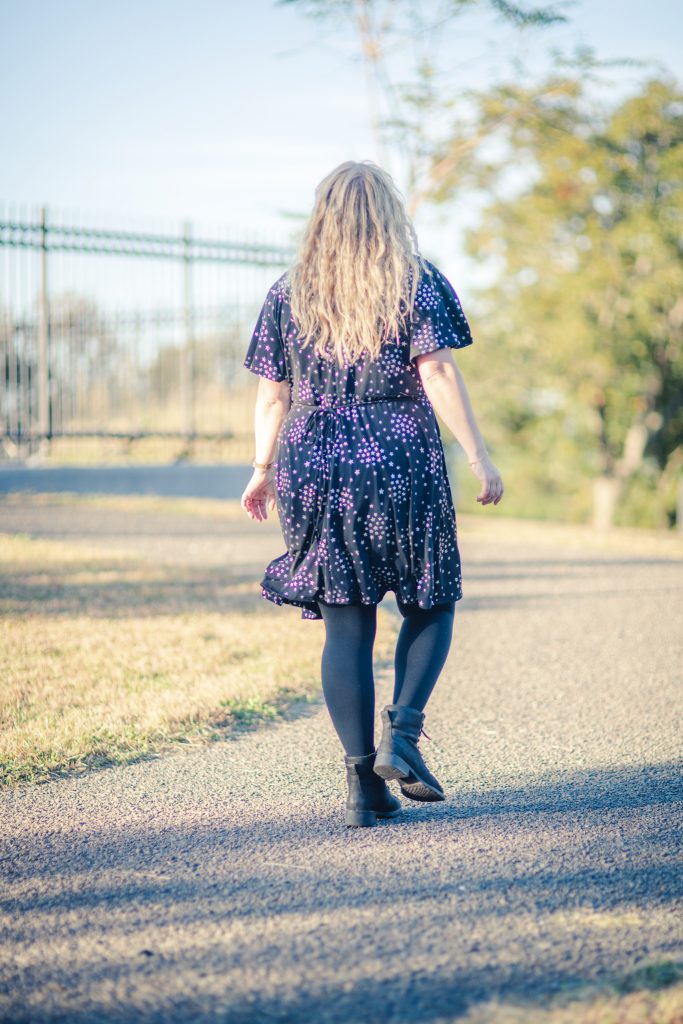 Addendum: After taking these photos, I actually decided that I wasn’t comfortable with the high neckline and have cut it and altered it to make a lower v-neck which suits me much better! 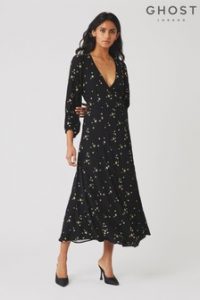 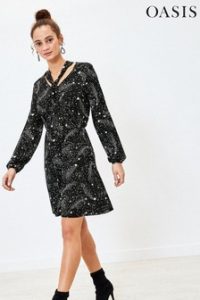 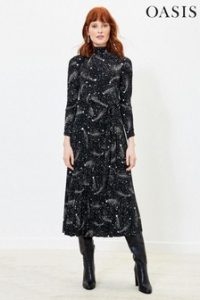 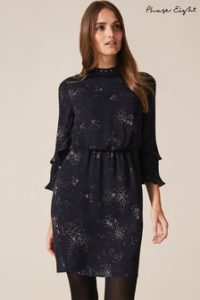 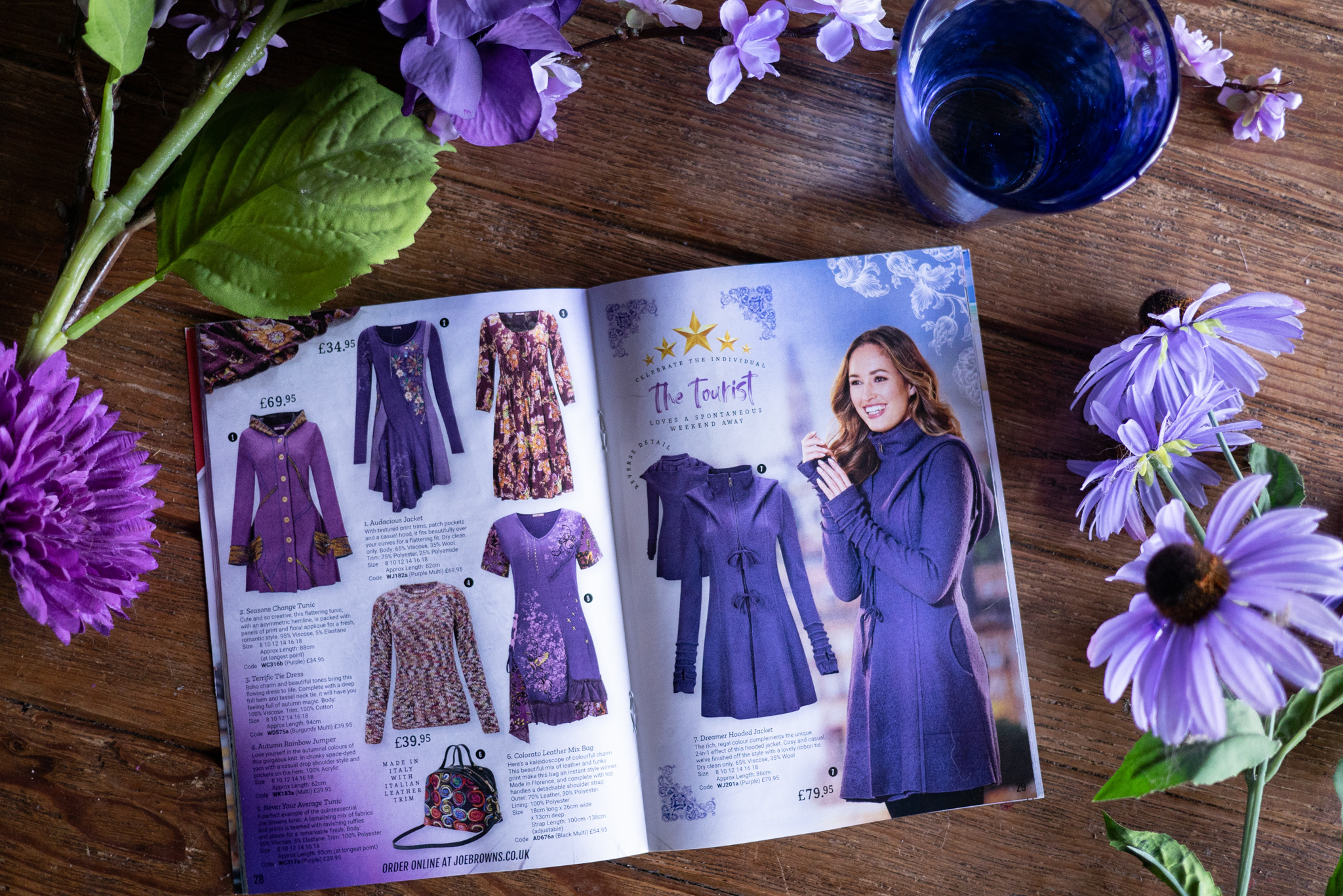 Joe Browns clothing, Autumn / Fall 2018
I always love it when a catalogue of the new season’s clothing from Joe Browns lands on my doormat. (Metaphorical doormat. We actually have a damp patch of concrete below the letterbox.) And this particular time, there was one item that made me get online to make an order. And it was a purple coat…. 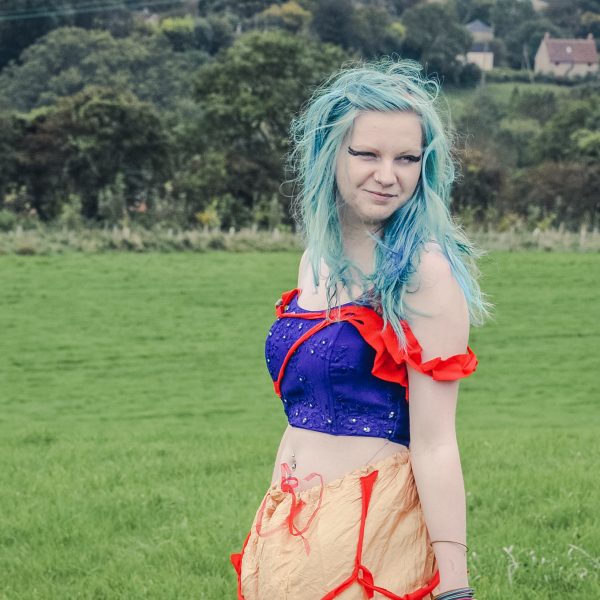 Scary Disney-inspired Costumes for Halloween
Halloween is on its way folks, and if you don’t want to go trick or treating in the same Sainsbury’s witch dress as everyone else, then now’s the time to be looking for an original Halloween costume. I love subverting the unexpected, so taking a cute wholesome fairytale Disney character, and then turning them into a nasty zombie or an evil version of themselves sounds like fun to me!… 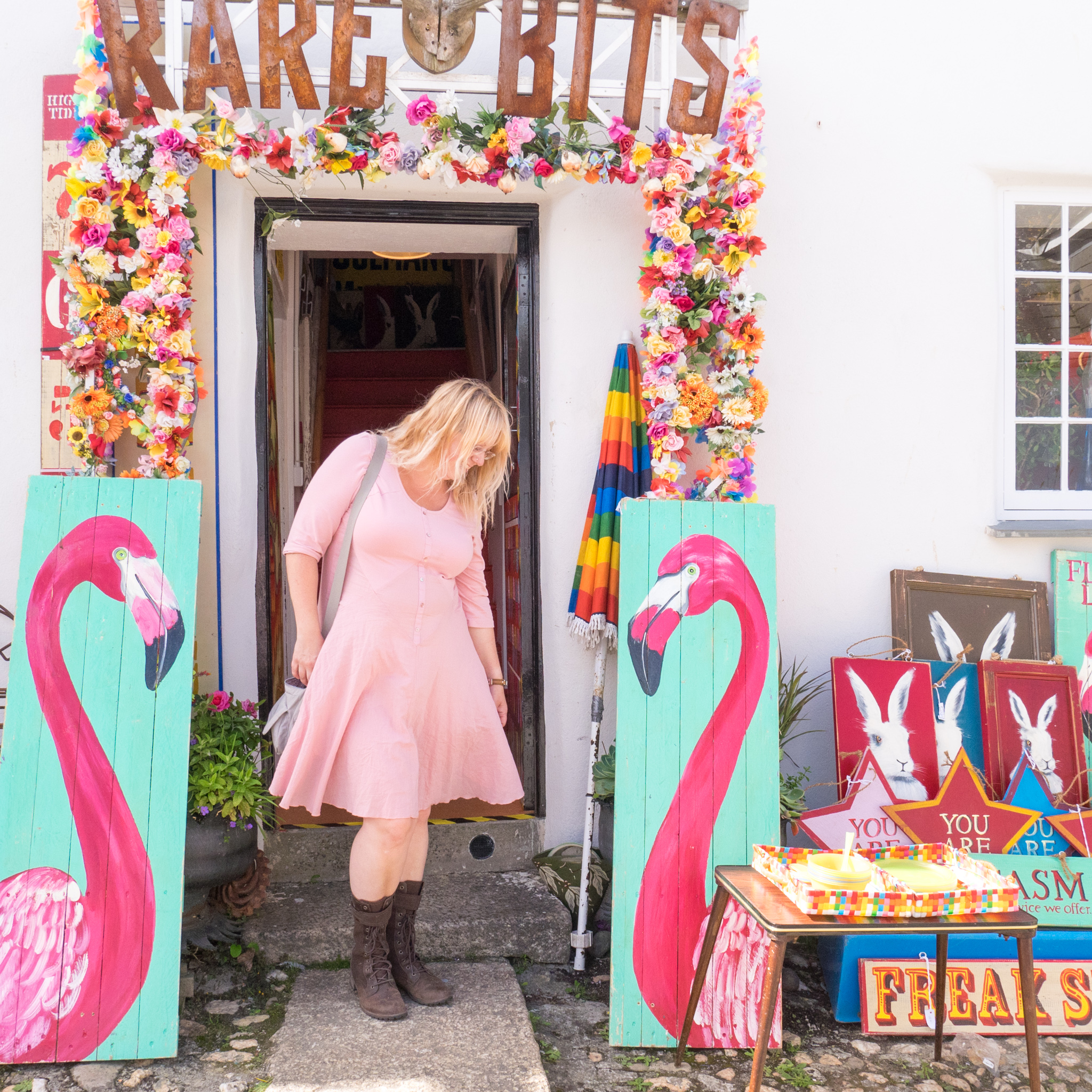 Styling the Spring/Summer 2018 trends: Pink
I have several items in my wardrobe of the dusky blush pink variety; but not so many of the brighter and pastel shades of pink that are on trend this season. I’ll have to be honest, is isn’t a shade that I think suits me very much, but this dress was so lovely, I wasn’t going to pass it by due to the colour! Some of these photos show how I styled it last summer, and some are from cooler days this spring, so they give you a couple of different ideas for how to style a pink dress….

My first year of bullet journalling – what I’ve learned so far!