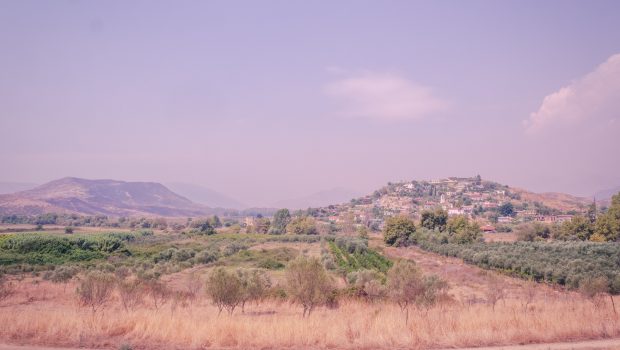 Yes, this one was a surprise to us too! By the way, this was written in my dairy during our P&O cruise two years ago around Greece, but one stop was at Albania. I typed up most of this blog post back then, but am only just getting round to finishing it! (I just thought I’d explain that to my regular readers who are wondering when on earth I went to Albania!)….

I didn’t go to Albania with any preconceptions, but I have to admit, I probably was expecting something a bit better than what we got!
The excursion manager didn’t really sell Saranda, Albania to us in his little talk about the place, so we decided to actually do one of the ship’s excursions for this port as it didn’t seem like there was much else to do. He was right, and I would recommend you allow enough in your budget to do the same. Whereas at other ports you often have other options to sight-see on your own, such as Hop on Hop off busses, private tour guides or even public transport and a guide book; here there’s nothing. It’s almost refreshingly quiet to walk out of the harbour with no-one trying to sell you something!

However, my parents were approached by someone offering to taxi them anywhere for ten euros, and if you walk up the hill to the right, there was a place where you could hire cars, and I think take an official taxi, so that’s really your only option to see any of Albania other than the town of Saranda. 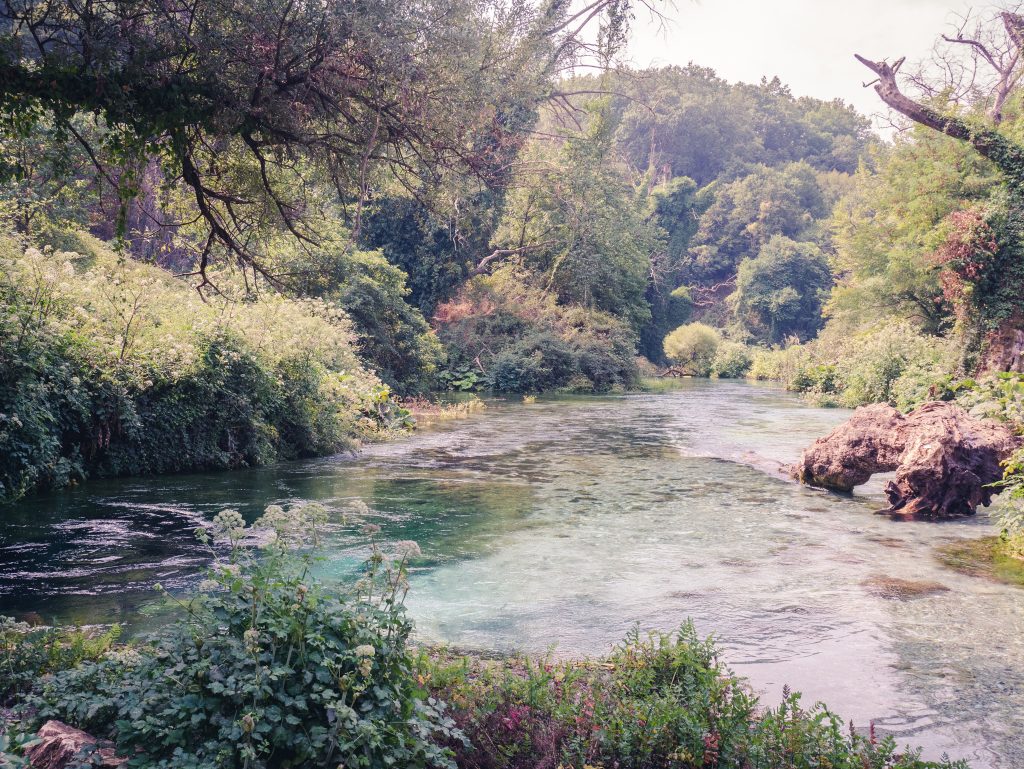 I’m glad we made the decision to do the coach excursion as I really feel like I’ve seen Albania now. The trip was called ‘Ancient Albania and Blue Eye.’ The other one that looked ok was the excursion to Butrint National Park where there was a Roman amphitheatre and other remains of the country’s different historic backgrounds. By this point in our cruise though, I think we’d all pretty much had enough of 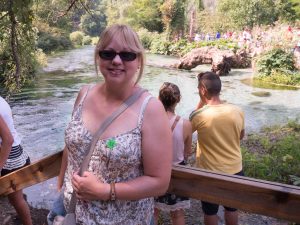 ancient remains and wanted to see something that was actually intact!

Our first port of call was the Blue Eye as it was likely to be too busy for the coach later in the day. It’s a fifty metre (at least) deep spring and the publicity photos made it look beautiful. The photos also made it look much bigger than we were expecting! At the point of the spring, the width of the water was about five metres, with about fifty people crowding around the shore line trying to take a selfie in front of it. It was clearly a tourist destination for locals as well as travellers from neighbouring countries as there were many different places represented from the number-plates of the cars trying to negotiate the narrow, windy, steep and unsurfaced road to reach the full-up car park. I would imagine it would be quite stressful to arrive by car. Our coach had a separate carpark from which we had a short walk to the spring.

Everyone threw a stone into the spring as we’d been told the water pressure would spit it back up again, but no-one saw any come up! Luckily the few people who were swimming in the freezing cold water got out after a while (there were signs saying we shouldn’t, but no-one enforced this) and we were able to take a few photos of the beautifully coloured and clear water. 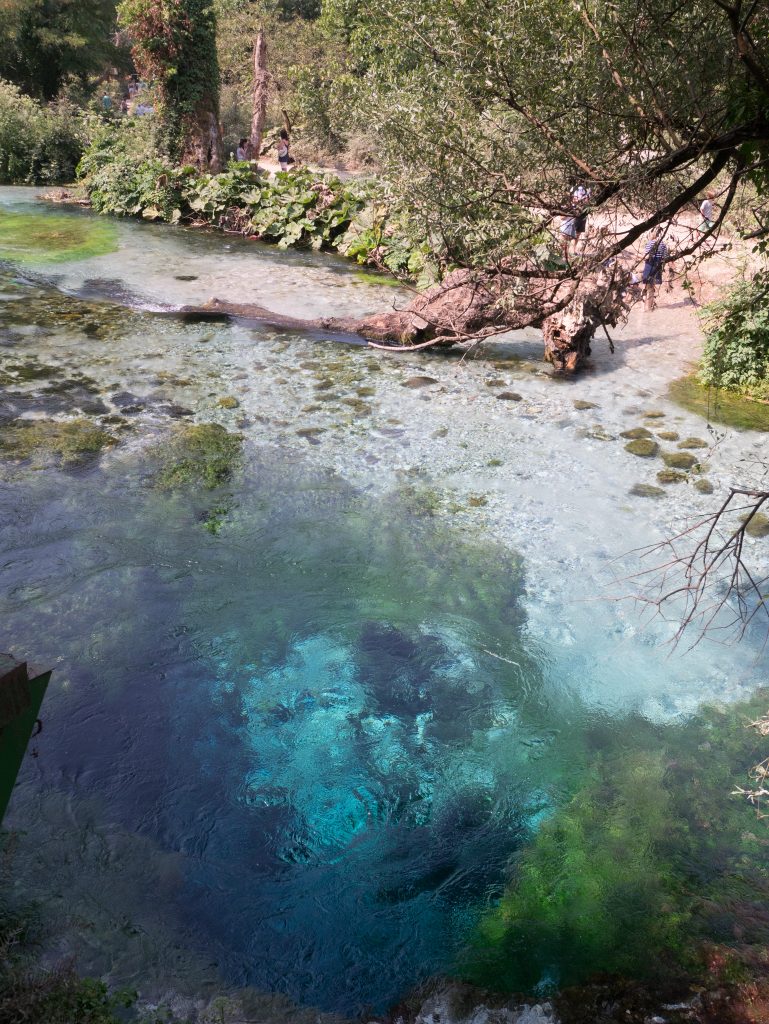 We had over an hour of free time here, but with nowhere else to go, everyone had no choice really other than buy a drink from the cafe so that we could sit in the shade. There was a public toilet, but not even a shop where you could buy a fridge magnet. I would say the place wasn’t really ready yet for the number of tourists it was attracting, and it’s only going to get busier as Albania starts to attract more. For example, the bridge we crossed over the river on had a couple of narrow planks missing. The viewing platform over the Blue Eye spring looked so rickety for the number of people crowded on it, Chris wouldn’t go up there at all (and he’s not usually bothered about taking risks like that!) and I kept one foot on solid ground while I was up there. 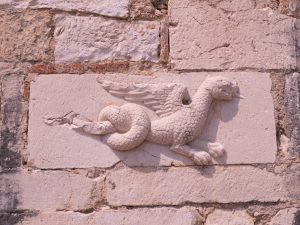 its history. Two entrances were built each side, one for Orthodox and one for Christians, but services were held together. Inside the walls were apparently covered in frescos and the floor is a massive dragon mosaic, however people are unfortunately not allowed inside in order to preserve it. In fact, the site is not usually open and can only be visited with a tour or by advance arrangement. 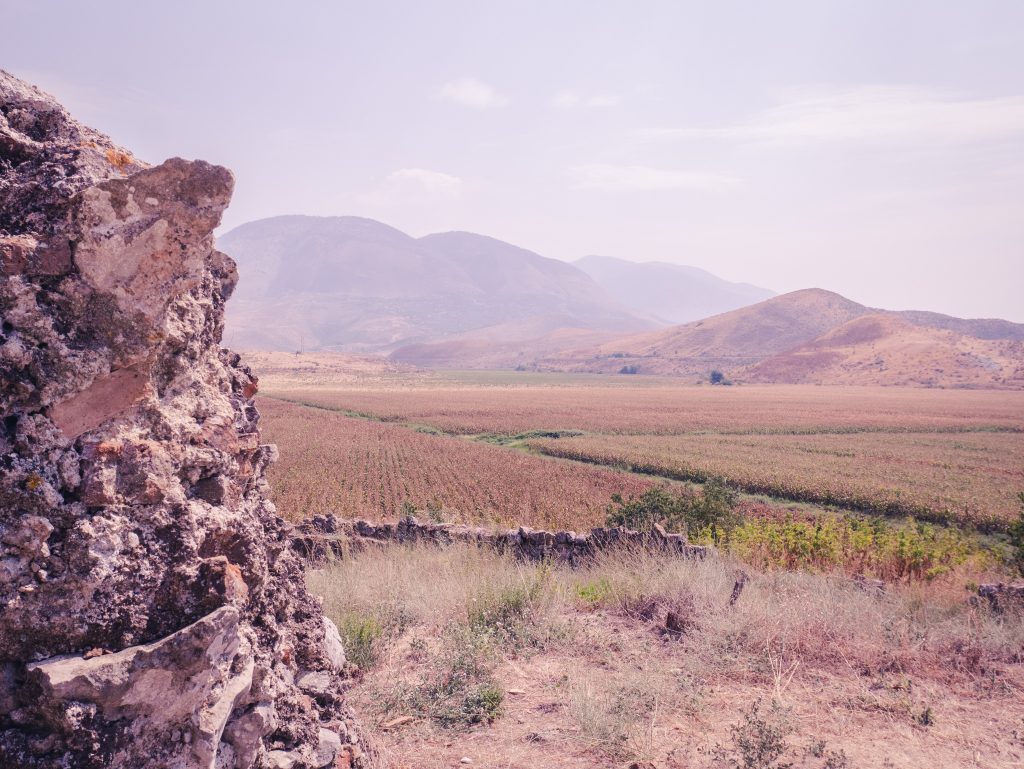 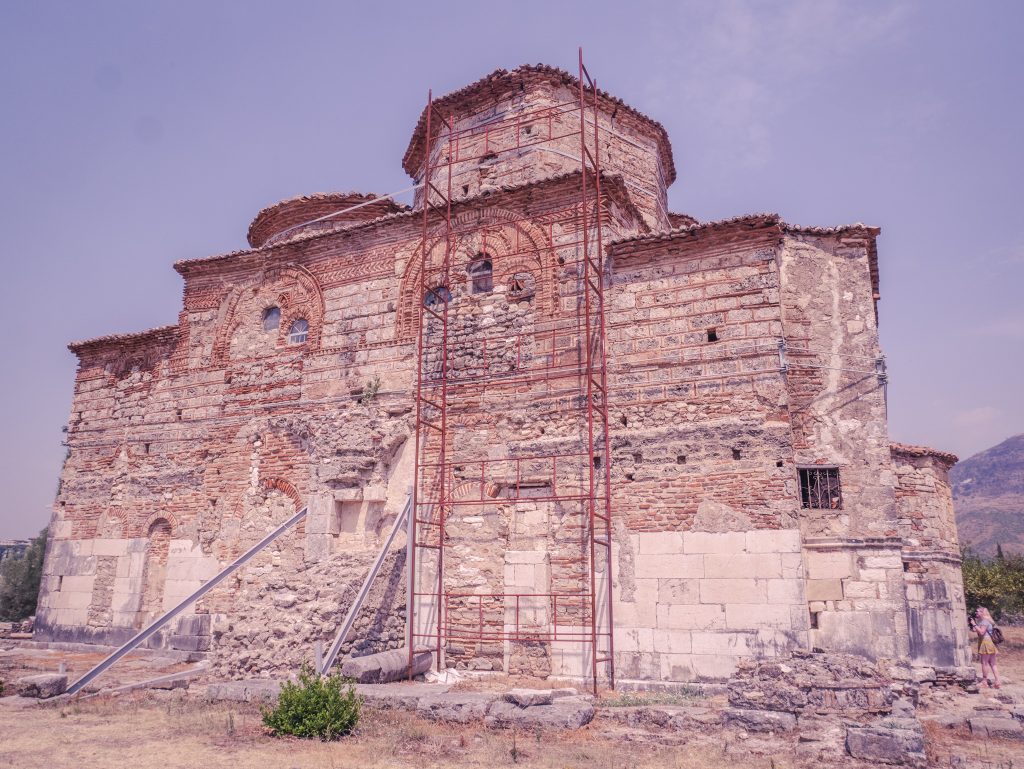 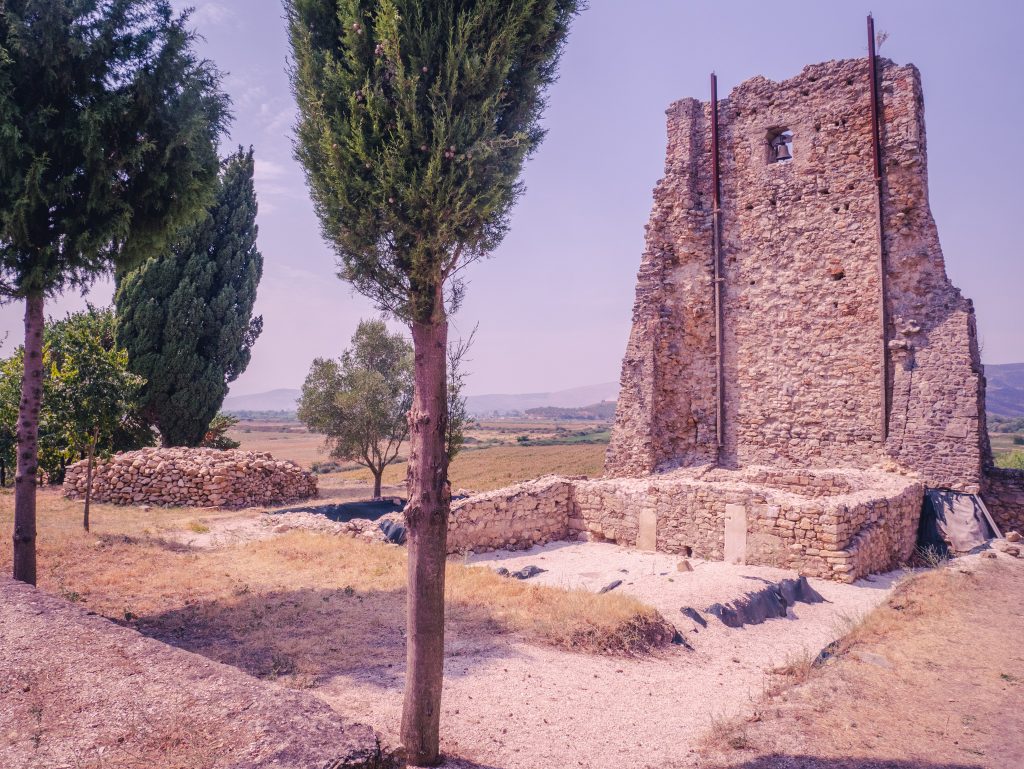 We then drove to a nearby mosque, which was interesting, but was in the process of being restored, so it was difficult for everyone on the tour to look around amongst the builders’ things! In fact a builder came in and told us – via translation from our guide – about how they uncovered inscriptions from the Quran, and how the woman were allowed up on the balcony while the men could worship in the main part of the building. 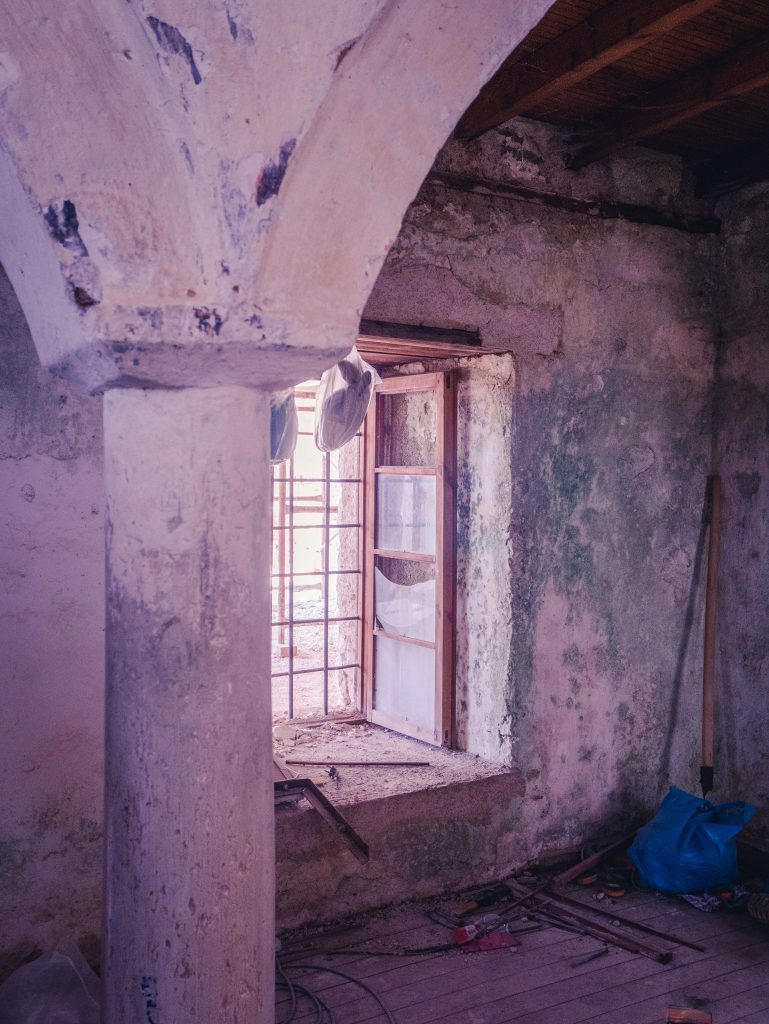 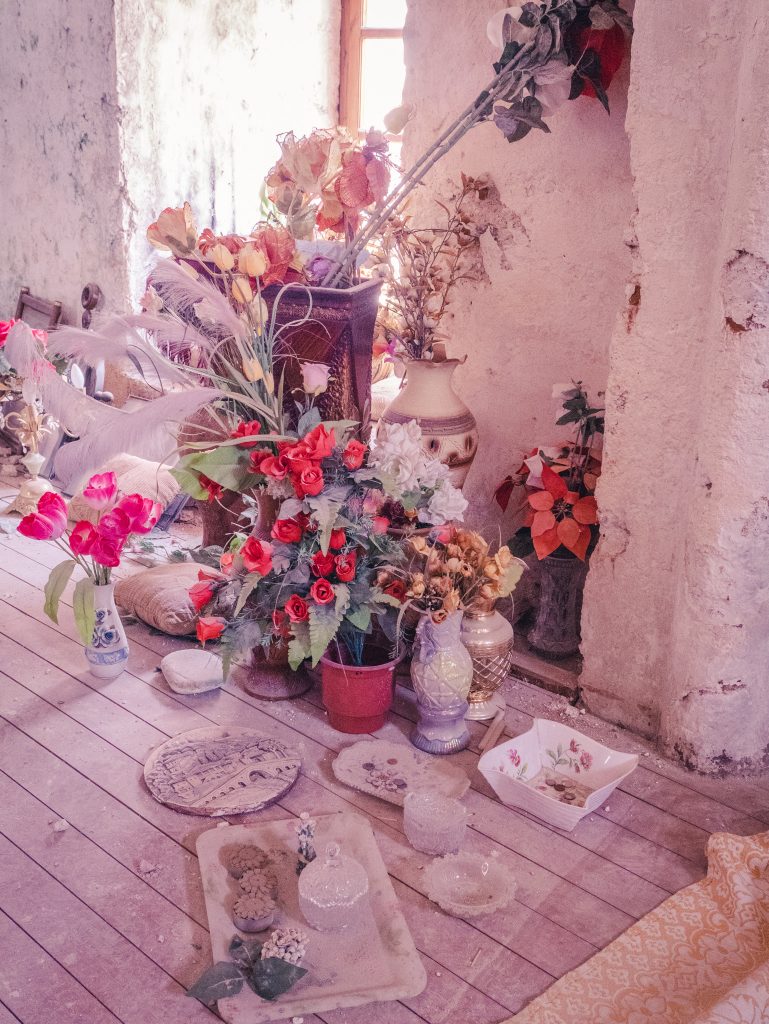 The tour guide we had on the coach was Albanian and spoke perfect English, and she told us a lot of information about the port town, Saranda, and generally about the complicated history of Albania’s rulers. It seems the country is still getting back on its feet after the communist regime that ended in 1990, and she was keen to tell us how they are encouraging tourism economy. She clearly wanted us to recommend Albania as a tourist destination, and maybe it will get there soon, but I don’t think it’s quite ready. I suppose it’s that chicken and egg situation where they need to the money to be prepared for tourists, but the tourists might not come until those preparations are made. And by that I mean things like the awful road and parking situation at Blue Eye. They could easily make more money there by having a shop. And I’m assuming there is no council/government refuse service because there was rubbish everywhere. When we drove through little towns, they just seemed to throw their rubbish on the street. And pile it up on the outskirts – I’ve never seen anything like it! However, I do get the feeling that things will pick up, and it’s quite cool that we saw Albania before it got all touristy!

A bit of practical information if Saranda is on your cruise port list: To give you an idea of timings, we had an early start and had taken the tender to port ready to start our tour at 9:30am. We were back again at 1:30pm. We had taken our beach things with us and left them on the coach, so that we could then go swimming in the Ionian Sea afterwards. We were back on board in time for afternoon tea! As I said at the beginning, I would recommend an excursion here, and don’t be put off if Albania is one of the countries your cruise is stopping at because it was interesting just to see something different.

Countries and ports seem to change fairly regularly, so here’s the P&O cruise website to see if a trip to Albania is available there soon.

Here is the vlog I made of our whole week on the cruise – our Albania trip was near the end if you’d like to have a watch:

The freedom of a smock dress